The General and the Con Torture Scandal 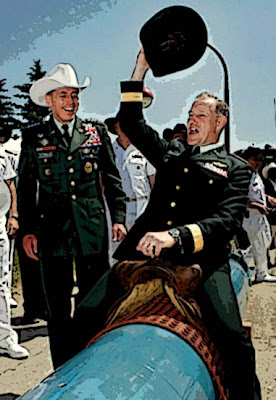 Now that Gen. Walter Natynczyk has jogged his memory, changed his story, and fired a torpedo into the Con torture and rape cover-up.

Gen. Walter Natynczyk, Canada's top military commander, is now saying a suspected Taliban fighter abused by Afghan police in June 2006 had been detained by Canadian troops, contrary to comments he made Tuesday.

And we know that the detainee who was abused wasn't the only one.

The sergeant also wrote that the man was photographed "prior to handing him over, to ensure that if the [Afghan National Police] did assault him, AS HAS HAPPENED IN THE PAST, we would have a visual record of his condition."

And that the Cons are liars or idiots. Or both.

The Conservative government has said there is no evidence that Afghan detainees in Canadian custody who were subsequently handed over to Afghan officials before 2007 were abused.

All I need to know now is why did it take them 18 long months to do something about it?

Why did they make sure that the detainees we handed over to the Afghans were the LAST to get a visit from the Red Cross?

It was while this odd Kandahar to Ottawa to Geneva to Kandahar shuffle was going on that detainees would be under the greatest threat of torture and other abuses.

Was it just a case of bureaucratic hyper-caution, flowing possibly from the micro-managing style of the Harper government? Or was there something more sinister at play?

And will Peter MacKay resign or be fired?

Because I've got a blue party hat and a black one, and I need to know which one to wear.

Although after reading that, and seeing this picture of the Con front bench in Question Period today, I'm guessing FIRED... 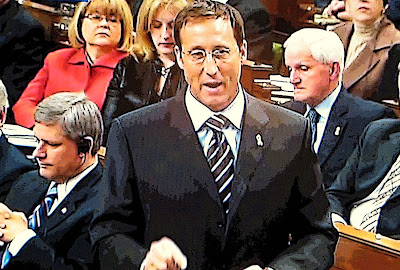 Because as they say a picture is worth a thousand words eh?

And when Stephen Harper looks like he's praying while you're up on your feet trying to defend yourself, you know it's the Con equivalent of finding a horse's head in your bed.

Next comes the stinky fish wrapped up in the Globe and Mail.

The record speaks for itself on what the Canadian government knows, or should have known, about the torture of Afghan detainees. It speaks far louder than the falsehoods from the government that have by now become routine. If these falsehoods are offered unintentionally, one wonders how senior government ministers can be so ignorant of the contents of such an important file.

Is this a government or the MOB?

His way to get rid of petey as competition for con Leader.

Harper has a scorched earth mentality toward Canada and it's reputation. He, with the 6000 mile screwdriver, is who should be held responsible. Maybe Mackay will throw him under on his way out. LK

My bet is that he will be replaced. A cabinet shuffle?
Or, he will resign but explain he is doing so from pressure from the opposition but that he still remains Nova Scotia's best loved playboy/bachelor/ uh....newly wed.

hi West End Bob...yes I thought of that. I read that Harper is obsessed with keeping the party in the hands of the ReformCons to keep the old PCers from coming back.
But I figure that since Dumbo stabbed the old PC gang in the back, Harper might want to keep him.
But as for me from the moment he launched that foul attack on Richard Colvin, the sooner he goes the better...

hi LK ... yes of course Harper is really the one to blame.He set the tone, and MacKay is just dancing to his tune.
I wish that MacKay had led a movement to bring back the old PC party, but as I told West End Bob, Dumbo is up to his neck in the same foul game, so he's going to have to walk the plank too... :)

hi anonymous...the prevailing theory is that Harper is too stubborn to fire him, but will probably have to replace him in a cabinet shuffle.
Do you think we'll get Max Bernier instead? Wouldn't that be lovely? ;)