Jason Kenney and the Apocalypse 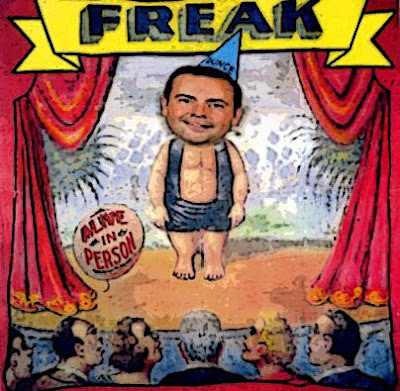 I used to think that Jason Kenney was just another Con buffoon. Especially after he declared that gay people could get married...as long as it was to someone of the opposite sex.

Because more offensive and dumb than that, and they give you your own freak show eh?

But now I think he's one of the most dangerous politicians in Canada. A man who when he forgets to shave reminds me of the idiot version of Joe McCarthy. A man determined to change Canada from a secular democracy into a quasi-theocracy.

A nasty political thug who smeared a decent Christian aid organization like KAIROS by calling it anti-Semitic. And then had the gall to deny it.

Heaven only knows what went on here. Maybe it's just general hamhandedness. Maybe they hoped the benefits reaped whilst people assumed they'd taken a stand against anti-Semitism and/or for Israel would outweigh the damage reaped by disavowing the idea on a day when everyone's shopping instead of reading the Star...

Whatever happened, it's a complete insult to Canadians' intelligence — and Israelis', come to think of it. And it's proof positive, as if any was needed, that nobody should put any stock in what any Canadian politician says. Ever. About anything.

The man who if you check the record seems to define EVERYONE by their religion. 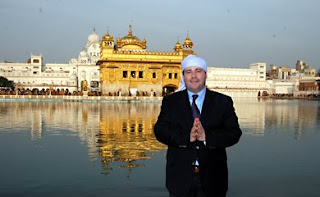 The Con operative who bounces around like the energizer bunny... with Jebesus as his battery...promising conservative religious groups that when they get a majority, women and gays will know their place in the New Canada.

The supporting-actor award goes to Jason Kenney. If you told me 10 years ago that a religious, unapologetic, hardcore conservative like our current Citizenship Minister would have a prominent role in government, I wouldn't have believed you. But there he is, doing his thing. And in today's Canada, he gets away with it.

But what is Jason Kenney REALLY getting away with? And why are these Harper Cons always trying to make people believe that they are the only ones who care about Israel ?

Answer: He's getting away with catering to the insane views of the Religious Right. Because the message is only partially aimed at Jewish voters. It's mostly aimed at the members of their rabid religious base, who are obsessed with Israel not because they care about Israelis. But because that's where they believe their Christian Messiah will appear, and float them up to heaven...leaving the Jews and the rest of us behind.

But not before a great battle takes place. A battle that many of these Con fanatics are obsessed with. The one Harper's little pet, the homophobe porker Charles McVety, is always babbling on about.

The Battle of Gog and Magog.

Oh. My. Goggy. I apologize for the length of the video, and its disturbing content. But believe me it was the shortest one I could find. And it does explain why these Cons claim to love Israel more than the Israelis. Why they are opposed to a Palestinian state.

Why they smear decent people who criticize Israel's policies for the most moral of reasons, by calling them anti-Semites and terrorist supporters.

And yes I know it sounds crazy. And it is. But then that's what shocked Chirac.

Stranger still are new accounts emerging from France describing how former president Jacques Chirac was utterly baffled by a 2003 telephone conversation in which Bush reportedly invoked fanatical Old Testament prophecy – including the Earth-ending battle with forces of evil, Gog and Magog – in his arguments to enlist France in the Coalition of the Willing.

And since Jason Kenney was one of the strongest supporters of the Iraq War, and so was Stephen Harper. And Harper belongs to an apocalyptic church, and his PMO has more powerful SoCons per square foot than George Bush's White House did....it can happen HERE.

And it already is. These ugly Cons are stealing our beautiful country from right under our noses.

We know what they want. We know who they are. 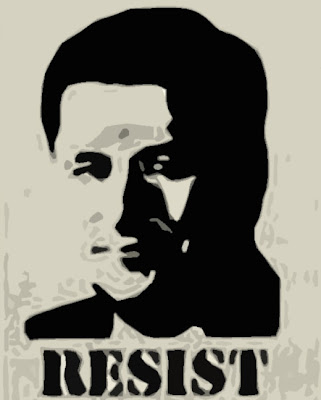 You got it right. It's all about the rapture or whatever they call it. That's all it is.

How many people among your readership remember Kenney following then-Prime Minister Martin around the world and embarrassing Martin by heckling him about same sex marriage?

He persistently did this and the Asian press were quite puzzled by it. Same-sex-marriage was the hot issue of the time and the Conservatives decided to harass Martin at every turn at every press conference about a domestic issue.

How low can you go? Kenney can do the limbo under the carpet.

It looks as though Kenney also has the transparent skin as has Richard Nixon. That's why he looks like he has a five-o'clock shadow most of the time. If I remember correctly, Nixon had to keep an electric razor in his desk drawer for that very reason.

These are not statesmen.

These are religious freaks trying to create their own religious nirvana.

A statesman cares about maintaining their own and other states.

These guys care about themselves, and the state provides them the capital to finance their personal goal.

hi Jymn...yes, the apocalyptic events of the last decade have shaken us all up, but they have driven the Christian Right into frenzy. So when I saw a SoCon like Jason Kenney rubbing up against Israel like a bitch in heat, I was naturally suspicious. ;)
But unfortunately our chicken media doesn't dare touch the subject, so many people have no idea what's going on, and now we're all going to pay for it...

hi Torontonian...I must admit I didn't know that myself. But now that I do I hate that creepy Con even more than I did before. Thanks. :)
On the other hand I do remember his chastity campaign, and knowing what that can do to a person's mind, nothing he does surprises me.What does surprise and horrify me is that he was voted best MP of 2009. Now isn't that DISGUSTING?

hi Dave...you're right no statesmanship and no class. This wretched gang goes around wielding morality like a club, when they are the most immoral group of Canadians I have ever seen.
They have debased our politics, raped our values, and shamed us in the eyes of the world.
My only consolation is that a lot of Canadians are finally seeing through the smoke screen, and hopefully decency will prevail and these sinister klowns will be defeated...

The evangelicals have the view that the end-times will occur in the "promised land" Israel, and
all things necesssary must be done to make the fulfillment of the prophecies take place.

That means an Israel with only Jews. That alone should explain much of Harper's policies to others in the middle east.

I read or saw on TV information that Israel has special people tracking the religious eccentrics who come to the land in anticipation of the second coming and the end times and the rapture.
One party of people were assiduously planting cedar saplings to help fulfill the prophecy that Israel was abundant in the cedar trees. Such people are typical of the eccentrics and at-the-edge fanatics that Israel has to deal with year in and year out.
-----

I remember 25 years ago watching Jimmy Swaggart on TV one Sunday morning going on about what he was against. Among the various groups were Arabs. He hated the Arabs because they were wrecking the US economy and the were overpopulating Israel--causing the Arab population to rise faster than the Jewish population. As a transplanted Quebecker, you know about this with the French and the immigrants. Back to Swaggart--not once in his 25-minute address did he use words like grace, mercy, forgiveness, salvation or redemption. All we knew was what he was AGAINST and not what he was FOR--other than Ronald Reagan and the 1984 re-election campaign. Swaggart still had credibility. His reputation hadn't collapsed by that time--that would come later.

But, the evangelicals and others who are Israel-Zion oriented and filled with the rapture and end-times prophecies are the ones who have the hearts and minds of much of Harper's cabinet and the Conservative party.

There has been a falling away in the Republican party in the US and perhaps that same thing will happen here when more Canadians see sense and start to ask the "impertinent questions" that ought to have been asked before the 4th estate was gelded by a crypto-Christian named Stephen Harper.

I've said it before and I say it again: It's time for us to take to the streets and bring and end to this denigration of democracy.

By the way, if Jesus were to come back today, I'd believe he'd be a New Democrat.

Give Kenney and his buds in the CPC the right psychotropic drugs and they can have their blessed Rapture. And leave the rest of us sane people to live our lives in peace and with respect for the planet and its inhabitants.

If only it were so simple.

Nice post Simon. Spread this one around: I call for the Canadian Men's Hockey Team to be nicknamed the Proroquers - especially if they play an effective shut-down game.