Richard Colvin and It's a Con Life

Well I see my hero Richard Colvin is a WINNER. He must be if even Don Martin says so.

His 16-page rebuttal, running up against a Conservative boycott of a committee probing the Afghan detainee controversy and curt "no comment required" from the Minister's office, suggests a Richard Colvin public relations victory is possible, if not probable.

So watch the government's behaviour in the months to come. If it keeps obstructing documentation, boycotting committees or even proroguing Parliament, those will be the sure signs Richard Colvin's one-man battle to free the truth is triumphing over a government cover-up.

Even if he practically CHOKES on it. But who cares eh?

Or is it just a dream? 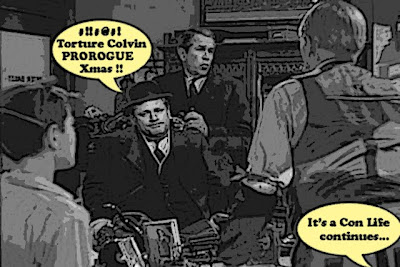 And so does the nightmare.

The Prime Minister is now in such command that he can get away with pretty much anything. And he is lauded for his conquests.

The key is that once you've established such a pronounced degree of control over the levers of power, you're in position to strong-arm your way past anything. And so the government has halted hearings on the detainee file by boycotting them. And so the government is threatening to prorogue Parliament again so it doesn't have to face more detainee music.

It's more evidence from a stockpile of how the system's been brought to heel. It's democracy Canadian-style.

Oh boy. From a parliamentary democracy to a banana republic...or Big Brother's House of Shame ... in just 1,410 days. Never has a great country gone down the toilet faster.

Will the left ever unite .... or form a mighty coalition...to sweep these sinister Cons from power FOREVER?

How soon can we have a public inquiry?

When will this bad movie FINALLY be over ?
Posted by Simon at 9:22 PM

Don Martin is speaking the truth in this article with a minimum of couching. Some couching remains, though.

Until he releases the Harper Government Handbook for Harper Party Dummies of Disrupting Parliament that he has already printed that he has a copy of, most Canadians are going to have to take his opinions with more than a grain of salt.

Or else reveal why he cannot release it as a bona fide journalist a piece of the truth. Maybe the Harper Party Government sued him? Who knows why he keeps it under wraps?
Someone does. Not least Don Martin.

hi Liz...I find that Don Martin bats hot and cold. And his reporting on this torture story is definitely not his best work. I find his cynicism disturbing, and the way he dismisses that documented case of abuse disgusting. Which is why I find this article at least somewhat better..especially since I can see him writing it with a scowl on his face.
Most of the media is FINALLY turning against Harper so he might as well join them.
And thanks for reminding me about that Con Handbook which has to be one of the most outrageous document these authoritarian Cons have ever produced.
Gawd.Harper and his thugs have done so many outrageous things over the last four dismal years it's hard to remember them all.
One of these days I'm going to have to sit down and make up a long list to use against them in the next election... :)