So How are the Cons Going to Explain This One? 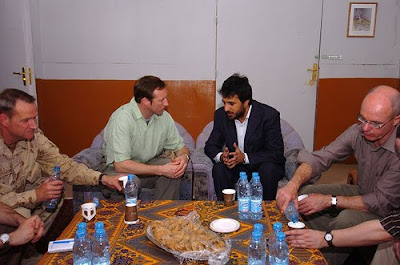 A former governor of Kandahar who is accused of personally torturing Afghans might have been removed from office as far back as 2006 if Canadian officials hadn't defended him, according to diplomatic memos that have never been made public by the Canadian government.

"As far as I know, Canada has never suggested to (President Hamid) Karzai that Asadullah be replaced," says the memo, dated Oct. 24, 2007.

"In the one meeting where the subject was discussed, in July 2006, it was the president who raised the issue; Canada defended the governor, thereby ensuring his continued tenure."

Defended him despite the fact he was known to beat and electrocute prisoners in his own private torture chamber.

Defended him even though his brutality would lead to disaster.

The warnings about Khalid - whose brazen decision as governor to display the battered dead body of a revered Taliban leader Mullah Dadullah to local Afghan media, before refusing to return it for a proper burial, triggered a massive bombing campaign in Kandahar city in the spring of 2007 - were heard loud and clear in Ottawa.

But still they did NOTHING.

Oh boy. The other night I looked at some of the things the Harper Cons might be trying to hide.

Now add this sordid episode to the list, and ask yourself what kind of pattern is beginning to emerge.

They knew that torture was going on, but they buried Richard Colvin's warnings, and lied over and over again to Parliament. They kept a governor in office who was a well known human rights abuser. They insisted that prisoners should be handed over to Afghan intelligence agents, trained by the KGB, as SOON as possible.

The moment a detainee was captured, Fraser said, he had to notify his boss in Ottawa, Lt.-Gen. Michel Gauthier.

"As soon as I got a detainee, I would phone him," Fraser said, adding the question he got back was: "How fast could we get them to hand over to the Afghan authorities?"

While making sure that the Red Cross would not get to see those prisoners for as LONG as possible.

Then ask yourself if this doesn't sound like a conspiracy to enable torture. And could this be what the Cons are so desperately trying to cover-up? Because they know they could be charged with WAR CRIMES.

You know like most people in this country I can't be sure what's going on. But I think I see the shape of something monstrous out there in the darkness. Something that needs to be lit up by a flash light ...or a flare.

So I agree with this editorial.

Canadians did not elect a politburo in last year's federal election. They elected a minority Parliament that can survive only as long as it commands a degree of opposition support. Harper is squandering that support with his reflexive secrecy, abrasive partisanship and compulsive stonewalling.

Because some things I do know: Richard Colvin is my kind of Canadian.

Stephen Harper is not my kind of Prime Minister.

And for the sake of our country's soul, now more than ever.

Ahhh, the old governor of Kandahar.

Yes, well I have a new one. Let's talk about in-field transfers where enemy surrendered to Canadians after an action but were immediately transfered to the ANA under-training group present in the field.

Technically, never under Canadian control, therefore not subject to any prisoner transfer agreement.

Run with it Simon. You're good at this.

"Defended him despite the fact he was known to beat and electrocute prisoners in his own private torture chamber."

Vague generalizations! No proof! Allegations from our enemies the Taliban! Uncanadian antipatriotism!

They'll fill it in with some extra verbiage, of course, but I think I have your answer for you.

hi anonymous...yes that's what I think too. Right,left,right,left and into the sunset... :)

hi Dave..thanks for that. Coming from you it's the kind of comment that makes my head swell alarmingly. But yes I am concerned about this story. I'd hate to see soldiers smeared for the actions of Generals and Cons.
And I can't help thinking, bloody Kandahar, Blowhard Hillier, Mad Dog Gauthier, and Stephen Stalin Harper. What a perfect storm.
As for Asadullah...I recommend this story http://thegallopingbeaver.blogspot.com/2008/02/good-morning-steve-today-in-parliament.html
Because this guy really know what he's writing about... ;)

Vague generalizations! No proof! Allegations from our enemies the Taliban! Uncanadian antipatriotism

But how can you forget failing to support the troops?

Because after all they are hiding behind them... :)