So What Are the Cons Trying to Hide? 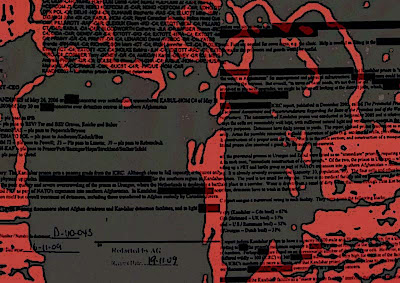 Well at least now we know this: somewhere in a pile of heavily censored documents, is one mother of a revelation waiting to go off like a bomb.

In the faces of Stephen Harper's Cons.

Because when they wheel out the ridiculous SoCon Doris Day...the Minister of International Trade... to tell us what other parliamentarians can or cannot read.

"There are details of which, if they were to be publicly made available, would only help the enemy. So the law is very clear that there are situations where there could be security issues where certain elements of an operation must be protected."

So what ARE these Cons trying to hide? Since I'm not a Con or a General I can't know for sure. But here are some educated guesses:

(1) In the bloody year of 2006, when almost five times as many Canadian soldiers were killed than had died in the four years before, we retaliated by taking a lot of prisoners... including many innocent farmers. We weren't too fussy about happened to them in the hands of the Afghan police. And this hardline policy was ordered by the high command and the Cons in Ottawa. Even though they knew that Afghans were being tortured.

(2) As a result of this policy, Canadian soldiers reported numerous instances of abuse, but they were suppressed and nothing was done about them for eighteen months. Even though the Cons were aware of these reports they chose to look away, and let the Afghan torturers extract as much information as possible.

(3) Somebody in Ottawa set up a scheme to ensure that the torturers had enough time to extract that information, by dragging their heels as long as possible, before informing the Red Cross.

It would be difficult to conceive of a slower way to bring Red Cross protection to a detainee.

Was it just a case of bureaucratic hyper-caution, flowing possibly from the micro-managing style of the Harper government? Or was there something more sinister at play?

If you wanted to ensure your detainee was grilled to the hilt over days, weeks, or months, would this not be the kind of play-for-time system that you would devise?

Which, if true, would be a WAR CRIME.

(4) Canadian troops were still handing over prisoners to the Americans, even though the previous Liberal government had ordered that practice stopped.

(5) Stephen Harper was micromanaging the war from Ottawa, so he knew EVERYTHING.

Because let's never forget that back then he was posing as Great Warrior Leader.

He was determined to show Rick "Blowhard" Hillier that he was The Boss. 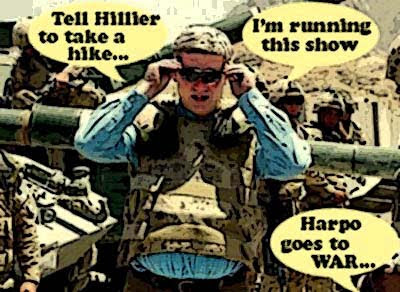 Because he's a control freak AND a student of Stalin.

Which explains why this sinister authoritarian Con is trying to muzzle our Parliament, and turn Canada into a closed society.

The departing chair of the Military Police Complaints Commission has taken the Harper government to task for refusing to renew his term in the middle of a major public inquiry into the Afghan detainee controversy.

He said his departure will effectively halt the commission's ability to continue the public hearings - and send a "chill" through other quasi-judicial bodies whose heads are appointed by the government.

And why enough is enough.

Releasing the Afghanistan documents will not endanger our troops. Failing to release them threatens the foundations of our democracy.

These monstrous thug Cons have gone too far. The lights are going out in Canada. Now more than ever.

Here here, but personaly I want an international tribunal to do the investigation. Being caught as liars and criminals is not enough, I want them tried in a world court to embarass the hell out of anybody who'd dare to to sell this neocon shit in our country again.

As for my government standing on guard for me, I'd be more grateful if I knew from whom I actually needed to be protected. By any conceivable standard, we Canadian Jews are surely among the most privileged, most secure, most successful, most influential minorities in Canada and indeed in the entire world. We don't have a powerful Christian right-wing that is openly prejudiced, as in the United States, and the anti-Semitic incidents that do occasionally happen, while deplorable, are almost invariably caused by kids, crackpot white supremacists or marginalized thugs.

Who said that? And what do the Cons have to hide?