Stephen Harper and the Bonfires of Democracy 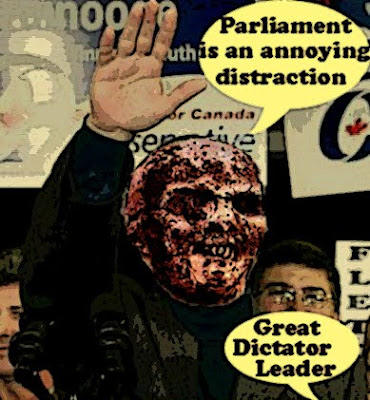 So how do you like my monster now? Isn't he pretty?

I could also ask why so many, were so blind, for so long.

But I won't. Because of course the real question we should ALL be asking ourselves tonight is what are we going to do about it?

The question is: what will Parliament do now? If historical precedent is any guide, it should meet anyway. Let those MPs who wish to do the people’s business convene on the usual timetable, and let those with other loyalties disport themselves as they may.

Because Parliament should keep running. And by so doing send a message to Stephen Harper and Michaëlle Jean: This Parliament belongs to the people and you will NOT shut it down. You crazy power hungry control freak, and you miserable Con collaborator.

But it's got to be more than that, because saving our democracy is the duty of ALL Canadians.

So this is encouraging.

Stephen Harper is a despot. The decision to “padlock” Parliament is a cover up designed to avoid scrutiny over the Afghan detainee issue. The Conservatives have a very thin legislative agenda and no new ideas to put forward.

Because it's good to see our servile right-wing media criticizing Harper, instead of polishing his ass with their noses.

But still it's not enough.

Our leaders need to stop fighting each other while Canada burns, form a broad coalition of national salvation, and call us into the streets.

So we the people can vent our outrage, and let that tinpot dictator know exactly what we think of him.

There will be time in the days ahead to think of the many ways we can bring pressure to bear on this tyrannical government. To come up with many wonderful new and creative ways to attack it and SHAME it into submission.

But tonight I want to suggest that our leaders should organize a series of giant bonfire rallies for democracy across the country. With bonfires so big they will light up the sky the colour of Canada. 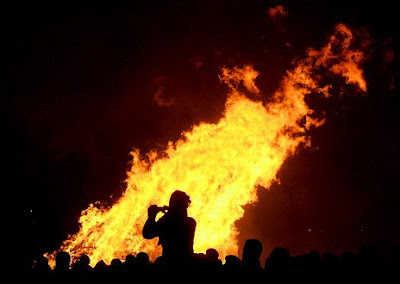 Because the old and the boring isn't getting us ANYWHERE. We need to do things differently and make them as big and as spectacular as our great land.

So the whole world can hear our message. And the sinister political thug that is Stephen Harper will see his fate writ large.

We WILL get our country back.

And the monster will be DEFEATED... 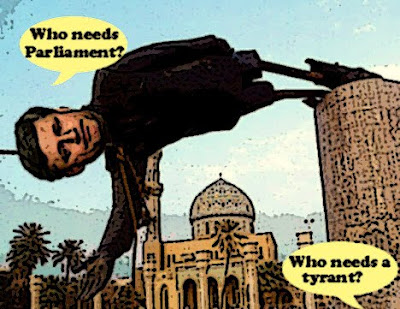 What especially bother's me is that the Conservatives have called this move "quite routine."

YEa, the "quite routine" comment was on CBC tonight... flipped me out....

The committees should definitely keep meeting and publishing everything they find!

Thank you Simon for stating so eloquently how many of us feel.

hi Mark...yes it is outrageous isn't it? Thinking that they can switch Parliament on and off like a lamp. Can you imagine what these thugs would do with a majority?
Parliament would meet about four times a year, and only to pass a motion congratulating Great Ugly Leader for being such an outstanding dictator. *Shudder*
BTW...congratulations on winning the CBA for best LGBT blog. You deserve it. :)
Happy New Year !!!!

hi Peter...what is becoming routine is how these ugly Cons debase our Parliamentary system. But then we shouldn't be surprised. The first person who remarked on Harper's authoritarian tendencies, to my knowledge, was no less than Preston Manning. When Harper was the Reform Party's policy adviser, and as the Parson noted, was always sulking and stamping his little feet, claiming that he knew best.
So it's an old story that's just getting worse. :)
Happy New Year !!!!

hi Tom...well thank you for saying that. I know we're all going through a horrid time. But the main thing is we mustn't give up.
As I said in another post it's always darker before the dawn. And won't the day Harper is finally defeated be a WONDERFUL one?
Think of the party we'll have. :)
Happy New Year !!!