The Montreal Massacre and the Great Betrayal 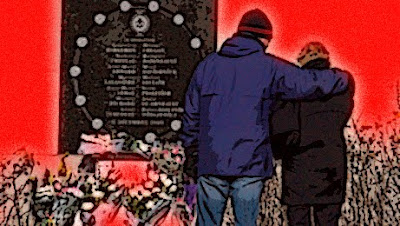 I wish I had been back in Montreal today to lay 14 white roses at the base of this humble monument.

And remember all the murdered women.

And the snowy afternoon their young lives were snuffed out, by a man with a gun.

In a frenzy of misogynist violence.

I've left flowers before. It's always a sad occasion. But this year would have been the saddest anniversary of all, because of the great betrayal.

The sickening event that I wrote about in November, here and here.

I think they were the hardest posts I've ever written. I took quite a bit of heat for them, even from some friends. And I found out today, that last post elicited this comment from another Progressive Blogger.

I’m sorry, but an emotional appeal to that tragedy does not a good argument make.

In fact, trotting their memory out to appeal to your own partisan gains is distasteful and disgusting.

Can you believe that ? Too emotional about a massacre. Or the lives of women and police officers, and paramedics. Must be my feminine side eh?

Distasteful and disgusting for attacking Harper's Cons, for scrapping the gun registry and assaulting women's rights from the very moment they came to power?

Oh boy. Am I dreaming or is the world upside down? I guess I wasn't clear enough.

So I should just say I AM a gentle and emotional person, and I do believe in a kinder, gentler, world ....where feminist values predominate over those of the bloodthirsty patriarchy who are leading us all to destruction.

But I'm also a fighter, in the ring or out, and when it comes to the Cons I'm not gentle at all. Because I believe that if we are going to beat those political thugs who are raping our precious Canadian values, we have to be tougher than they are.

That's not going to change. And I'm never going to change my mind on the gun registry either, because my vision of a better world is one with as few guns as possible. And of course because too many women are being killed by them.

Federal figures show most domestic murders involve long guns - 62 per cent of the total, according to the most recent numbers available - and most victims are women.

"No gun law will prevent all tragedies. This one is imperfect. But there's evidence it's had an impact. The question is, do you want to make it easier or harder for people to get a gun?"

In fact, I don't think I'm going to change anything. Because that's what I take away from this tragedy.The only positive thing. And the only way I could face those names on that humble monument without bowing my head in shame.

By vowing that their legacy will not be forgotten. And that despite the great betrayal, we will get to that kinder gentler world.

The struggle WILL continue.

And I will never FORGET...

Go to Antonia Z's page: she actually shows statistics of gun related crimes on the decline since 1974 and that the gun registry certainly does help reduce gun crime:
Here's the link: http://thestar.blogs.com/broadsides/2009/12/the-fword.html

She cites bonafide stats from Stats Can no less.

I remembered in my own way.

I have also noticed that the Islamophobes are exploiting this tragedy to promote their racism and ignorance.

I illustrated on my page how stupid that was.

And CK, that was a great graphic from Antonia Z. I'm keeping that for the next time I see another stupid pro-gun argument. Ditto the "he was a mooooooozlem!" argument, which you very nicely demolished.

I am so sick of all these rollbacks, and that was the main thrust of my posting yesterday. As though women's lives were less important than gun owners' laissez-faire privileges. If THAT is not emotionalistic stupidity, as well as plain bad logic, I don't know what is.

Well, Simon, at least you admit you really want to get rid of all guns. That's a more honest position than you originally defended. Now, if you could come up with some reasons rather than emotional appeals, that'd be great.

CK, you should note that Antonia's argument is BS, as she admits -- although without admitting it. She notes that spousal homicides with long guns (the stat she pulls) were already on a downward trend. Which means that you have to analyze the data in order to tell what's causing the decline, not simply pick on one temporally correlated factor and declare causation.

hi CK...yes I saw it and I have no doubt that it does. And I'm still very angry that the wishes of police officers aren't been taken into account.
And as for the Islamophobes well they are just pathetic...

hi Bina...I too am tired of these rollbacks. As an article about the issue in the NYT said yesterday we are just becoming more like the Americans. We also seemed to have forgotten that resisting the American influence is the only way we can create our own culture.
For so long it was the key to our survival, and we will regret it...

hi ADHR... actually I don't want to get rid of all guns. I want fewer guns especially in our cities.
I am quite prepared to make special provisions for people who live in the country.
If you can figure out how to do that I'm willing to listen. But inconvenience is a pretty flimsy argument.
As for Antonia's stats, as logical and unemotional as you are, you can't call them B.S.
You can say that maybe the downward trend predicted them, but you can't be sure.
And until you can stats are stats. Sorry...

As a general statement I guess non of the women that died on that said day did not have any fathers or brothers just mothers and sisters as this fact was forgotten by the popular media. Im sick of this view that violence is a gendered issue.

You mean those statistics that show a drop since the 70's.

By similiar logic we need a knief license and registration system as they account for the same number of spousal homicides.

These laws came from emotional and where doomed to fail.

@Simon so I guess because I live in a city you would see fit to take my legally purchased and registered firearms away.

hi Paul...no I wouldn't want your gun to be taken away. Since you registered it I have no problem. I might dream of a world with no guns, but I don't want to impose anything on anyone.
Also I should point out that many men who were there, or were the friends or lovers of the dead women,were deeply affected by the tragedy. And at least a couple of them committed suicide.
And finally I wish that more people would understand the position of police officers, and the paramedics who are with them, when they are called to a scene of say domestic violence.
It is useful to know if there is a gun in the house, because trust me the last thing you need when you are trying to treat someone is a guy in his underpants walking around with a rifle. The way I see it everybody has to give a little to live in a safer society...

I am sure many fathers, brothers and lovers where greatly affected, but that does not change the fact that in every report I read this past weekend only cared about the mothers and sisters.

I have two daughters and I want them to have equal oportunities and the same rights as everyone else, but as a strong believer in people cannot be separate but equal the system is out of balance and not a lot of people seem to care.

We are at a very cross roads in this country where rigth now the programs that where put into place to equalize the education system so that more women went to university for example worked very well as a matter of fact today in Canada there are more women in university them men. The problem is that a generation of boys was marginalized. While the high school drop-out rates in Canada have continually declined the male drop-out rate has increased. I wonder when the issue becomes much more popular will the same effort to help girls be put forth for boys. The not so ironic part in this is my wife who is a teachers predicted this 10 years ago.

All of the firearms I own are “restricted” so the passage of bill C-391 does has little effect on me. I really had no choice, but to register. If I had the option I would partake in civil disobience, but I cannot.

Domestic violence incidents involve a firearm is a very small number. The media does loves a juicy story though.