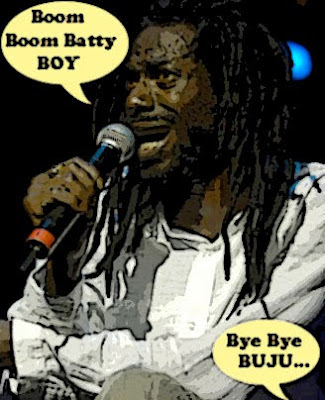 I don't usually enjoy seeing anyone brought down by Amerika's draconian drug laws. But I think I'll make an exception in the case of this ugly homophobe.

Jamaican reggae star Buju Banton is facing charges that he attempted along with others to buy a large quantity of cocaine from an undercover law enforcement officer.

Banton, 36, faces a charge of conspiracy to possess with intent to distribute more than five kilograms of cocaine, which carries a maximum 20-year prison sentence.

Because a thug who sings about how gay people should have acid poured on them...or should be shot in the head....

Dis is not a deal
Guy come near we
Then his skin must peel
Burn him up bad like an old tire wheel.

Banton was charged in connection with a 2004 incident in which he, as part of a group of about a dozen people, allegedly beat six men believed to be homosexuals, after forcing entry into a house in Kingston, near Banton's recording studio. One of the victims lost use of an eye in the attack. Charges against Banton were dismissed by the judge in the case in January 2006, for lack of evidence.

Deserves to do some REALLY hard time...in a jail full of gay thugs. And certainly doesn't deserve to win a Grammy.

Oh yeah, guess who his idiot supporters are blaming for the Buju bigot's arrest?

On Monday, in South Florida and Jamaica, callers burned up radio airwaves, calling the arrest a ``conspiracy'' to get him after his recent controversy that included protests by local gay-rights advocates over a Halloween concert in downtown Miami.

``What they are saying is that he got off that time and they are fixing him now.''

Right. The batty boys. Because in the U.S. gay people are so powerful they tell the police what to do, and can hypnotize bigots into wanting to buy several kilos of cocaine. And then lick the blow off a knife... while the cameras are rolling.

Which reminds me...since unfortunately I love reggae music...how dare this homophobic thug call himself a rasta?

They sing about love and revolution not crazy hate.

And they only do the holy herb...

May the real rastas like Peter and the Great Bob live on forever.

May the evil homophobes rot in jail.

hi anonymous...first of all he's not being prosecuted for his PERSONAL beliefs, but for being so stupid to buy a small mountain of cocaine from an undercover cop.
Secondly if a person has personal beliefs about killing gay people, or black people, or Jews, or whatever, he should keep them to himself. Not going around shouting them all over the place.
Killing people just for who they are is genocide, wrong, and EVIL.
Thirdly you can't seriously suggest that legalizing marijuana can be compared to calling for people to be murdered? Hmmmmmmmmmm...I thought so. Now be a reasonable person and go have a puff... ;)

The caption is incorrect, the song says Boom Bye, Bye that was oh so long ago when Buju was a teenage father. He's now 36years old.

He has in recent years made contact with the gay community, and believes in live and let live.

He has become a Rastafarian since then. People grow and change. Unless you grow up in a Jamaican family you have no idea.

I personally think that he has come on in strides considering his background. A christian country (more churhes per square mile than any where else in the world) previously ruled by Britain with the laws and ideas governing sexuality a left over from their rule.

We must all look deeper and be respectful to all.

This would be the same Buju Banton (a.k.a. Mark Anthony Myrie) who in 2004 -- only five years ago -- "was charged in connection with a 2004 incident in which he, as part of a group of about a dozen people, allegedly beat six men believed to be homosexuals, after forcing entry into a house in Kingston, near Banton's recording studio. One of the victims lost use of an eye in the attack." -- http://en.wikipedia.org/wiki/Buju_Banton

And the same fellow who just last year said, "This is a fight, and as I said in one of my songs, it will never be an end to the war between me and the faggots".

He can believe whatever he wants, but he's a vicious homophobe, and he should have been locked up a long time ago, when he *first* attacked and beat innocent gay people. And, if his assault had taken place anywhere *else* than a country that is notorious for being the most homophobic in the WORLD, he may well have been, rather than having the charges dropped for "lack of evidence".

"Bob" (who needs no second name) was the soundtrack to my life in university, first time in "the city", eventually coming out... in so many ways. And Bob was there. Played at celebrations, and at funerals, for gay and straight alike. Bob celebrates the *potential*... but also understands grief... Is it any wonder that SO MANY of my gay friends are Bob fans?

... heh... and then there's my ebullience when I come to Peter. Ahhh. I *love* Peter, but he took the 'Malcolm X' path to Bob's 'MLK Jr' stance. Peter was willing to get violent. *sigh* That's a whole 'nother discussion...

Artistically though, I would place Tosh and Marley as much 'partners' as were Lennon/McCartney. They're both exceedingly good on their own, but together... But, they grew apart and took different paths. Musically and personally. But they were Martin Luther King and Malcolm X, McCartney and Lennon, Che and Fidel when they combined as persons and as musicians -- they *CLICKED*. And you FELT it.

Damn. Both of them gone too soon.

And now assholes like "Buju Banton" are trying to pass themselves off as heirs to the mantle of Bob and Peter -- who basically *invented* reggae... I'm not gonna say he can't try to claim that title, that's not my place. But what I *will* say is that I believe that if Bob was here today, he'd slap Banton's face. Banton, and his crew, ain't "rasta". They're haters, which is not what Rastaman is all about.

hi anonymous...I do believe that people can change, we all make mistakes when we are young. I certainly have. :)
And I was hopeful Buju might change. Because he did sign a declaration only to go back on it and keep bad mouthing gays.
It's too bad because honestly I think some of his latest album is one of his best in a long time.
And I understand what you're saying about the culture of Jamaica and the influence of religion, but you know I believe in ONE LOVE, I don't believe in hating anyone for who they are.
So for me a little more love and reggae would go a long long way...

hi 'berto...that's a real neat comment even if it had to be...um...redacted. ;)
I know what you mean, while doing a little research I came across a YouTube that has Bob, Peter, and the Wailers performing together.
Bob looks like he always looked, but Peter looks like Che Guevara. Bob sang about peace and love, Peter sang about revolution. What a PERFECT combination.
BTW...did you know that Bob was half Scottish, and that gay people in California helped launch his career?
Lordy that gay agenda is AMAZING. I always liked Bob from the first time I heard him and now I know why... :)

Buju is an icon for the bad men.
He reformed, but only so far.

I don't care what happens to him,

if he gets away, he better grow up about gays and the hard drugs.

if some bad men bust him out, i would lol.

i respect him none the less.
it might be time for change tho, like a new heir to the throne.

hmmm...so, let's see how many fallacies are part of your article:

1. Boom Bye Bye was actually a song protesting a rape of an underage boy by an adult male. It's hilarious how reggae artists are always the first artists to be targeted by homosexual advocates, while artists like Eminem get off scot free....draw your own conclusions.

2 You claim to be this great liberal, but I laughed hard when you basically condemned Buju for the unfortunate death of a homosexual advocate in Jamaica, when THE CHARGES WERE DROPPED...I though it was innocent until proven gulity....or I guess in your case GUILTY WJILE PROVED INNOCENT.

3. Have you listened to the rest of his music? it's artistic credibility is as good as any reggae songs in the last 20 years.

I believe in the right for free speech, and I'm all for equal rights, so this post is not an attack on homosexual rights, but rather an attack on your article FULL of falsehoods. Get your facts straight, before coming across all self righteous.....