The Blackwater Boys and Why Bush Can't Win 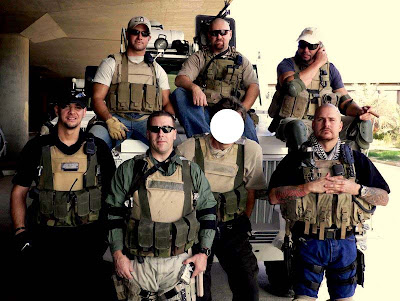 Meet the pitbulls from Blackwater....the world's most powerful mercenary army. They have their own armoured vehicles, helicopters, and gun ships. Their boss is a right-wing Republican who is planning to bring his private army into American cities. They've already been used in New Orleans.

And in Iraq they are out of control.

Everyone knows that if you come across a convoy guarded by American troops as long as you stay 150 metres back they won't start pumping bullets into your engine block.

But if the convoy is guarded by the Blackwater doggies you'd better take your foot right off the gas and let them disappear into the distance. Because they could flip out just like that...shoot you for nothing. And get away with it.

So I was really glad to see that the Iraqi government wants to give them the heave ho.

The question is will they go?

The U.S. depends on them in Iraq to protect everything from their own officials, to deliveries of food and toilet paper. They simply can't do without them.

If you want to get an idea of just how big they are check out this video...


Coming soon to an American city near you...

The good thing is that whatever happens now....Bush and his gang of war criminals and profiteers really can't win this one.

If they go along with the request of the Iraqi government ...and send the pitbulls back to the pound...they'll cripple their own occupation.

If they don't, and force the Iraqis to back down....they'll make Prime Minister Al Maliki look like an American stooge. Who can't be blamed for ANYTHING.

Oh boy....chapter 4005 and the insane tragedy that is the war in Iraq just keeps on getting better.

And who is making all the money?

And of course ...who's really running Iraq? Talk about some REALLY big questions.

Remind me to thank the Blackwater Boys...from a safe distance.

Can't wait to hear them bark...