Will The O'Toole Cons Ever Stop Lying? 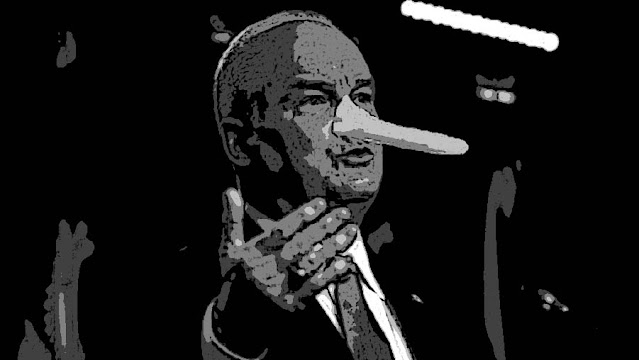 Sometimes these days I feel like I'm living on some kind of bizarro planet, where Erin O'Toole and his alien Cons stumble around with their shiny pokey noses, lying like thieves.

But almost nobody in our corrupted media calls them out.

So the truth must struggle to survive.

For as you can see the grubby O'Toole is now accusing Justin Trudeau of causing Canada's rising inflation rate.

While his sinister henchman Pierre Poilievre adds to the deathly chorus.

As only he can, 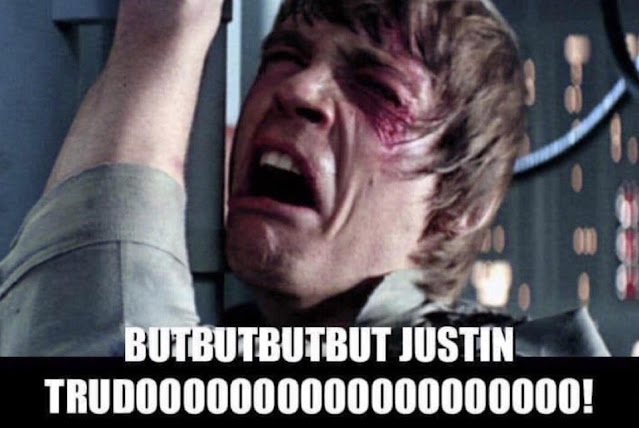 And demand that Justin Trudeau be arrested, and/or executed.

Even though, as Dale Smith points out, Trudeau has nothing to do with the supply chain problem.

The Cons are trying to claim that Trudeau is going to cause mass starvation, like their sordid buddies at Canada Proud are doing. 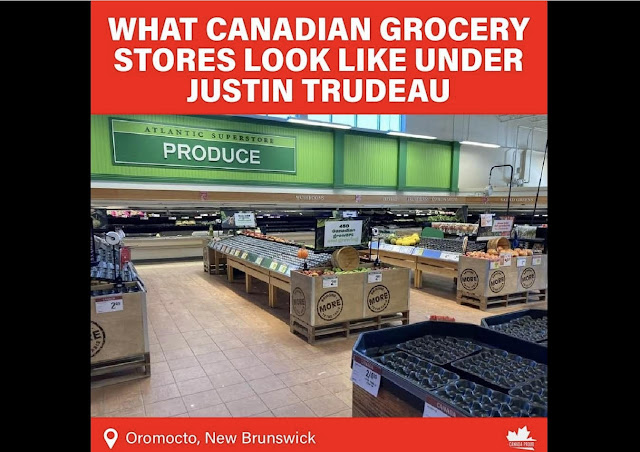 Even though that's just another Big Lie.

And as far as our inflation rate, in a difficult time we're doing GREAT... 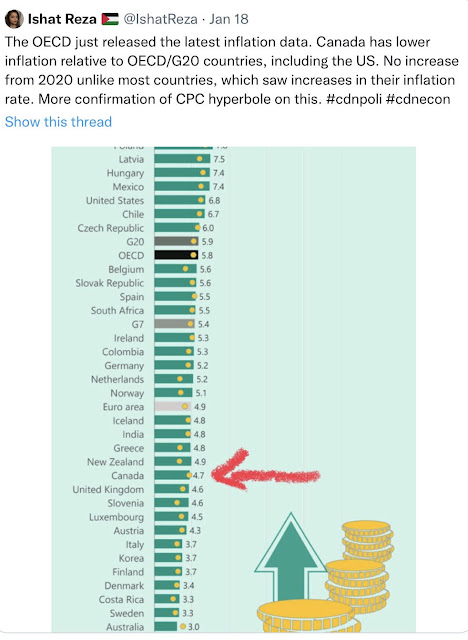 So it is all Con lies, from the scummiest and least Canadian party this country has ever known.

And the most monstrous leader since Stephen Harper. 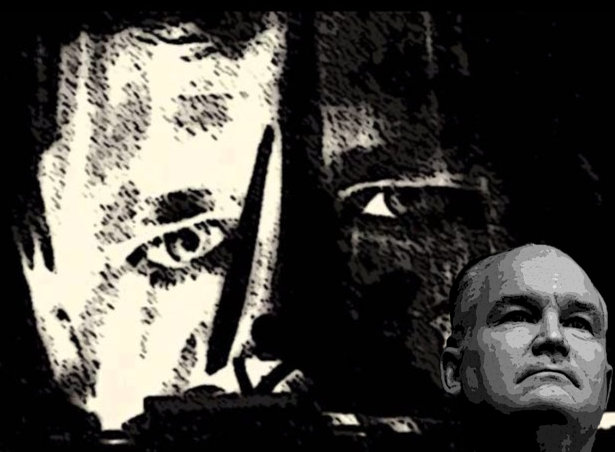 The idea is simple. Scare and demoralize the population. Try to undermine our health system, by among other things refusing to urge their supporters to get vaccinated.

Blame the consequences of their evil actions on Justin Trudeau, so he can be toppled, and the Cons can finally implement their cruel fascist agenda.

And turn this country into a nightmare... 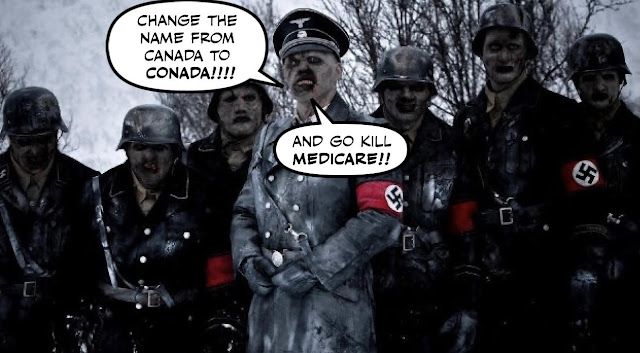 It's a truly evil plan, but I don't think it's going to work.

It's going to be really hard to accuse Trudeau of deliberately starving Canadians, when the O'Toole family eats so well, and so much... 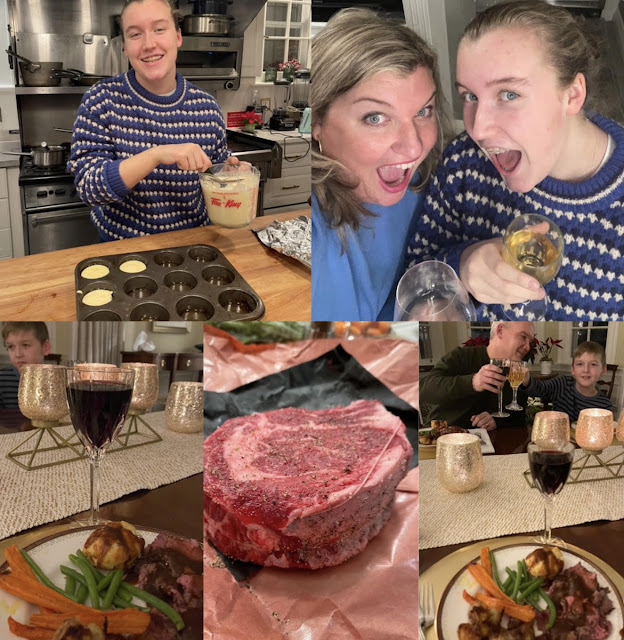 And the real problem is that O'Toole is is on the verge of collapse, and slowly losing his marbles.

He can FEEL his own monsters closing in on him... 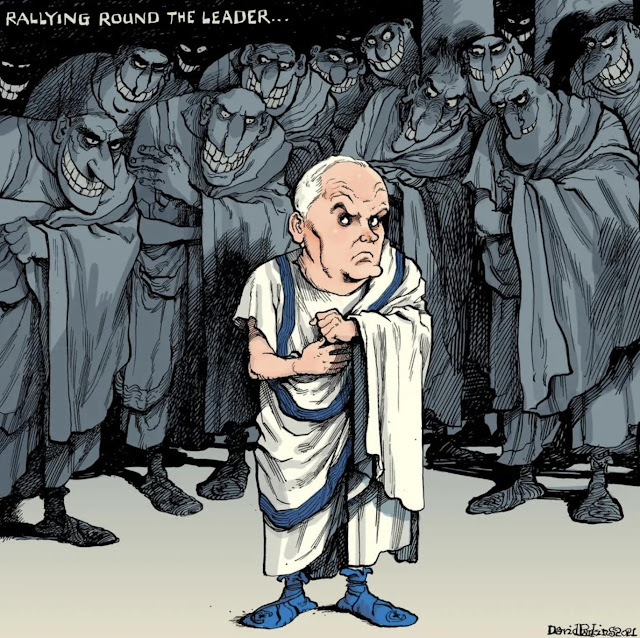 And now even the Con friendly Globe is stabbing him in the back, and saying the poor loser doesn't know what he's doing.

Above all, the official opposition serves as a “government-in-waiting,” and its leader as a ready replacement for the sitting prime minister. If the leader of the opposition is widely seen as a better candidate for the top job, that will cause more anxiety for a government than any number of Question Period zingers or sharply worded tweets.

And his biggest mistake has been playing cheap politics in the middle of a deadly pandemic.

His biggest misstep has been his messaging on the COVID-19 pandemic.
While Canadians are focused on getting through the latest wave, Mr. O’Toole last week used his podium to ask for understanding and accommodation for the roughly one-in-10 adults who are unvaccinated, and who are filling up hospital beds at a rate that far exceeds their proportion of the population.
When it comes to the greatest crisis to face the country in decades, the prime-minister-in-waiting has been either absent from the discussion, or making poor choices.
Even if that means that many more Canadians could die... 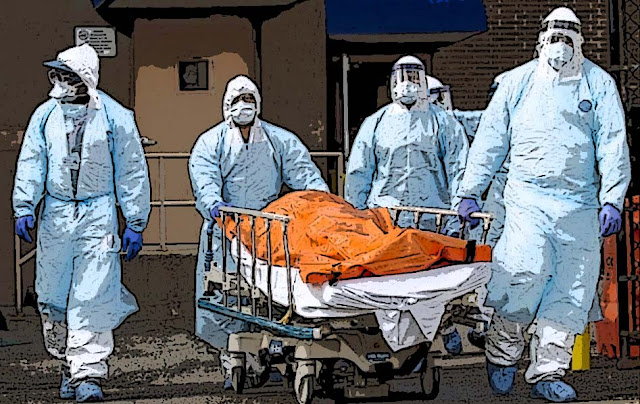 And the pandemic could go on FOREVER.
The dirty Con BASTARDS.
And the good news? After what they have done to us, they won't be governing this country for a long, long time.
So let O'Toole buy or borrow Doug Ford's tiny toy shovel, to try to dig himself out... 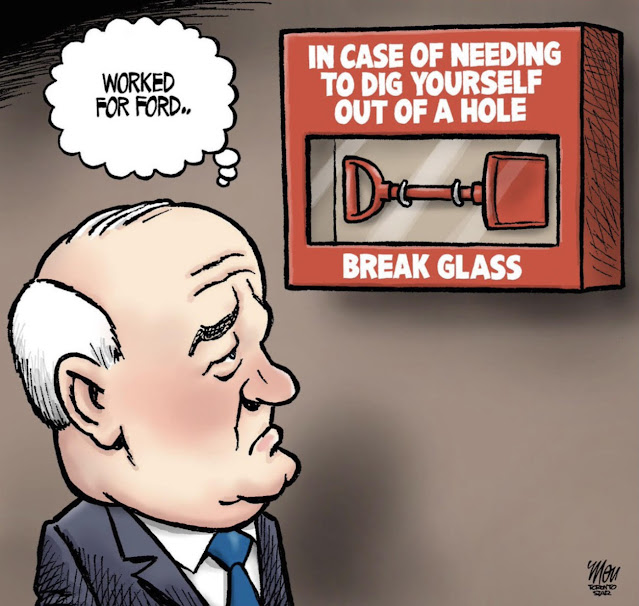 While we give thanks we have a real leader at a time like this.
And get ready to bury them all...
Posted by Simon at 7:15 PM

I wrote about that bizarre "three-way tie" Nanos poll that I'm skeptical of, and how if there are any dark clouds hanging over the Liberals right now, I really doubt they'll last. No, the answer of course is that cons will never stop lying. That's all they have. If anything they should be pissed off that except for maybe one or two questionable outlier polls, all the bullshit they're flinging about Justin-Flation etc. hasn't realistically affected Trudeau at all.

What I really want to know is why hasn't the media sounded any concern about that trucker convoy attempting its own mini-version of the January 6th riot on Parliament Hill? I know they're corrupt as sin, but are they really so stupid as to think "it can't happen here"? It's United We Roll 2.0 and of course they're going to be calling for Trudeau to be "executed for tyranny". Follow the money: how the fuck did they get 2/3 of a million dollars for this stunt?

I hope Trudeau puts those sumbitches under arrest. It would be his Just Watch Me moment. Well, another one, in addition to him standing up to the gravel-throwers during the campaign. Nanos is bloviating that people are sick of hearing Trudeau repeat the same message get vaccinated, we're providing PPE, etc., but if anything they're sick of the people who won't, and the reason he keeps saying this is because of the people who won't. There's only so much he can do, as long as selfish psychopaths are willing to resist and undermine the public health and sabotage supply chains for political gains. Yet it seems that for any wear and tear the Liberals have endured, any hits they might have taken, the cons are still found wanting and come up empty. May it stay that way for a long time to come.

Hi Jackie....I don't know where Nik Nanos got those numbers from, because they make absolutely no sense. Canadians are tired of hearing Justin Trudeau urging Canadians to do the right thing so we can beat down the pandemic once and for all? While ignoring Erin O'Toole's cuddling of the anti-vaxxers, the ones who could kill us or make the pandemic last forever? It's madness. I think a lot of Canadians are tired and stressed out, but surely they're not THAT dumb. And as for the Con trolls, they may be squealing like pigs, but so what? I enjoy every squeal they make. As for the anti-vaxxer convoy, Canadians will get a good luck at them when they arrive in Ottawa. And just one look at them should be enough to boost Trudeau's polls by at least five points. The Cons are desperate, they don't know what they are doing, and we are the ones who are going to run over them...

Hi anon@8:44 PM...I think that's more shot across the bow. I think Strahl who is a religious fanatic and an anti-vaxxer is letting everyone know that he has had it with O'Toole, and will support Poilievre if he runs. The far right-wing of the Cons is coagulating, and sooner than later they will blow the Harper Party apart. Hip Hip Hooray !!!

Simon said...
This comment has been removed by the author.
12:02 AM

Hi Jackie...I read your post on the latest Nanos poll:

And I thought it was right on.

Like Diane Marie, I believe that Nanos is just giving the Cons at CTV what they want. But those numbers won't hold up, and other polls will soon clearly show that the Liberals are comfortably on top.

It may be hard to remember that before he started dishing up polls for CTV, Nanos wasn't a bad pollster.

Hi Jackie....I just read your post again, and it was more than just right on, it was brilliant. And we will keep on truckin' all the way to our final victory....

It wouldn't surprise me if those fuckers tried to get the unvaxed truckers to purposely undermine the delivery of goods to grocery stores just so they can try to blame any shortages on JT. Can these sadistic bastards not do anything that maybe would help us out of this pandemic? And what exactly does Canada Proud have to be proud about? Being colossal assholes? I hope the RCMP and or CSIS are keeping a close eye on these lowlife scumbags and deal with them accordingly because they and their precious Cons have only obstructed our path out of this pandemic. They are Canada's shame and let me remind them that they are a tiny minority of our population that is undermining the huge majority that are doing their part to get us through this. So let me make it simpler for these simpletons. You are nothing but domestic terrorists in the same vein as the proud boys and oath keepers that pollutes the US. You will never win, ever! Your only paths forward are to either become peaceful, productive citizens, or look forward to a lengthy stay at(as my daddy used to call) the crowbar hotel.
As for the next Stornoway eviction victim, Errin, I'd like to offer his children an idea to help daddy tell the truth for once as they must be ashamed of his inability to tell the truth. Do a parody of iconic Canadian Jim Carrey's "Liar Liar" with daddy in the starring role. Now that would be funny.
https://www.youtube.com/watch?v=8kmAQy4mu60
JD

I failed to mention the obvious results of the Con's(specifically PP) and Canada "proud's" fear mongering about truckers. People are panic buying again instead of just grabbing what they need and next thing you know, the shelves are bare. Great work there Penis Pete and your proud domestic terrorist buddies. Speaking of terrorists, did JT not declare the proud boys a terrorist group? Maybe that's why they and the whole cabal of far right douche bags are so infatuated with Justin. And of course Pierre. What a piece of work that is. I'd bet money that when he emerged from the womb the doctor looked up and slapped both his parents.
JD

Hi JD....I have been checking out some of those "Freedumb Truckers" and some of them are some of the worst toxic Trudeau haters I have ever seen. So I haven't the slightest doubt that their real goal is to destabilize the government, and I wouldn't be surprised if that protest turn violent. Like you, I hope that the RCMP and CSIS are keeping a watchful eye on those ugly Cons because they are capable of anything. I also hope that those truckers, who make up only about 10% of the truckers on the road, will be investigated for domestic terrorism during a pandemic, and punished accordingly. Many Canadians are fighting for their lives in hospitals across the country, and we need to put them first, and not be distracted by Con trash...