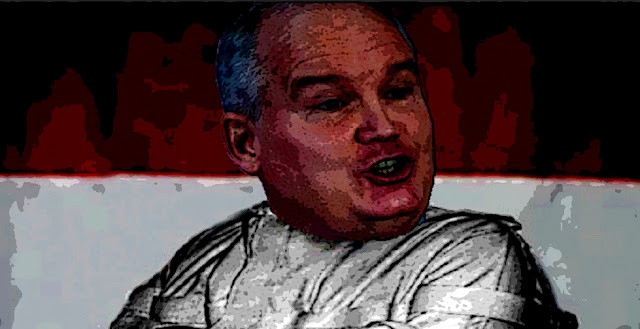 A few days ago, I wrote that I believed that Erin O'Toole was on the verge of a nervous breakdown.

And now I'm even more convinced that he's ready for the rubber room.

For having to channel Mad Max Bernier to try to get back some of his anti-vaxx supporters must be painful enough.

A real exercise in humiliation.

But this must surely be the final blow.

Quebec Premier François Legault said Tuesday the province would be imposing a health tax on Quebecers who refuse to get their first dose of a COVID-19 vaccine in the coming weeks.

Legault did not say when the payment would take effect or how much it would cost, but he did say he wanted it to be significant enough to act as an incentive to get vaccinated — more than $50 or $100, he added.

For O'Toole and Legault once had a good thing going. 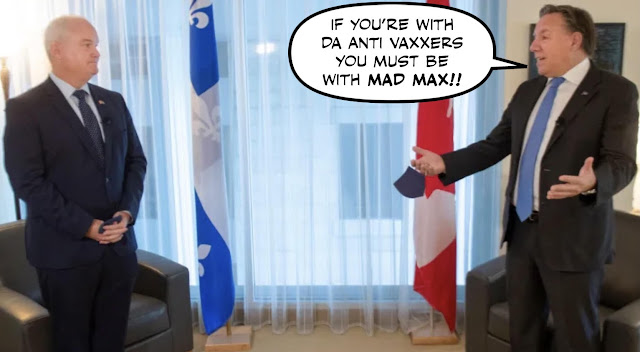 And then there's the pounding he's getting from some in the media.

Like Gary Mason who accuses O'Toole of being a shameless hypocrite.

It’s doubtful Mr. O’Toole actually believes what he is saying – he just has little choice but to say it. He has his job to worry about and that job is leading a fractious caucus that includes a strident wing of freedom fighters who believe Canadians should not have their rights and liberties “trampled on” by government, regardless of circumstance.

Even if that causes a crisis in our health care system.

You see, if Mr. O’Toole upsets his freedom fighters, he risks creating a cleavage in his caucus that would imperil his position. He’s also aware that a faction of the conservative base went running into the arms of Maxime Bernier and the People’s Party of Canada in the last election largely over the issue of vaccine mandates. So the Conservative Leader goes along, defending a defenceless policy.

Mason accuses O'Toole of being a man totally out of touch with the wishes of most Canadians.

For the most part, Canadians are a tolerant bunch, but they have lost all patience for vaccine holdouts and the incomprehensibility of their position. The unvaccinated refuse to put a “poison” in their bodies and yet, if they arrive in an ICU on death’s door, they happily allow doctors to pump any number of unknown drugs into their bodies to keep them alive.
Nor do they seem to care that what is now being called a “pandemic of the unvaccinated” is taking a brutal toll on front-line health care workers who are in desperate need of a break from all this.
Erin O’Toole is on the wrong side of this issue. And the people of this country may not forget it.
And when I took a look at O'Toole's face at the end of the day, I think he now realizes what a terrible mistake he has made... 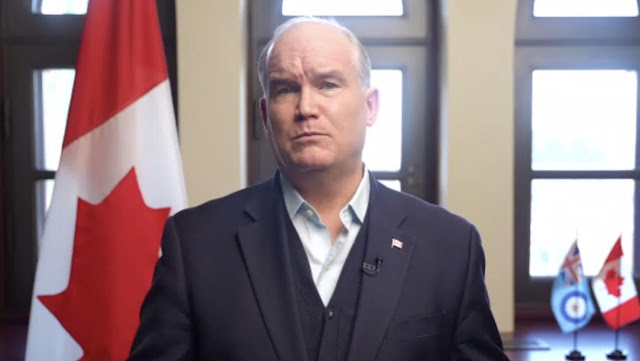 One that  could cost him and his Cons EVERYTHING.
And if you still think that O'Toole isn't going crazy please check out this video...

Steven Guilbeault wants to phase out Canadian energy in the next 18 MONTHS. How disconnected can Justin Trudeau's activist minister be? Say no to Guilbeault! pic.twitter.com/lmyCehwspc

And I think you'll agree it's almost time to draw the curtain on O'Toole's shabby political career.
Get the rubber room ready, the loser is on his way.
And give thanks that this guy is the leader of our country... 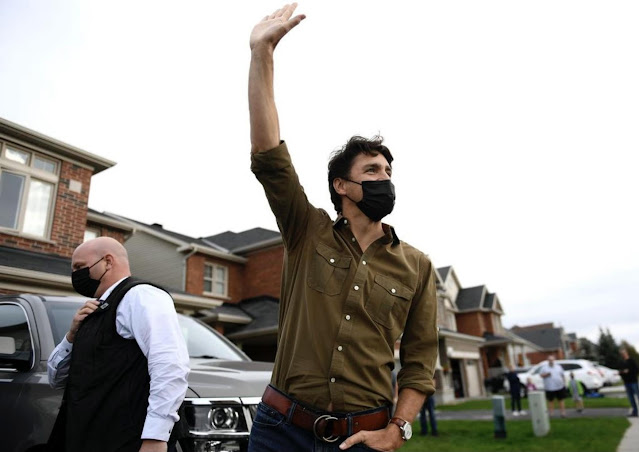 After seeing error's little pitch ( was it on at 3AM ?) I went right out and ordered a Popiel Pocket Fisherman.

I think you're right, Simon. The tool's losing his mind. He's on a six lane highway to nowhere. He's in the right lane, the left lane, the center lane, then he veers over into the far right lane and back again the next day. He never uses his signals when changing lanes so it's like watching a tennis set on crack. Warning! May cause whiplash. The only way he'll win back the odious wing of the party is to go full on Trump 24/7 which will cost him more than what he'll gain. It's a CONundrum exclusive to the Cons and their various sects to which he'll never satisfy all. I think he should resign and let the Cons release the Kraken. Who, in this case, is Penile Poilievre. I'm quivering with excitement at the thought.
JD

If so, good riddance to that compulsive liar. They're going to have to really scrape the bottom of the barrel to find someone else who can satisfy the QMoron base. I've heard rumblings about Paddy the Pervert Brown entering the as-yet-hypothetical leadership or leader-shit race, but one of the reasons he proved so unpalatable to the wingnuts in control of the party was because he dared to support Trudeau's "job-killing carbon tax." Then Dougie took over at the provincial level and the rest is history.

Wonder if he'll try to fail upwards if he loses in June? A real wrestling match in the zoo it'd be, between the pigeon (and his lobster Svengali) and a hangry gorilla? Add the shrew Marjorie Trailer Rempel for good measure and we've got ourselves a royal rumble that'd make Vince McMahon proud!

(BTW: Simon, is there a glitch in the backend code? All the comments here are turning up bold.)

"Thank you @PierrePoilievre. It's nice to see a politician with some courage. You should have run for the Conservative leadership.... and maybe you could bring @MaximeBernier back on board. He has some spine too."

hi Jackie...I will of course be campaigning for Pierre Poilievre to replace O'Toole in the hopeful expectation that he will finish off the Cons. Doug Ford is is dying to run for the Con leadership, but unfortunately for him the state of his premiership won't allow him to do that. I can see Patrick Brown thinking he might stand chance with such mediocre competition. But he's pretty mediocre himself, and as you point out, his carbon tax heresy should doom him right from the start. It should be an entertaining contest, and the more bloody the better.
As for my man Poilievre getting his advice from Lobster Man Peterson, I can't decide whether to encourage that or not. I did a little research on Peterson recently, and he is clearly either out of his mind, or back on heavy drugs again. So I'll probably tell Skippy to follow him religiously...

P.S. As for the comments turning up bold, I think I know why that happened. But I think I'll leave them like they are, since you and the other commenters are more often than not, the real stars of this blog...

I would be remiss by not commenting on my elation at Francois Legault's vaxtax and all I can say is it's a brilliant idea, as does Bob Hepburn who takes a good swipe at the tool and Slug Ford. https://www.guelphmercury.com/news-story/10553050-bob-hepburn-why-are-doug-ford-and-erin-o-toole-still-coddling-anti-vaxxers-/
On top of that, Cons across the country are losing their shit over this and that's always a crowd pleaser here. Not surprisingly, Ford said he wouldn't be going down that road (just the road to the cottage I guess). Kenney's a firm no as I'm sure are the rest to avoid pissing off their bases. Then they have the nerve to say Legault's playing politics.
Last I heard vax appointments were flying off the shelves in la belle province so that's great. Kudos to Legault for displaying the biggest set of balls among premiers in a long, long time. "Vive la Québec vaccinée!"
https://www.youtube.com/watch?v=xPlqLHcphyw
JD

The Tool would have us take a bite out of his latest big whopper but his followers are already fully bloated and who else has a penchant for garbage. Even big oil has moved on from pump and dump to the cigarette model of amassing huge profits as demand and supply is ramped down in unison.
The Guilbeault interview is an informative read; unlike the Tool’s attack ad that claims he will leave us freezing in the dark within 18 months.
https://thenarwhal.ca/federal-environment-minister-steven-guilbeault/

A few excerpts:
We don’t have five years to consult every time we want to introduce a new measure. I told you earlier that my timeline is two years, so in the next two years, more stringent methane regulations, zero emission vehicle standards, net-zero grid by 2035, cap on oil and gas, and obviously phasing out fossil fuel [subsidies]....
We’ve started investing in nature-based solutions to adapt to climate change…. Traditionally in Canada, infrastructure dollars were for concrete and pavement and now we’re using this to build parks that will help us alleviate spring floods. ….We’re looking at different elements of the adaptation, of a national adaptation strategy, infrastructure, human health, resiliency.
As you know, natural resource extraction or usage is largely a provincial jurisdiction. But the Supreme Court in the carbon pricing case clearly stated that when it comes to pollution, and climate change pollution, the federal government has a role to play. It’s not a magic wand that we can wave any way we want. We have to use this power with clairvoyance, but that’s why we’re going after pollution..
the reality is that what we’re doing here in Canada, we’re seeing similar things happening in the U.S. and in Europe and clearly some countries are ahead of us …. where will the demand be if all the major economies of the world are reducing their demand for fossil fuels? …. provinces that are highly dependent on these resources need to start thinking and looking at what the world will look like in 10, 15, 20 years from now. To think that the past will guarantee what will happen in the future is not necessarily the most responsible thing..
…. need to make sure that people are properly trained, people are properly ready for the jobs that will be in vogue in five years, in 10 years, in 15 years.

Hi JD....Thank you for the link to Bob Hepburn's story. I have been disgusted by all the members of the Con media wringing their hands about the "ethics" of punishing those who would kill the elderly and the vulnerable. What a bunch of dilettantes, the damage those scummy Cons have done to this country is beyond belief. The way I see it we're in a war, and in a war you do what is necessary to win, anything less is rank cowardice and even treason. If we don't crack down on those anti-vaxxer crazies, thousands more will die and the pandemic will go on forever....

Hi JD….I thought that O’Toole’s deranged attack on Guilbeault is the worst attack I have ever seen him deliver. As I understand it he had found out that Legault was planning a vaxx tax so he couldn’t keep dogwhistling his Covidiot supporters without alienating Legault. who O’Toole was hoping would make him more popular in Quebec. But whatever the situation is, such a Big Lie should be enough to have the media demanding that he resign. The fact that they haven’t tells us how low they and the Cons have fallen. And we must not let them get away with it…

Mainstream is calling him out for distorting the green plan. He is saying Trudeau will phase out fossil fuels in 18 months. And the mob is raging.

LOL. Any possibility ol' Airshow is up for another kick at the can?

You broke it, Pete. This defective party is your albatross. The Jacob Marley of Canadian Politics. Or should I say MMMarley, mmmkay.

In other news: Le Fool finally took a position and turned his back on Empereur François. Liberté, egalité, stupidité. Guess his contract with Quebec ain't worth the toilet paper it's printed on.

Daylight savings hasn't expired yet, but I think we can move his political doomsday clock forward quite a bit. Au revoir, Commandant Latrine.