Erin O'Toole, the Con media, and the Big Lie 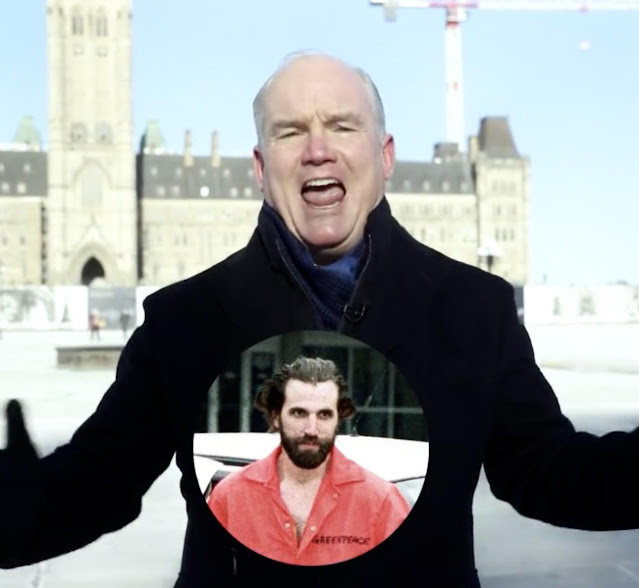 In my last post, I included the latest video from Erin O'Toole, which was a deranged attack on Steven Guilbeault, the Minister of Environment and Climate Change.

I ran it to show why I thought O'Toole is losing his marbles, and is just about ready for the rubber room.

But I didn't have time to expose the Big Lie in that video, so I thought I would run it again.

Steven Guilbeault wants to phase out Canadian energy in the next 18 MONTHS. How disconnected can Justin Trudeau's activist minister be? Say no to Guilbeault! pic.twitter.com/lmyCehwspc

So I can make sure that everybody understands that the Big Lie is that the Trudeau government isn't planning to phase out Canadian energy in the next 18 months, it's planning to start phasing out SUBSIDIES to energy companies.

And O'Toole knew that, but he lied then, and he is still lying

A look at @erinotoole Instagram account shows a) this misleading information is still up and b) comments are running more or less as one would expect.

This step by the CPC leader is certainly calculated, not an accident.
People can form their own judgments about that. pic.twitter.com/59DVdwaTXh

But the media also knew that, so why was the only one to challenge that lie the Con media "star" Althia Raj?

Who had this to say in the Toronto Star:

Call me naïve but after nearly 20 years of covering politics some things still surprise me — namely the comfort and ease with which some politicians will distort the truth.

This week, that astonishment came from a video Conservative Leader Erin O’Toole posted on his social media account, in which he attacks Environment and Climate Change Minister Steven Guilbeault for wanting to phase out Canadian energy in the next 18 months. (For the record, he doesn’t. He wants to phase out fossil fuel subsidies.)

Perhaps this is part of his effort to earn the support of party members ahead of his leadership review. Many of the hundreds of comments in response to the video are positive and egg him on.

But O’Toole, who already struggles with an authenticity problem, will have an even more difficult time courting non-partisans with behaviour like this.

Which is all fine and good.

But while I congratulate Raj for being the only one in the Con media to denounce O'Toole, why did it take her so long to realize that he is a serial liar?

When he has lied like a thief from the moment he became Con leader,

Why have so many of her colleagues in the Con media looked the other way? And while we're at it, why did so many Progressive Bloggers also give O'Toole a pass?

I realize that the Disaffected Lib who styles himself as an energy "expert" wouldn't complain about O'Toole's lies... 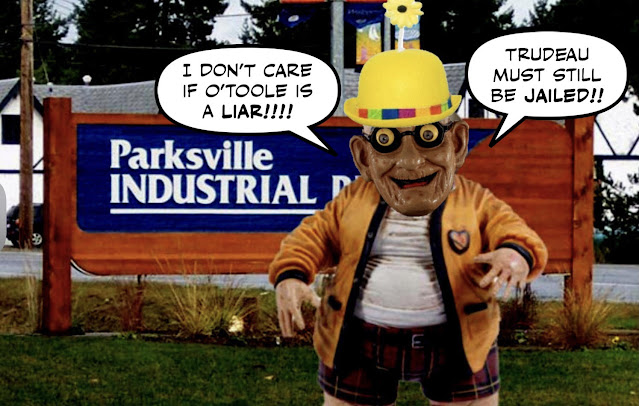 Not when his feverish hatred of Trudeau clouds his judgement. And he's also just about ready for the rubber room.

But what about the decent bloggers? Are they OK with allowing O'Toole to normalize lying and corrupt our democracy?

Oh well, I have a lot of questions, but no answers.

All I know is that I have denounced that Con liar in every way I could... 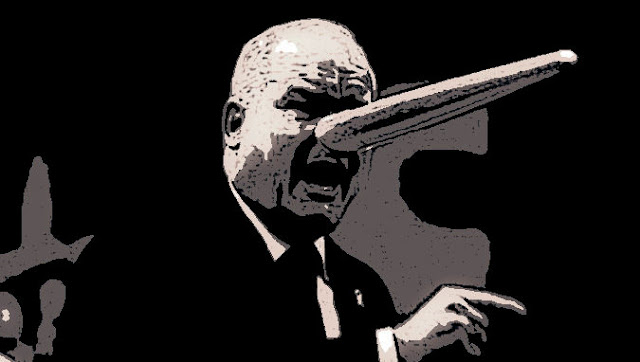 So my conscience is clear.

And I intend to keep doing what I have always done.

Until the scummy liar O'Toole and his filthy un-Canadian Cons are finally deposited in the garbage can of history.

Because the media is owned and operated by Cons who see the Big Lie as a "balance of opinion" that benefits subscription sales and ratings. Remember what the CBS exec said about Trump: He might be bad for the country but he's been great for the network. They don't care about substantively informing the public. They care about horse race polls, "conflict" and "strategy." And covering whatever angle they feel works best to turf the PM they despise.

Raj is one to talk. Sure, she proved the axiom of a broken clock being right at least once a day, but what about all the other times cons have lied with help from her and her colleagues? All she ever does on that tired At Issue panel is nod along with Coyne. Why is she even there?

That Substack grifter must be really out in loony land if she honestly thinks the CBC is "woke". They've been nothing but a mouthpiece for Con lies and fake scandals for the entire duration thus far of Trudeau's tenure, under the guise of "holding the government to account". AKA biting the hand that feeds.

The upside is that Tool's numbers keep plummeting despite their abdication of duty. The downside is that he came perilously close to the top job because the media shoved his and the party's overall Trumpishness down the memory hole the moment the writ dropped, and went into overdrive painting him as a "moderate". Whether he survives the leadership tussle or gets replaced, the Big Lie media will just do the same thing over again.

One need not necessarily be a MAGA hatter to acknowledge that the fake news lying media truly is the enemy of the people. It's possible to lie through omission too and that's what they do every single day by continuing to treat the cons as a valid "government in waiting" instead of the white supremacist reality deniers and austerity fanatics they are.

Imagine if you will, if The Right Honorable Prime Minister Justin Trudeau were to spew out the daily stream of projectile diarrhea that the tool does, I wonder if the Con media would ignore 99% of it as they do with the tool? Of course they wouldn't. It's remarkable how much effort they put into digging up anything negative against JT and as they usually can't, they then resort to creating fake scandals, all the while allowing the Cons to just make shit up without challenge. It's an epic failure and an epic disservice to Canadians who deserve to know the truth. On the bright side and try as they might, we still elected JT as PM and they are left looking like fools. Scorned and with any semblance of integrity shattered. The MSM is dead to me. So that leaves us to our own devices and the few journalists with integrity to dig at the truth and keep informing Canadians of what the Cons and their media is intentionally doing to us.
You've been great keeping up with their shenanigans, Simon. Thanks to you and Jackie and others, there's not a lot of Con antics that go unchecked. Keep up the fight and the facts. Going forward, I can only imagine what tall tales await us from the tool's little world of make believe. Which makes me wonder, how many lies does one have to tell before they go to hell? I think in Erin's case, he need not worry about fossil fuels where he's going. I'm picturing his tombstone, "Here lies Erin O'toole" and chuckle at the irony. I'm picturing his wake, in his little casket, wearing his little runners. "He died how he lived" they'll say, with him just lying there in front of everyone. Of course I kid and God forbid if Erin croaked. He doesn't need my help as he's already killed his career and killed any hope of ever having a majority of Canadians believe anything that comes out of his mouth.
https://www.youtube.com/watch?v=oU7rqB9E_0M
JD

Hi Jackie….The media in this country has shamed itself with its blatant bias. And Althia Raj’s claim that Erin O’Toole has let us all down is absolutely absurd. O’Toole has let this country down but suggesting that it’s a first time offence is outrageous. And as you point out, her appearance on the At Issues panel is also a farce. I don’t know what she’s doing on that panel, except providing a non-white face, since her Con bias is only too obvious, and the only way to save At Issues, or try to repair the CBC’s credibility, is to kill it. It’s a throwback to the Mansbridge era, and doesn’t belong on the new National. The good news is that the Con media tried to portray O’Toole as a moderate, and they can’t do that any longer…

Hi JD….Right on. I can’t imagine Justin Trudeau ever acting like the scumbag O’Toole. And if he did the Con media would be in a frenzy demanding that he resign, or be lynched. Luckily, Despite the vile way he has been treated, and the numerous threats he has had to endure, Trudeau has always managed to remain classy, and a cut above any of the Cons. I hate to imagine what our grubby political scene would look like without him. On the other hand, I can imagine what the Cons would look like without O’Toole, and they would look the same or worse. As long as the Cons have as many religious extremists, and right-wing kooks, they will never change, and I can’t see how they will ever get rid of them. The old Reform Party is in their DNA, and no serious Canadian could ever trust the Cons if they love this country…