How Much More Can The Loser Erin O'Toole Be Humiliated? 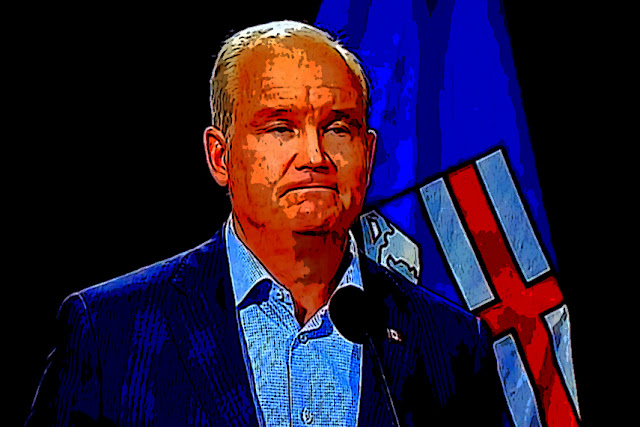 I must admit I had no idea Erin O'Toole could endure so much humiliation, and like the Eveready bunny still keep going.

I honestly thought that when Harper's former flak Andrew MacDougall, accused him of "flapping around like a coked-out, second-string Fox News host," O'Toole would finally get the message, and resign.

Before his own ugly Cons chew him up, and spit him out.

But he didn't resign. So now he has been humiliated. Again !!!! 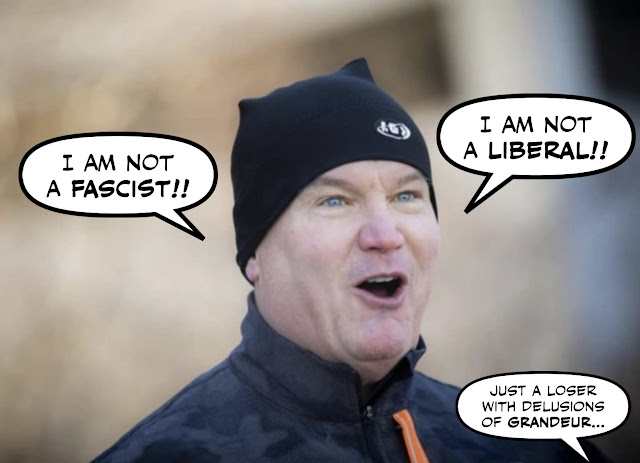 For now the crusty old Con columnist Lorne "Grunter" Gunter is coming after him, wondering why he's such a glutton for punishment.

In the 1982 movie  An Officer and a Gentleman , a cruel drill sergeant played by Louis Gossett Jr. (who won an Oscar for his role as Emil Foley) tries every sadistic tactic to convince officer cadet Zack Mayo (played by Richard Gere) to drop out of naval aviation training.

During one especially exhausting, painful punishment, Foley asks Mayo why he refused to wash out voluntarily, to which Gere’s character famously replies, “I got nowhere else to go! … I got nothin’ else.”

I think that same desperation is the only thing keeping Erin O’Toole in the leader’s job of the Conservative Party of Canada.

And even calling O'Toole a "Liberal"

O’Toole is the invisible man. He makes few public pronouncements. Kicks up very little stink. And never seems to go for Trudeau’s vulnerabilities.

When he does criticize the Liberals, it’s basically for not being very good at implementing Liberal policies. His spiel seems to be, “Vote for me. I’d be a more efficient Liberal than the Liberals.”

Which of course is the ultimate insult for a Con like O'Toole, especially since that's what Mad Max Bernier calls him all the time.

Especially since Mad Max is appearing at a big anti-vaxx rally in Toronto this weekend. 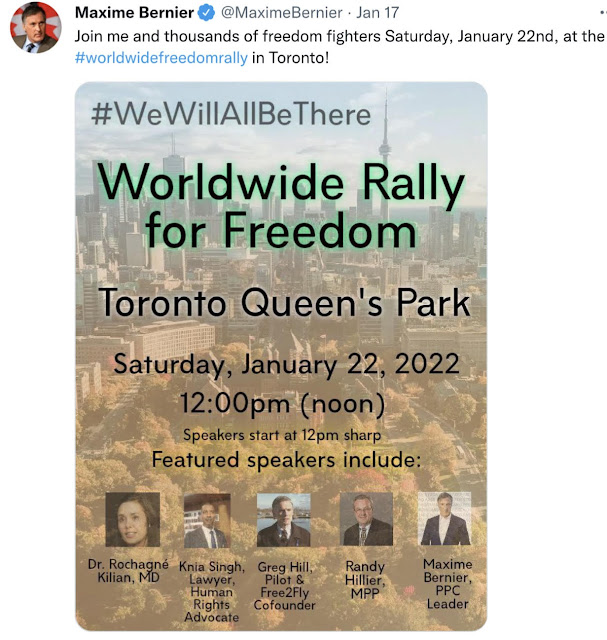 And so are his supporters who have been wailing and gnashing their teeth like I've never seen before.

Especially with polls like this new one from Abacus, showing the Cons tanking more rapidly than any of the other parties. 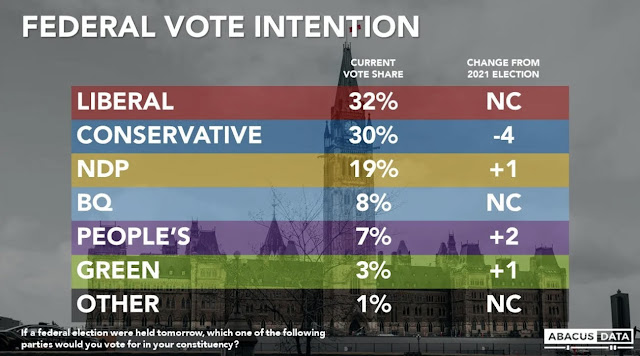 Or this poll that shows him growing more and more unpopular: 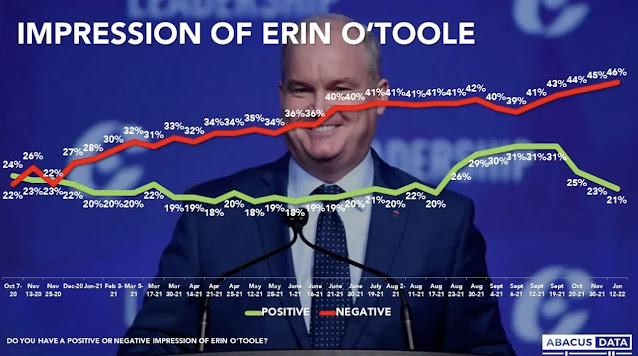 And if the Cons were hoping that Jagmeet Singh would help them split the vote, well they may have to park that hope, since Singh is now busy dealing with this embarrassing scandal.

The NDP says it is working with the ethics commissioner and intends to file a formal disclosure report on a $1,895 rocking chair given to NDP Leader Jagmeet Singh's wife in exchange for posting about the item on her Instagram account.

On Sunday, Singh published an image on his Instagram page of himself sitting in the same chair cuddling his newborn daughter, with the furniture company tagged in the image.

For it certainly is embarrassing. Singh sitting like a King in a $1,900 rocking chair, and promoting those who gave him and his wife the chair on his Instagram page. Power to the people !!

But then even if he doesn't resign, for such blatant grift, Singh will never be Prime Minister.

And the fact remains that O'Toole may be running like the Eveready Bunny, but as Campbell Clark writes, he's going nowhere. 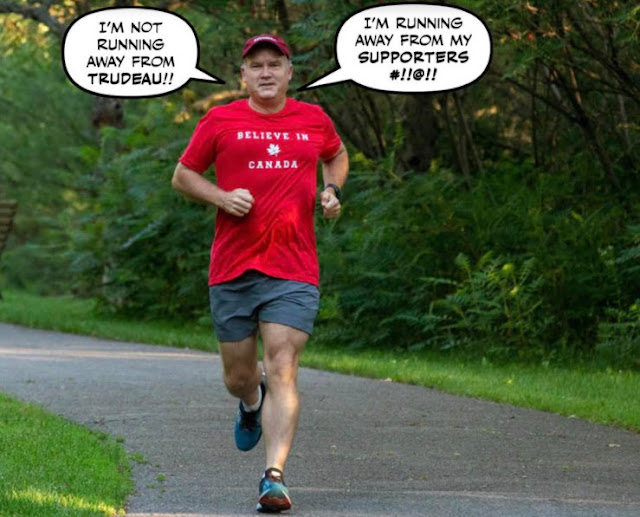 Erin O’Toole must feel like he is on a treadmill. He’s under so much pressure from his own partisans to mix it up, to punch harder at Justin Trudeau, to stand up for conservative principles, and to make political gains.

Get out there, the Conservative Party and conservative pundits urge. And then when he does, he doesn’t really go anywhere.

Which may disappoint the grubby Cons and their shameless stooges in the Con media, but shouldn't really surprise any decent Canadians.

O'Toole got off to a bad start, which just got worse, when he started smearing Justin Trudeau 24/7 every day of the year.

And despite all his ghastly flip flops, or all the attempts to change his image, it was always obvious to me where he was going....

Yup, the Cons have hit rock bottom, and Erin O'Toole is on his way to the garbage can outhouse of history.

Where he so rightfully belongs.

And as I myself have predicted, his future grows dimmer with every passing hour...

He might have been an officer but he is no gentleman. Curse of Politics was interesting last night. Jenni said there's no actual talk of a leadership race as of now, but the tool has lost the "soft support" he once had in caucus (as evidenced by Garnett the Not-Genius taking some time out from fixing his wedgie to demand a return of the GHINA committee).

Some on social have said Potato Pete has designs on being the perpetual candidate, but the panel all agreed that Skippy is the "prohibitive favourite." That would appear to check out, seeing as the so-cons have been getting very animated lately online. Paddy the Pervert Brown, meanwhile, may be in fact looking towards the Ontario PCs again if Dougie gets shoveled out, but right now it's all just talk. They're stuck with O'Toole, in a downed Sea King in the swamp.

What all this shows is that the cons themselves have no place else to go. The tool is a loser, but their benches are bare. That's why the usual "pundits," and drive-by cons in comment sections such as the ones here, are feverishly writing fanfic about the Liberals and trying to manufacture Chrétien/Martin II as a male-gaze catfight fantasy. They want Freeland and Joly to tear at each other like Krystle and Alexis Carrington fighting in a pool.

Fact is the Liberals have never been so united, while nobody wants to lead the cons, and nobody can lead the cons. They're stuck in a muck of their own making. With sincerest apologies to Chuck Berry, they got no particular place to go!

Hi Jackie…The Cons are really in a frenzy, I have rarely had to delete so many Con comments. I’m not sure whether they are being paid by the Canada Proud gang, but by the way most of them are squealing like pigs, I wouldn’t be surprised. They are clearly in a lot of pain, and I couldn’t be enjoying it more. As you point out, the source of that pain is the lack of any serious candidates to replace Poilievre. He seems to be the favourite of the right-wing religious fanatics, and I only hope that he throws his hat or his head into the ring soon, for he really would be the end of the line for the Cons…

The Tool and his puppet masters have concluded the party needs a coat of Liberal lite paint to woo voters into their tent. The US owned Republi-con Post seem to think that even a pretend hint of liberalism is heresy and all that's required is a media savvy leader capable of herding the flock into the big blue tent. Its only coincidental that the sensationalism is also good for the media business. Both sides are desperate. The Tool has painted himself into a corner and needs liberal lite voters for gains as well as to replace the Max defectors. The Post needs revenue generating political turmoil to keep their sponsors happy and loans afloat under a cloud of rising interest rates. Cons don't do win win unless its Mafioso style so someone has to lose.

Hi RT….it’s ironic that Erin O’Toole still seems to believe that the National Post is his best friend and strongest ally. When in fact the Post is now run by a cabal of right-wing extremists intent on pleasing their American masters, and will not help him attract the more moderate voters he needs to compete with the Trudeau Liberals. Most politicians would recognize that, but by now it’s also quite clear that the scummy O’Toole is as dumb as they come…

And so it goes in the land of Cons. One day your beloved propaganda unit, the Sun is fluffing, buffing and worshiping you and the next, you're a useless tool. Lorne "the gunt" Gunter, pauses his daily grunts at JT to put a fork in something that has long ago been cooked. I expect the other sun propagandists will soon follow. I think it's great for them to break up their usual, mundane daily existence of flinging shit at JT and attack one of their own. Remember, diversity is our strength. However, it wont be long before they're back at it while slathering lipstick on the next "chosen one". And what a deeply troubling, shallow gene pool of talent they have to pick from. A veritable who's who of Harper lackeys and representatives of Canada's most repugnant groups. They'll need someone who isn't afraid to jump into the cesspool to try and get all their turds in a row, so to speak. Good luck with that.
JD

Hi JD....Yes, it must be painful for O'Toole to have even the trashy Con rag go after him. But of course the Sun is only doing it because it's the Bible of the Con base, and it fears that O'Toole is leading them all to disaster. It will be interesting seeing who the Sun believes would make a better leader, because choosing one won't be easy. And they must surely know that if Justin Trudeau gets re-elected, their days will also be numbered. So as you say, good luck with that...

Shameless plug but I did a write-up on that Nanos poll that's got everyone's hair on fire.

Watch and see the same useless pundits churn out more sabre-rattling bullshit based on this poll, predicting Trudeau is about to quit or be forced out.

Remember "vaccine failure" about this same time last year, and how it caused a dip and the same reaction that aged like milk?

Rinse, repeat. This too shall pass.