How Erin O'Toole Screwed Himself and the Covid Cons 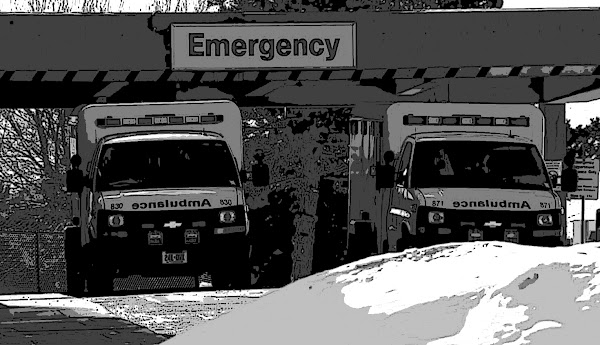 In the age of Omicron this is a recurring nightmare, that is becoming more real by the day.

A code red warning that there are no ambulances available to transport sick people to hospital.

My other nightmare is that because cases are exploding, there is no room in the hospitals to receive them.

And then there is this nightmare. 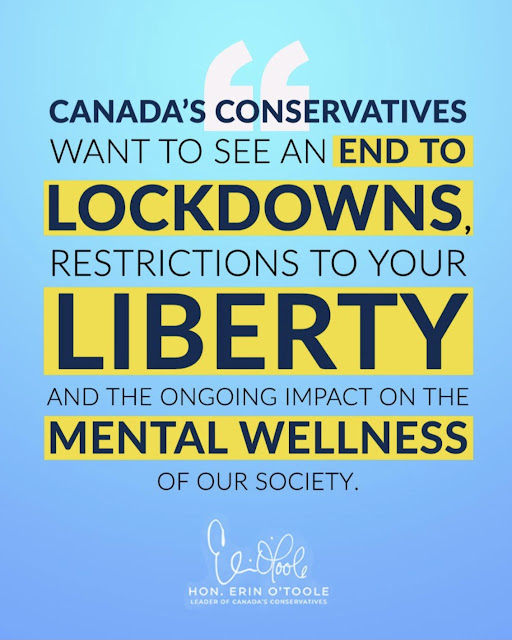 Making a virtue out of the "liberty" not to get vaccinated just like Bernier does all the time.

In a desperate attempt to try to get back some of the anti-vaxx supporters that Mad Max has been stealing from him.

With both Con kooks now fighting each other.

And both shamelessly pandering to the unvaccinated, even though they are disproportionately responsible for swamping our hospitals... 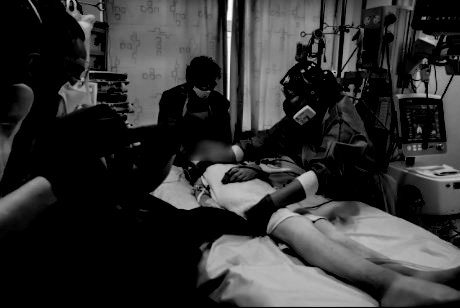 When as Katherine Smart, the President of the Canadian Medical Association writes, the real question should be what should we do about those who would endanger the lives of others?

Hundreds of thousands of Canadians are not getting the care they need because of the strain, according to CMA President Dr. Katherine Smart.

“As a society, we have made a decision to allocate resources disproportionately to this group of Canadians at the expense of other Canadians, including children who are now not able to attend school. And I think we’re sort of acting like it’s not a choice, but it is a choice,” she told the Big Story Podcast.

“We’re also seeing Canadians lose their lives because they’re not able to access the health care they need because of the system overwhelmed with COVID.”

“We have this small minority — about five to 10 per cent of the population — that are leading us to where we are right now, and I think we need to get serious about what we’re going to do about that,” Smart added.

And I truly believe that most Canadians would agree with her, for they are are sick and tired of those who would play cheap Con games in the middle of a surging pandemic.

They want to see the anti-vaxxer murder clowns pay for their war on the elderly and the vulnerable. Like Quebec is planning on doing.

And they want to see the increasingly desperate O'Toole sent packing... 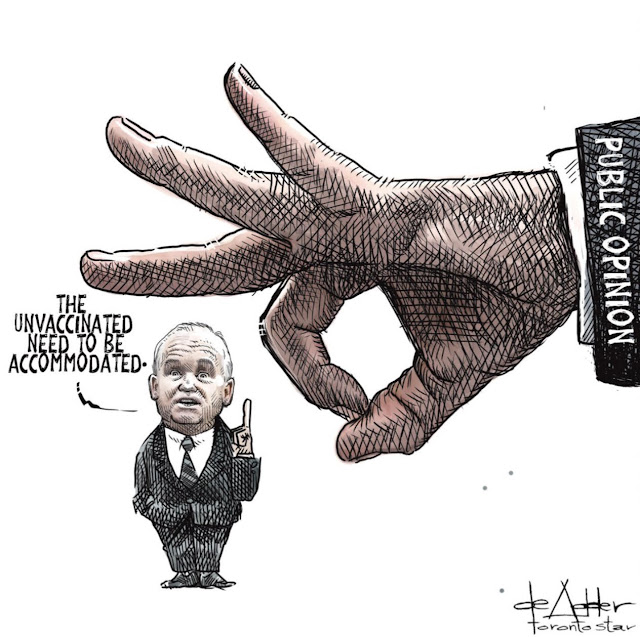 For as the Star editorial board says, enough is enough.  Reason hasn’t worked. Statistics haven’t worked. Pleading, begging, scolding and shaming haven’t worked.
Those refusing to be vaccinated against COVID-19 are doing great harm to the majority of responsible citizens, to Canada’s health-care system, to the overburdened men and women who work in it.
The responsible majority of citizens are fed up to their locked-down ears with the tail wagging the dog.

And O'Toole just doesn't get it.

O’Toole should understand that to give comfort to the unvaccinated is to support the ongoing necessity of lockdowns.

And he never will.

He sold out to the anti-vaxxers and other kooky right-wing extremists a long time ago. 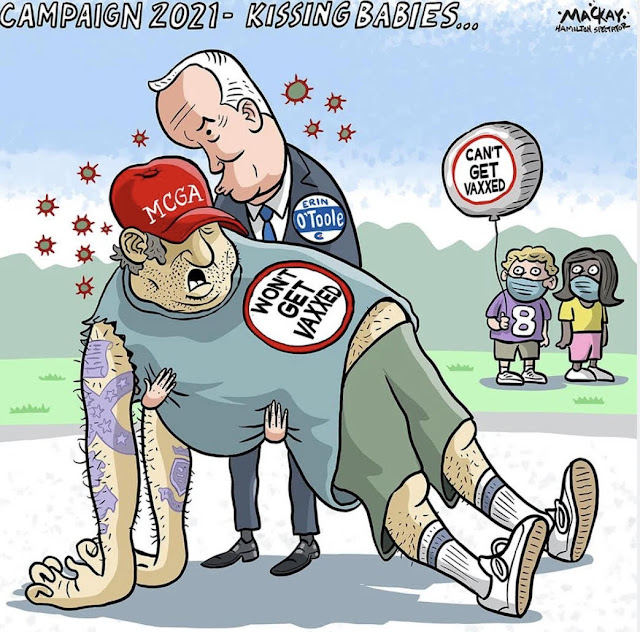 He's painted himself into a corner... 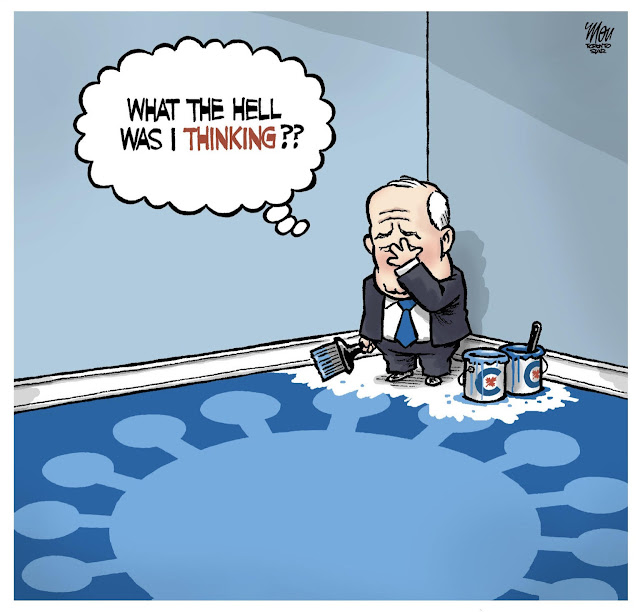 He can't please some of his supporters without angering the angry others.

And with a little bit of luck, when the smoke clears.

There won't be much left of him and the Covid Cons....

The one thing I hope COVID puts on life support is conservatism, period. Unfortunately, the stupidity variant has combined with the cynical greed variant, and mutated into a stubborn plague that's proving more difficult to get rid of than previously thought. At some point, truth in advertising laws ought to be brought in that bar covidiot cons from calling themselves "pro-life," when they're quite willing to kill others in order to own the Libs.

The one silver lining seems to be that its spread appears to be limited, on account of the stupidity variant producing the absolute worst salesmen. O'Fool's video from today, pushing bullshit about Guilbeault's climate portfolio, makes him look like an infomercial pitchman. A hyperactive Billy Mays wannabe, displaying the effects of snorting his own OxiClean. Now, I've lost hope that my side of 49 won't send the Orange Juiceman back to the Reverse Mortgage White House in two years, but at least Canada right now isn't buying whatever gimmick the Tool Man is desperately trying to sell.

When all is said and done, the cons at every level of government deserve to face a class-action lawsuit for wrongful death. If there are any trial attorneys with a conscience in the world, at least they could put their own commercial sales pitch expertise to good use.

What is the Tool man thinking? He rambles on about blaming Trudeau for lock downs caused by a very aggressive virus yet fails to call out a small sub set of anti vaxxers who are disproportionally burdening the health care system. Even socialist leaning Quebec recognizes the damage the anti vaxxers are doing to health care and are planning some good old capitalistic penalties to compensate. Months ago he had the option of promoting vaccinations and pushing the Liberals to do more on several fronts but instead he used the true blue brush to paint his party into a corner and wreck significant damage along the way. The election loss combined with the flip flop on carbon tax and assault weapons propelled him to double loser status, he now has the distinction of being a triple loser. Unfortunately each level he attains is marked by a significant amount of suffering and loss of life.

Hi Jackie...I think O'Toole will be able to claim the credit for putting the Cons on life support, for he has chewed up that party like a big fat piranha. First he fails to urge his anti-vaxxer supporters to get vaccinated, then he tried channeling Mad Max Bernier to try to get some of his supporters back. And when François Legault decided to punish the anti-vaxxers it must have been the final blow. He had all but kissed Legault's fat ass to get him to support him. But that's all over now. O'Toole is on his own and I wouldn't be surprised if he resigns before he's fired. Pity....

Hi RT....As I wrote a few days ago, I think O'Toole is having a slow motion nervous breakdown. He has done everything wrong, and the anti-vaxxers and other kooky Cons he so feverishly recruited have come back to bite him. He really has painted himself into a corner, and I don't thing anything him and his grubby Canada Proud gang do now can save him. He is as you say a triple loser, and I can hardly wait to see him humiliated by his own party. It's been a real horror show, but I'm pretty sure it will have a happy ending. Bye Bye O'Toole, Bye Bye Cons....

Legault has the right idea - no vax, pay tax. Whether it'll stand up to a constitutional challenge is a matter for the courts to decide. But solutions that don't address the wilfully unvaxxed are not real solutions, as even O'Toole was forced to admit when he agreed with a mandate for the military. Anything that doesn't cause people to get vaxxed is just an indefinite tax on responsible people that allows the irresponsible to ride for free. No free rides, people should be paying to be unvaxxed.

It is certainly ironic. The Tool, a self proclaimed bastion of free enterprise gives the anti vaxxers a free ride on the publicly funded medical system while Quebec quasi socialists decide to put a price on stupidity. In a free enterprise system most insurance premiums work this way; act like an idiot pay like an idiot. Somehow the Tools vision of capitalism seems to contain an element of entitlement. What a surprise!!

Hi anon@81:4 AM….I realize there may be constitutional challenges but all I care about is that just the threat of a “vaxx tax” has Quebecers rushing to get vaccinated. Too much is at stake to get hung up with small legalities. We’re in a medical emergency, we have to protect patients, healthcare workers, and our hospitals. So anything that does that is fine with me…

Hi RT….As you know, I have always considered O’Toole a grifter who would do anything for HIMSELF. He was always been a selfish person, except that now that selfishness is potentially fatal. I have to repeat it over and over again to get it to sink in. Erin O’Toole had a choice to make, and he chose to cuddle up to the anti-vaxxers rather than help us beat back Covid. A lot of things are forgivable but that one isn’t….