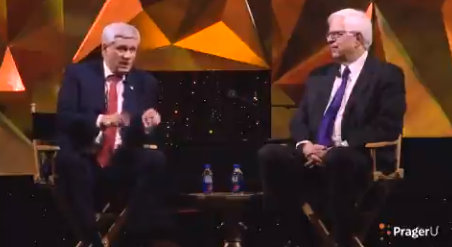 A few days ago I wrote a post about Stephen Harper's appearance on an American right-wing talk show.

Where he claimed that the only reason he lost the 2015 election was because the media was united against him.

And like others I wondered whether he had returned to replace the hapless Andrew Scheer as interim leader.

But now I believe that we can all relax, because it doesn't look like Harper will be going anywhere... 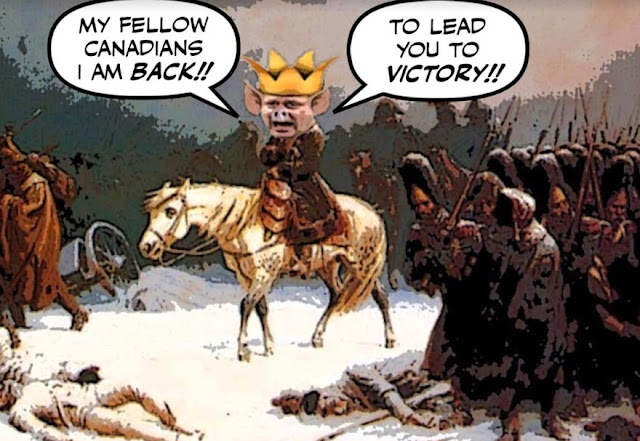 His interview was a bust, it hardly got a mention in the MSM. And after his humiliating defeat at the hands of Justin Trudeau, the leader he claimed was "Just Not Ready,"  it seems that not many Cons are prepared to follow him anywhere.

And as Andrew Cohen writes, he cannot be rehabilitated.

No one says former Canadian prime ministers must gently fade away, once the way of American presidents. What we do expect, though, is a measure of honesty, generosity and self-reflection.

Harper offers none of that. He is elder but no statesman; he has second thoughts without sobriety. He cannot help himself.

He seems to be losing his grip on reality.

Harper denies that the authoritarian Viktor Orbán of Hungary is anti-Semitic because “he is the greatest friend of Israel in Europe,” a relationship which provides cover for a coded campaign of prejudice. He slams Germany’s Angela Merkel for “the enormous damage to her country for letting in a million refugees. She will never live that down.”


He praises his “great friend” Benjamin Netanyahu, who is on trial for corruption.

Once he was Jesus Harper.... 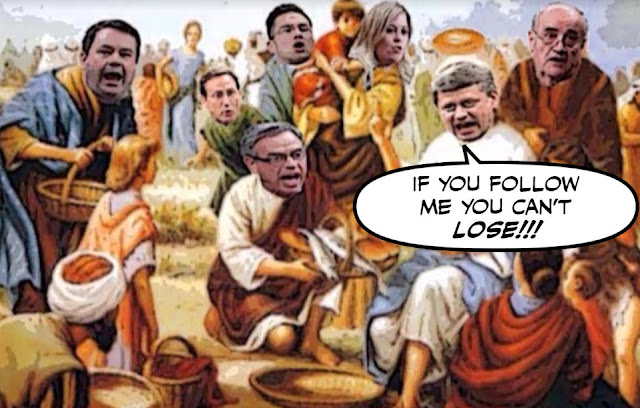 Now he's just another Con loser, consorting with fascists, and trying to turn speeches into money.

As Sandy Garossino says, it's really amazing to see how his power is dissolving.

Behold Stephen Harper, the powerhouse victor of three back-to-back elections, all won with the self-same news outlets and journalists. Here’s a man who dominated this country for almost a decade, strode the world stage with Barack Obama, Angela Merkel and other historic figures, now reduced to fabricating bitter recriminations against the media on a second-rate YouTube channel.

How far he has fallen, how diminished his legacy... 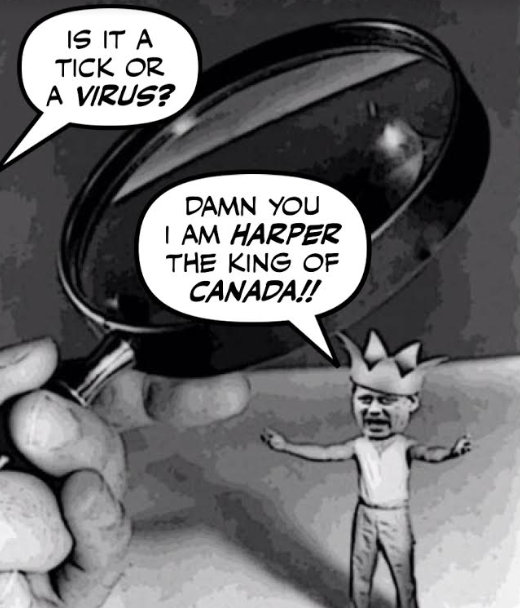 And does he even realize that people are laughing at him?

From the wings, Stephen Harper may still control his chastened party, but Canadians have moved on.

Power may be enigmatic and mercurial, but you know it's finally over when the laughter is following you out the door.

The irony is that the Con media who Harper blames for his loss, were the ones who built him up as a Great Leader, and kept him in power until he was way past due.

So the Cons rotted like a fish from the head down.

And now Stephen Harper, the loser, can never go home... 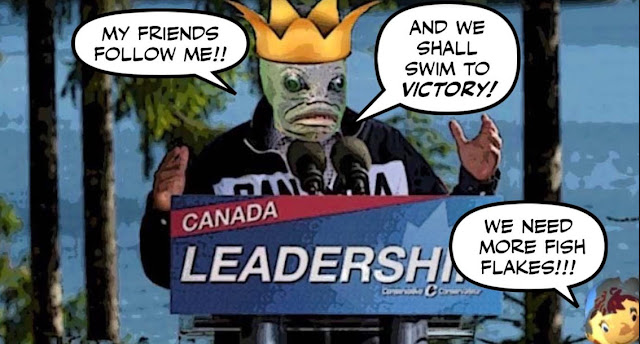 LOL I'm sure it's his... legacy that shrinks every time one of his minions puts his foot in his mouth and Trudeau goes up another notch in the polls. 😉 But I digress. Now all that remains on the agenda is to hopefully send Judas Pete packing in the next election and put a full-circle end to the sad horror story of the Reformacons once and for all.

But enough about Adolf Harper and the fash trash of the IDU. Simon I'm curious, what do you think Justin Trudeau will do many years from now in his post political/prime ministerial career? As he is still quite young, and even if he were to win another majority and serve out one more four year term, he would still only be fifty-five years old after ten years as PM. I know he told Rosie a couple years back that he misses the classroom and wants to go back to being an elementary school teacher, but I can honestly see him succeeding Guterres as UN SecGen eventually. He's done an incredible job of saving Canada from Harper's wreckage and Trump's insanity, and I think he has it in him to go save the world.

May he never earn the Brian Mulroney dollars. BTW BM THE PM just got paid 13 mill a year by a Cannibis company, and all the time he fought agaist it, he could have been paid, thats a public servant.

harper's shitty book reveals a desperate attempt to deflect anger away from the ruinous neoliberal policies that have destroyed so many lives, towards scapegoating of immigrants.

People like harper and trump and right-wing con-men in general can't deny that living standards have decline. But they can't blame their own policies. (Throughout his idiotic book harper praises every single thing he did as being "fact-based" and "arrived at after rational calculation of impacts and benefits" and blah, blah, blah.) So they blame immigration.

They're sickening and the murderousness of their policies are now plain for all to see.

It was the medias fault eh former dishonorable Dear Leader? Any in particular Stephen? The ones who had front page ads on election day telling people not to vote Liberal or the ones who trashed JT on a daily basis? What a deluded little man you've become Stevie. Unwilling to take responsibility for your thorough defeat in 2015. But, that's what Cons do. Never take responsibility for their failings, of which there are so many that on any given day they'd be apologizing for them all day long. They fear it will make them look weak when in reality, it would make them look human. If you cant learn from your mistakes then you are doomed to repeat them over and over and over again. The last five years of Con behaviour is an excellent example of that. To err is human, to Cons? Too stupid to know it.
JD

Looks like the same people who are skirting the laws of media ownership in the National Disgrace have taken over the star. No Mainstream voice for the people, tell your children, stop reading the MSM news its all fake.

'The press hates us' is just another tool in the Con's bag of deceptive emotional tricks. When in power or running for election its a winning strategy... any detrimental press is written of as anti-Con bias and positive press implies they must be tremendous as even the enemy has to admit it. The strategy has a best before date but turns rancid when a has-been leader pulls it out of his bag of tricks 5 years after the fact. As with all strategies there is a time and place... Harper either missed the application part in Con boot camp or was just reminiscing about the glory days.

OT: Speaking of Harper's legacy. Schmearmonger being a disingenuous concern troll about Mandarin Manson's Helter Skelter. Yellow pest Rebel Alliance stormtrooper says what? Why doesn't the Yank wanker go down to the White House lawn himself and bring some muscle milk to his fellow boogaloo boys or sell them some insurance. "But Aladdin, waaaa" oh shut up, racist prick. It's MAGA Night in Amerika: Make Andy Go Away.

How is he allowed to gallivant around spreading his dangerous ideology. He should be in quarantine. Does he feel responsible for this crisis with his constant push for deregulation and privatization.

Hi Jackie....sorry to have taken so long to get back to you and the others. I have just been to busy and any free time I have I just want to sleep zzzzzzzzz. As for Justin Trudeau's future, I too can see him as the Secretary General of the UN. In fact, I suspect that's why he is so interested in getting Canada a place on the Security Council. And considering the state of the world I think it's going to need a Trudeau to put it back together....

Hi Steve ....The Bloater is getting paid by a weed company? I must find out the name to I don't inadvertently infhale and inflate his portfolio. 😉

Hi Thwap....I agree with you. I think the reason Harper was always seeking to divide Canadians with one wedge issue after another is to attempt to conceal his brutish neoliberal policies. With Trump it's even more obvious, and by acting like a fascist, he is blowing it for all the others Cons, Johnson, Bolsonaro, Harper etc etc. So although what's happening now is horrifying, I like to,believe that it's the beginning of something good, or at least better than what we have now....

Hi JD....When I heard Great Failed Leader claim that the Con media was all against him, and had plotted to overthrow him I was stunned. I remember that the Con media blew him like a trumpet, and allowed him to debase our parliament and act like a political thug for almost a decade, and he must be deranged to think otherwise. Or maybe just desperate....

Hi Steve.....I'm not exactly sure where the new owners of the Star are intending to take it, but being owned by the same company that holds so much of Postmedia's debt isn't reassuring. We'll just have to wait and see, and hope they can rescue the Star financially without turning it into another National Post....

Hi RT...Trump always manages to rile up his base by claiming the media is united against him. And Harper may be able to fool right wing talk show hosts in the U.S, but he'll never fool most Canadians. They remember how Harper throttled the media, and how the media still loved him, and endorsed him year after year after year. But it only makes him look small or smaller, and I can't complain about that...

HI Jackie....Yes, I thought that Schmearmonger was particularly hypocritical considering all he has done to stir up racism to pander to his rabid bigot base. The Cons must be desperate when the Ugly American is forced to sound like a liberal. Poor Andy they are going to have to put a straw hat on him and take him away in a wheelbarrow.....

Hi anon...l have no idea why Harper still believes in his right-wing fantasy world. It should be clear by now that his brand of economics is horribly dated. But then I always thought he was more suited to be a small town bank manager than a prime minister, so I'm not surprised that he sounds so mall and so desperate....l