The Military Blows The Whistle On A Sickening Scandal 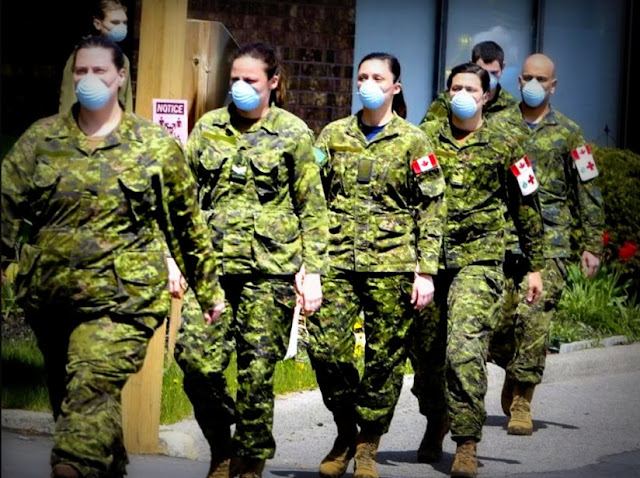 When I first saw Canadian soldiers arriving at long term care homes in Ontario and Quebec I must admit I was shocked.

I didn't think they had the training or the equipment to be able to do much good.

But boy was I wrong. 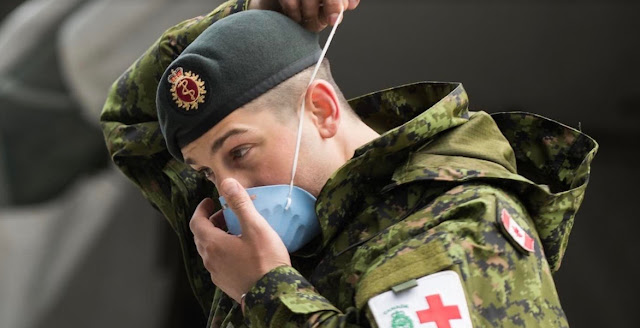 Not only are they doing a great job, they have exposed a hidden horror.

The Canadian military has drawn the curtain back on horrific allegations of elder abuse in five Ontario long-term care homes, with precise, graphic reports of residents being bullied, drugged, improperly fed and in some cases left for hours and days in soiled bedding.

Within the military's shocking catalogue of abuse, neglect and cruelty is an accusation that delinquent care led to the death of a resident.

A horror that should shame us all.

It was in Orchard Villa that troops observed the choking death of one senior, who was lying down while being fed.

In the same centre, according to the report, troops had to send a senior to hospital after the resident fractured a hip and was not cared for by staff. Other patients were "left in beds soiled, in diapers, rather than being ambulated to the toilets."

For a country that cannot take proper care of its oldest and most vulnerable citizens isn't much of a country... 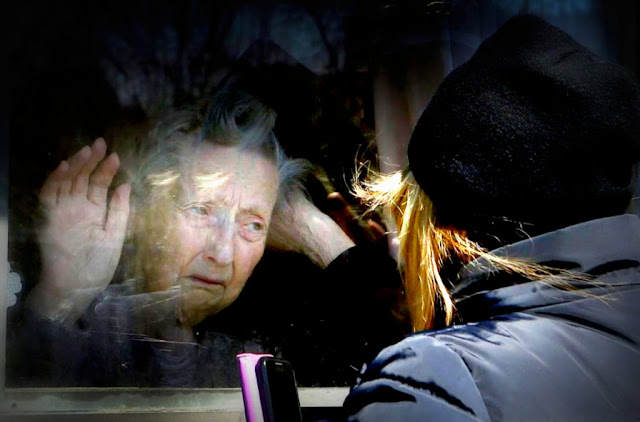 But at least now the horror has been exposed thanks to the decency and bravery of our soldiers, 39 of whom have been infected by the invisible enemy that threatens us all.

And at least now Doug Ford and his ugly Cons will have to pay for this monstrous decision. 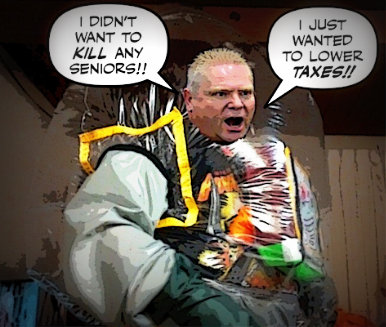 People with loved ones in long-term care homes in Ontario might assume those facilities are thoroughly inspected every year to ensure they are in compliance with safety standards and regulations as the Ontario Ministry of Long-Term Care says they should be.

But CBC News has learned that last year, only nine out of 626 homes in Ontario actually received so-called resident quality inspections (RQIs).

There must be a full public inquiry, and I can only hope that long term care centers will finally be brought under direct government control, so its fragile residents can live out their lives in safety and dignity.

It has been, and still is a real horror show.

But somebody finally saw their distress signal... 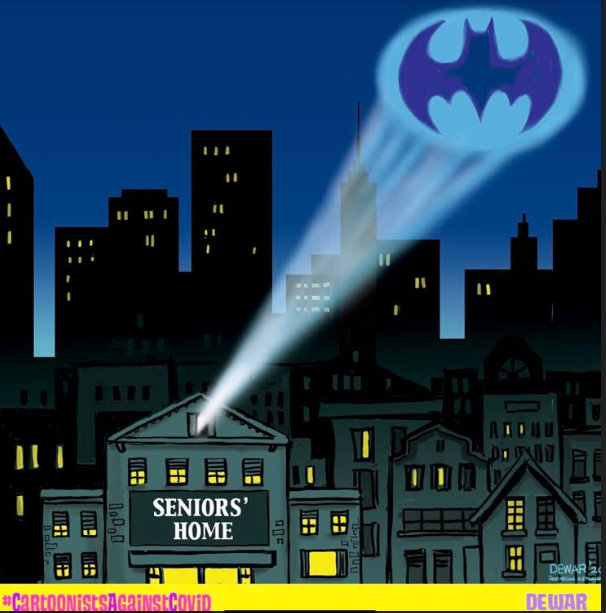 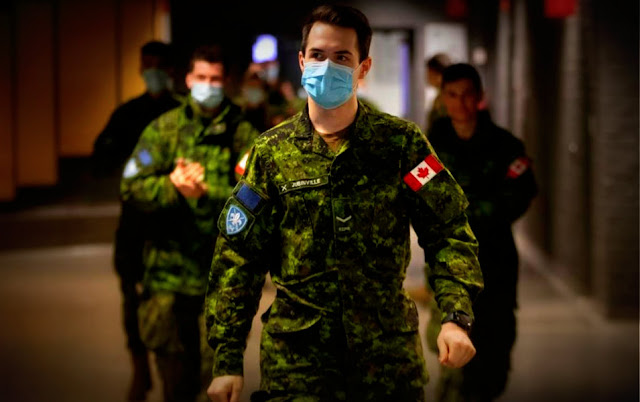 Keep up the good work. May your wounded recover quickly.

Know that all decent Canadians are proud of you.

And grateful for the truth as horrible as it may be...

I really don't agree with a lot of Nora Loreto's takes or how she presents them, but her indictment of how the M$M swept this tragedy under the rug for so long is spot on. It really shouldn't fall to ordinary people doing yeoman's work on social media to point out the glaring omissions in accountability that should have happened a long time ago. Which is why I hope to see a future post with your take on the newly mutated Toronto Death Star being taken over by Con donors hiding behind David Peterson as a Liberal figurehead, because I think that's going to have a chilling effect on how whistleblower breakthroughs like this are handled in the future. For instance who is going to look into Mike Harris bleeding grandma and grandpa to line his pockets at Chartwell now?

If you go on Twitter, read Tracy Kent and Mike Gibbs. They're former insiders with the ONPCs who quit the party in disgust, and have first-person awareness and dirt on everything from the cronyism and incompetence at Public Health Ontario to all the real estate crooks who underwrote Ford's campaign and now have their filthy snouts in the feeding trough of LTC investment. Tyler Watt is a young podcaster and recently graduated nursing student who has brought receipts of now deleted tweets by Merilee Fullerton complaining about red tape getting in the way of further privatization. You won't see that in any mainstream rag. Go see G.T. Lem's analysis from earlier today: Evan was his usual empty suit infotainment VJ today, running interference for Ford like he always does while allowing Cons and crocodile-tears gaslighting Singh to point the finger at Trudeau and the previous provincial Liberal governments. Christ, just turn Power Play over to Ben Mulroney already, it's no better than a celebrity gossip program as it is. These horrors are what's been happening in Ontario and what civilian sleuths have been screaming about while Canada's finest stenographers were focused on CHEESECAKE?!?!? Let them eat... oh, you know!

Doug Ford must resign immediately and heads need to roll at Queen's Park. This is criminal neglect en masse and an outright human rights violation. Sadly, Canada is losing its journalists at a crucial moment when it needs them more than ever. Trudeau was so prescient when, in his speech on the Easter holiday and Vimy Ridge anniversary, he invoked the fading Greatest Generation to hammer home the point that elders deserve so much better than this. But who will look out for them or speak truth to power, when power sponsors the truth? 💵 💰 📰

.. If 'Oh Canada' doesn't really mean anything or stand for much.. then why do we bother ? 'Glowing Hearts' is 'situational' now ? 'Stand on guard for thee..' too ? Every damn Canadian is important to me.. especially our vulnerable ones. I suggested months ago 'they're going to have to call in the military' when I saw the front line people in Healthcare were becoming overwhelmed.. beat down.. worn out. Ms Blue is correct giving credit to Ms Loreto. I found her tweets astonishing. The interlock of our military with Healthcare experts was initiated carefully in advance.. I was quite impressed by the advance quarantining and prep. I regret that so many of them had to face shocking failure & abuse.. and such dreadful human cost. A truly dark saga is unfolding Simon. Atrocity is the term..

Well said on all fronts. Ben Mulroney is the biggest ball of fluff on TV -- I'm always surprised that a stray puff of air from a swinging TV camera doesn't waft him away like a dust mote, along with the other vacuum head "personalities" on the morning show whose personas amount to "shrill" and nothing else, including the weather person.

The Star's takeover was almost bound to happen, It's been on the ropes for years, and who has money to burn? The billionaire types profiting off LTCs and dingy apartments rented to the public at exorbitant prices, that's who. Or pick some other rentier types who need a tax write-off.

I'm hoping, but not trusting, that Ford, whose mother-in-law tested positive for Covid-19 at her LTC facility, might have a revelation of spirit away from austerity meanness. He's been far better than expected on the plague situation. But only time will tell. Despite the military bringing the situation into sharp relief with their disbelief at conditions (makes 'em wonder what they're fighting for, I bet), the CBC has produced a segment showing numerous instances of shelved reports detailing the mess over the decades. There was never the impetus to do anything before now. Let the oldsters rot has been a societal problem.

My mother finished her days in an LTC, which I thought well-run. I took her out every week for the four years she was there. My brother visited every day after work for a few minutes. The staff told us we were the only relatives who showed up for weeks sometimes on a floor with 32 residents. Only at the annual lunch for relatives did many people show up! A dozen maybe. So let's be clear here, many of our fellow citizens dump people in an LTC and walk away. Let's not get all misty-eyed and forget our own behaviour in all this.

Hi Jackie....I too am very worried at who exactly are the new owners of The Star, and whether this is yet another Con takeover of our media. I have good contacts, and the Star building is just down the street, so detective Simon will get to the bottom of this budding scandal. As for the LTC scandal it's been a scandal for a long time, and I look forward to a public inquiry that will hopefully lead to a public takeover, and allow seniors to live their last years in safety and dignity.

Hi Bill....I share your view of our bubble head media. And I also agree that Doug Ford had been doing a better job than I thought him capable. But his decision to save money by reducing inspections will hsunt him forever. I once worked as a volunteer at a senior's home in Montreal. All I did was turn up with my beautiful gentle lab who made even the saddest residents laugh by proceeding to lick every face in the room. I hope this LTC horror show will finally bring about change. But I was reminded by the excellent way you and your family did your best to keep your mother company, that just providing a clean pleasant place to live in isn't enough, we have to do more to keep seniors entertained, and make them feel that they are wanted and loved...

Hi salamander...I feel like you do. I am horrified by the terrible conditions so many seniors have had to endure,. But I am equally horrified by some out there who are suggesting that old people are disposable, just so they can get back to making money in a hurry. I sympathize with those who have had their lives and their businesses turned upside down, but a few more weeks of trying to flatten the curve could save hundreds if not thousands of lives, so we need to be tough, and do what's right.
Thanks to Seb I have quite a few friends in the military, so I'm not just proud of the way our soldiers are performing, or the way they exposed that horror story, I'm worried that so many of them are getting sick, which makes me wonder whether they have the right protective equipment...

Re Canadian Forces
I didn't think they had the training or the equipment to be able to do much good.

I live in a town that has had a military garrison since Frontenac was governor. The military I know are very well trained in all sorts of esoteric areas and wildly adaptable.

I was not particularly surprised that they had the personnel to do this, just as I was not terribly surprised to see busloads heading towards the Alberta fires a few years ago.

The only difference is the eager young troops watching as the senior warrant officer intone, "This is a bedpan" as opposed to "This is a fire hose".

I am being unfair to the very highly trained medical staff who would be the authors of that report. The CF probably sent in some of their best who came out reeling in horror.

There is not any excusing Doug Ford's role in this, but at the same time it's been nothing short of fucking hilarious seeing you Liberal trolls and revisionists flailing away to absolve the McGuinty and Wynne Liberals of any responsibility in a problem that goes back to the Harris government days.