Donald Trump and the Forbidden Words 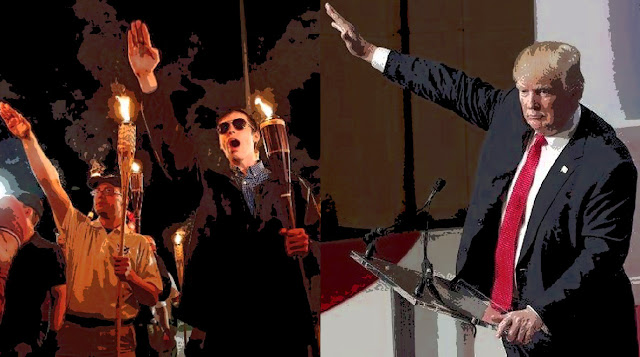 We know that Donald Trump likes to imagine himself as a Great Leader, commanding his Alt-Right forces to victory, over the decent and the different.

We know he wants to torch the planet, and anything Barack Obama ever built... 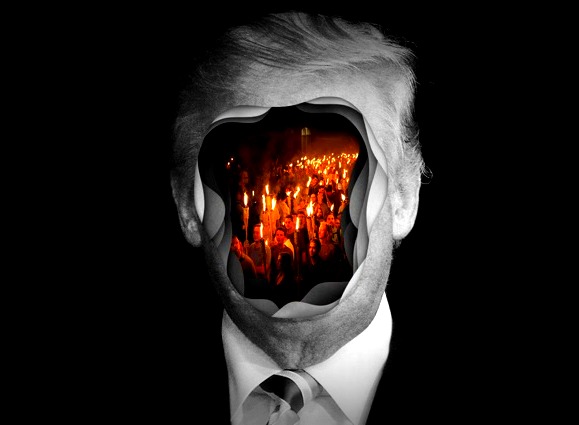 We know that he is almost certainly mentally ill, and could set the world on fire as early as tomorrow.

But now he's playing Big Brother, and it may be his scariest role EVER. 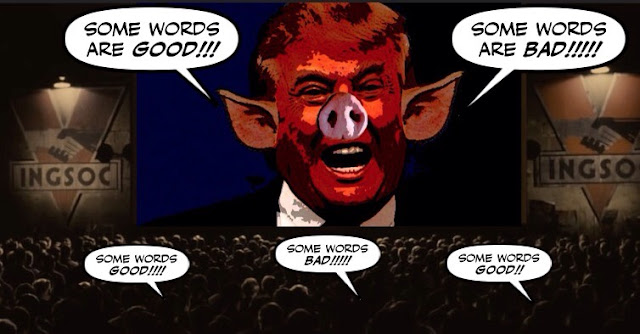 For now his faithful Nazis are telling scientists at the Centers for Disease Control that some words are forbidden, or verboten.

The Trump administration is prohibiting officials at the nation’s top public health agency from using a list of seven words or phrases — including “fetus” and “transgender” — in any official documents being prepared for next year’s budget.

Which is beyond belief, and the act of a madman.

For not only is Trump assaulting the rights of women, LGBT Americans, and the vulnerable that cannot be mentioned.

He's crippling the war on diseases that could kill millions, even billions of people. 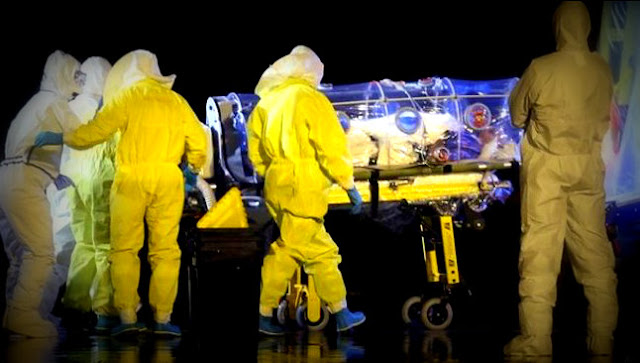 Even as he threatens to lead the world to war, and kill millions or billions of others.

And all we can hope for, from a scientific point of view, is that his greasy diet and those twelve Diet Cokes a day, will kill him FIRST. 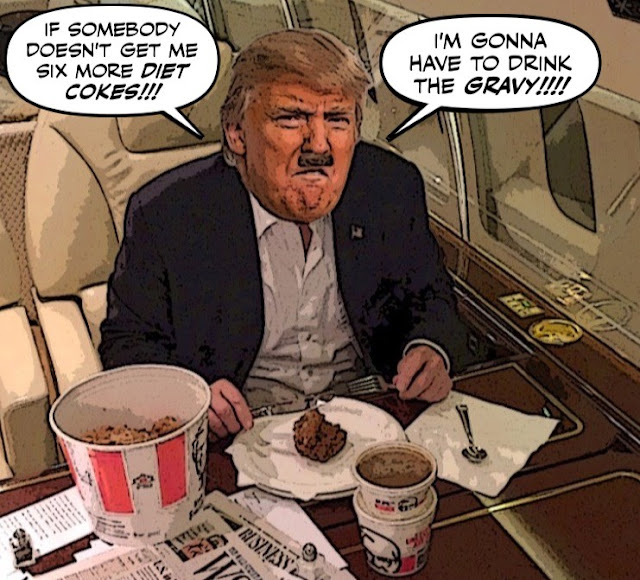 People who drank diet soda daily were three times more likely to develop stroke and dementia than those who consumed it weekly or less, according to a study published in April in the journal Stroke.

Or render him even more senile.

Donald Trump put the wrong birthdate on his New York absentee voter application form, leading Board of Elections officials to question whether his vote counted in the city’s most recent election.

The President was born on 14 June, 1946, but his application, obtained by the New York Daily News, lists him as being born in July.

So he can be quietly removed from office, and taken to a place where he can do no harm. 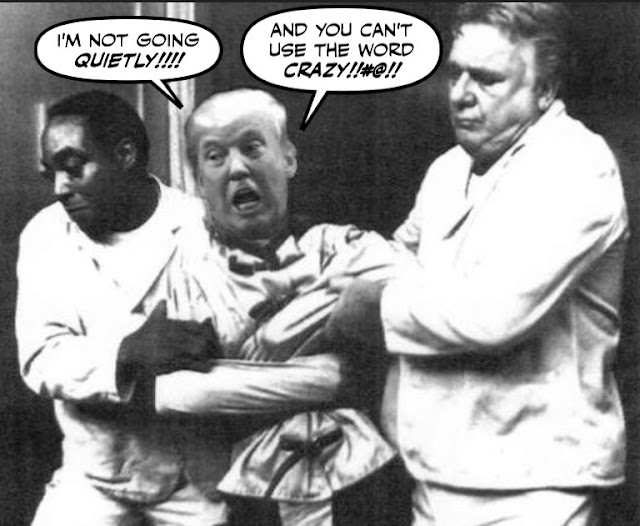 You know, Americans once had a chance to stop their would be Big Brother but they failed...

Now he's too dangerous to be allowed to remain in office.

Failure is not an option.

And resistance is the duty of every decent American... 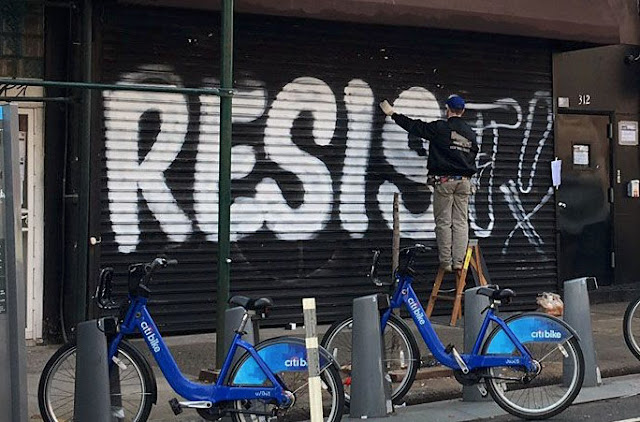 George Carlin has another set of seven dirty words that describe Trump to, well, a “T.” I wish he was alive. He'd rip the dotard to shreds, and lay waste to the idiots who follow him like lemmings off a cliff (and drag everyone else along with them). Trump and his cult are the epitome of Carlin's famous explanation of the term “average intelligence”: “Think of the dumbest moron you know, and realize that half the people are dumber than that!”

Orwell too must be spinning in his grave. The self-proclaimed smartest president ever -- who probably can't count to five on one of his tiny hands, yet claims an IQ of 156 (then again, he didn't indicate whether it was in positive integers) -- famously said that he “loves the poorly educated” and “never hires anyone smarter” than he is. Which explains the staggering incompetence of the bottom-of-the-barrel nitwit “apprentices” roaming around the trailer-park sanitarium for the cognitively impaired that is 1600 Penn these days.

Ignorance is strength, and wrongthink is thoughtcrime because it's wrong and a crime to think. Unfortunately, this isn't exactly a new development in the USA, but a problem that “very smart people” have warned us about before. The brilliant Isaac Asimov lamented that anti-intellectualism has always been embedded in American culture, if not hardwired into its very existence. Carl Sagan, writing shortly before his death, cursed the darkness that he saw enveloping his country and bringing about “a kind of celebration of ignorance.” Frank Zappa quipped that Americans treat common sense as though it were some sort of pathological disease. Or as the prophetic writer, cynical humorist, and social critic H.L. Mencken predicted way back in 1920 -- nearly one hundred years ago:

“All the odds are on the man who is, intrinsically, the most devious and mediocre — the man who can most adeptly disperse the notion that his mind is a virtual vacuum. The Presidency tends, year by year, to go to such men. As democracy is perfected, the office represents, more and more closely, the inner soul of the people. We move toward a lofty ideal. On some great and glorious day the plain folks of the land will reach their heart's desire at last, and the White House will be adorned by a downright moron.”

The best words, the most incredible, amazing words. Carlin, Orwell, Asimov, Sagan, Zappa, and Mencken, really great guys, let me tell you. People are going to be talking about them more and more, believe me...

Trump wants Muslims, Mexicans and now certain terms that make him uncomfortable banned. He truly is an affront to all things decent in this world Simon.
Jackie Blue notes his claim of an IQ of 156 but I believe he mixed up his blood pressure reading of 156 over 120 with his more accurate IQ of 70, the duh zone.
I hope he keeps tossing those cokes and assorted garbage into his dumpster yap to hasten the arrival of a really big, beautifully wonderful and incredible myocardial infarction.
JD

hi Jackie...thank you for those great quotes from those intellectual giants. However, I would point out that most of those you quoted are American, so you must be doing something right. ;)
But yes it's true, those are prophetic words, and it's a strange paradox. Never have we been so informed, and never have so many people celebrated ignorance. I'm sure there's a connection, and it's probably pretty depressing i.e. most people can only handle so much information, and it's having a deleterious effect on their minds, and on our politics. For that reason I try to stay off social media as much as possible, and try to avoid the trivia that can clutter up your life with useless information. I listen to music, I read books, I take in the beauty around me, and try to stay as calm and as contented as possible. Trump on the other hand is the living symbol of everything that is wrong with the way people are living their lives. And as I said in my post, let's hope his vulgar lifestyle takes him from us as soon as possible...

hi JD...Trump is indeed an affront to all things decent. The Jabba of all Juggalos. I don't believe anything he says, and you're right 156 sounds more like his blood pressure than his IQ. The man may have some kind of feral intelligence, the kind criminals have, but he's closer to idiot than genius. Unfortunately many of his followers are even more ignorant than he is, so instead of the blind leading the blind, we have the dumb leading the dumber. May Godzilla help us all...