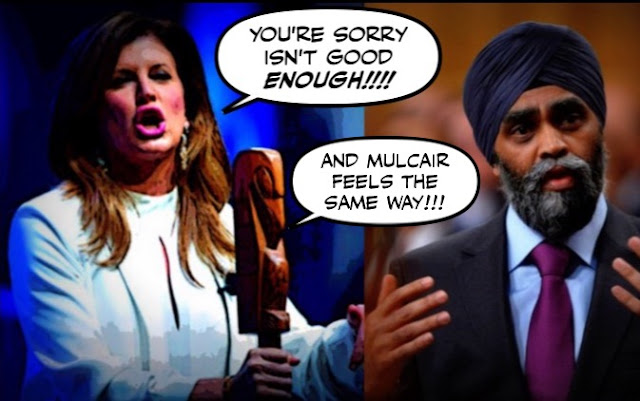 It may be the most overhyped story to hit the Commons in a long long time. And the most racist.

But the Cons are desperate to find something, anything, to try to hurt the Trudeau government.

So Rona Ambrose really did say this yesterday.

But then of course she should know eh? 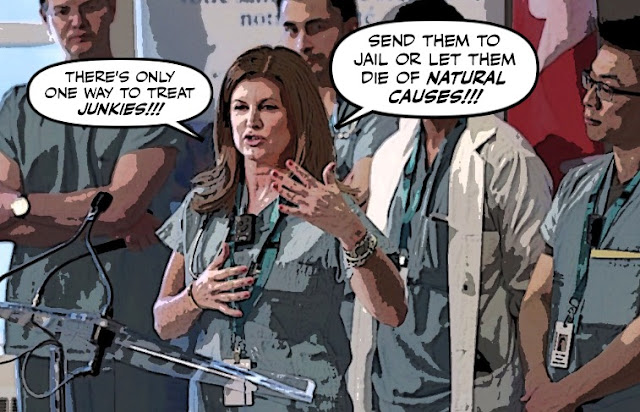 For her decision, while posing as a Health Minister, not to help opioid addicts, may have caused the deaths of thousands of young Canadians... 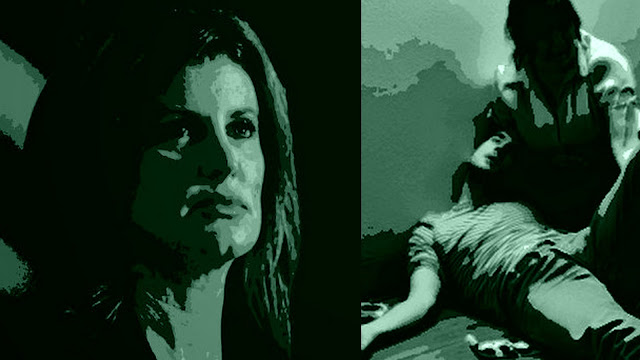 And goodness knows that cruel Con has never apologized, or said she's sorry.

Just like the bestial Stephen Harper never apologized for all the exaggerated claims he made during his foul years in power. 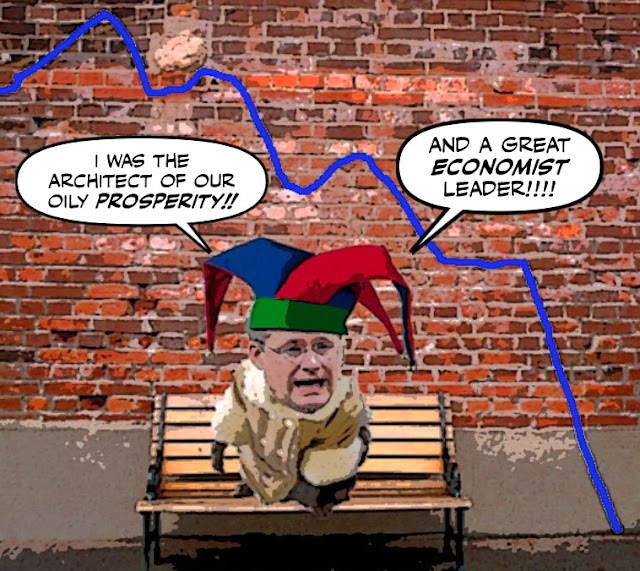 Even though he really did dishonour his country, unlike Harjit Sajjan, who served it with  courage and distinction.

Only to be treated with contempt by some of our disgusting Con media... 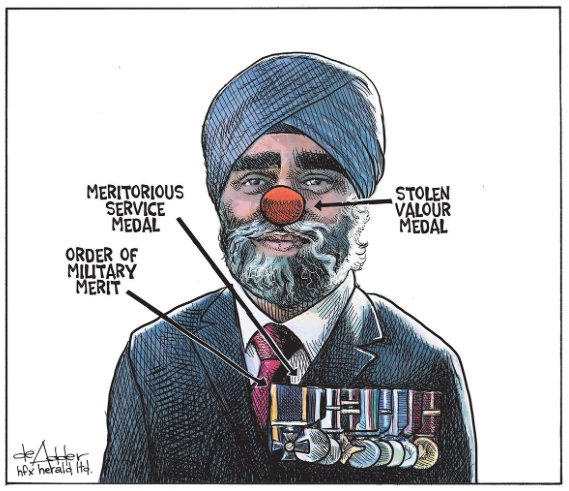 For whom Sajjan is just a brown man with a turban, and for that reason fair game.

And if that isn't bad enough, it's not just the Cons who are trying to smear the reputation of a man who is by all accounts a brave and decent soldier.

So are the losers from the NDP, and their deranged leader Tom Mulcair.

You know, the fat bumbling Nazi in the old TV series Hogan's Heroes, Mr I don't know NOTHING.

Which of course says more about Mulcair than it does about Sajjan... 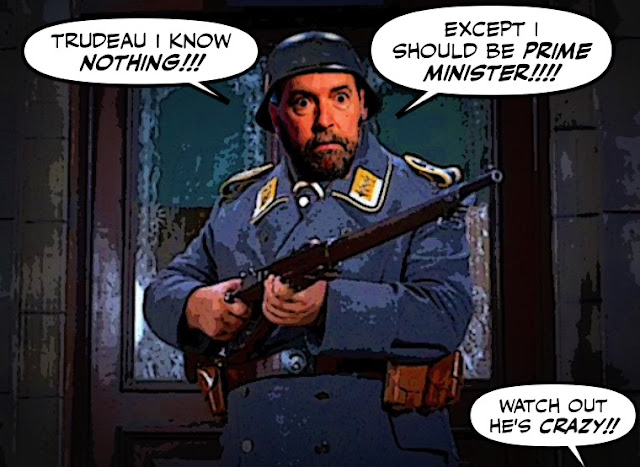 For it is just a dirty game. And if anyone deserves to be fired it's old angry Tom, for leading the NDP to disaster, and shooting himself in the foot.

You know I've said it before and I'll say it again. If Sajjan was working for the Cons rather than the Liberals, I'd still feel the same way about this case.

For I hate to see people bullied for no good reason.

Harjit Sajjan made a mistake, but it's not a firing offence,

He deserves better, and so does this country...

"You know I've said it before and I'll say it again. If Sajjan was working for the Cons rather than the Liberals, I'd still feel the same way about this case."

No one who actually reads your blog posts would actually believe that.

And unless people are attacking his race it's not racist, they attack him for being a liberal, race has nothing to do with it, it's just business.

Personally I don't care about any of this, I'm more concerned about Trudesu's broken promise on electoral reform.

No one gives a shit about electoral reform.

The cons and the NDP should be ashamed of themselves for trying to make a scandal out of nothing. Good for Simon for calling them out.

ygor, please don't assume what I or others may or may not believe. I happen to believe Simon. The only problem with his comment is that the more I think of it, the less likely I can come up with any Con MP who would be anywhere close to comparing to Mr. Sajjan in honour and valour so you'll never have a chance to disprove his claim.
JD

hi Gyor...I don't lie, and I mean what I say. The pettiness of the smear campaign against Harjit Sajjan offends me deeply, and is for me above narrow partisanship. And to suggest that racism plays no part in this sordid campaign is to ignore the fact that the Cons are now a racist party....

hi JD...thanks for standing up for me. Sadly Gyor's comment is just another example of what is wrong with the NDP. Once it was a principled party now it's almost as bad as the Cons. A small bitter attack machine, led by a loser leader, and with no good ideas of its own...

hi anon... thanks, and I agree with you. The Cons and the NDP should be ashamed of themselves for attacking a Canadian war hero for no good reason. A soldier who has served three tours of duty deserves better than that...

not personally knowing the players I cant say whether this is racially motivated or not, but I suspect this would be going on regardless of the colour of the minister's skin. The Cons and NDP have finally found something they can run with and they are going at it full tilt. its not much, but hey they are working with what they got. The government is running fairly well except for the federal government workers' pay system so Ambrose and Mulcair have to make do with what they have. The minister has apologized now every one ought to go back to sleep and wait for a real issue.

Canadians need to see the questions & answers per Mary Dawson interviewing Sajjan re potential conflict of interest - not calling investigation about Afghan Detainee facts. The roles he fulfilled during 3 Afghan tours were not mere 'reservist'

Any Afghan veteran will be able to seperate fact from fiction, simply by seeing Sajjan's service reoords or even a list of his postings. He was in the chain of command - he had orders. By examining his daily postings, senior officers etc in context to how the 'war' was conducted, it will be quite obvious how much he knew about prisoners of war, intel from interrogation, who was being picked up during ops etc etc.

To try and pretend he was not privy to intel gained from questioning Afghans is laughable. To pretend he was not privy to senior directives connected to diplomats or senio politicians is also laughable. The PM of Canada prorogued government to obstruct documents & avoid questions about Afghan Detainees being handed over for interrogation and torture.

Rona Ambrose missed the boat intentionally. She can't touch Sajjan without burning Stephen Harper & Peter MacKay, regsrding Sajjan's evasions to Mary Dawson. For goodness sake, have people forgotten Richard Colvin - Canadian diplomat in Afghanistan? Maybe somebody should ask him what Sajjan was doing over there as 'just a reservist'

Thank you for those very important reminders, Salamander. History and context.