Bill Maher Goes After the Progressives Who Helped Elect Trump 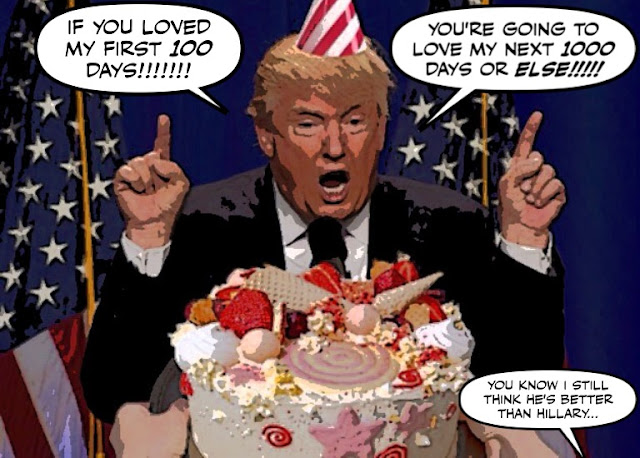 When I think of all the damage Donald Trump has done in just 100 days, and how many more people he might hurt or kill before his day is done.

Or wonder whether the planet will survive him and his bestial ignorance... 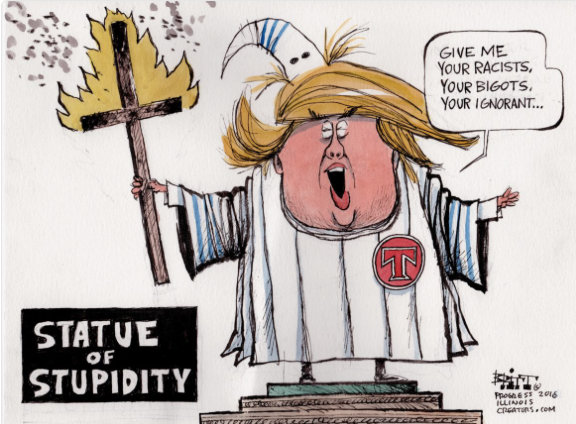 I can't help thinking of all those precious progressives who tried to make us believe that Hillary Clinton would be worse than Trump.

So I'm glad to see Bill Maher go after them with some biting words, and a giant cucumber.

Sadly in Canada we also have the same kind of precious purists who spend all their time going after other progressives, instead of the Cons.

And who don't seem to understand the need for progressives of all stripes to unite in a mighty coalition, if we are to destroy the fascists before they destroy our country.

Stop them, don't let those grubby snowflakes divide us. 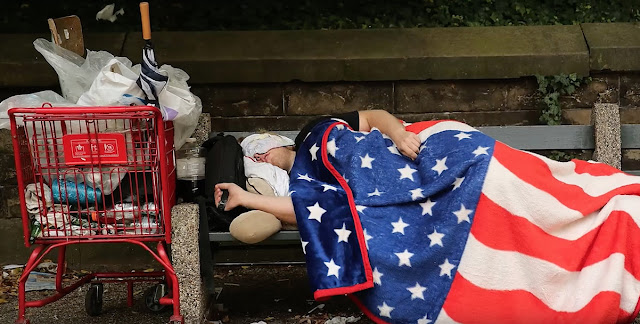 Bill 'lost' me a long time ago. His interview with Sen. Warren reminded me of why. He's an opportunist looking to grift and con AND he thinks Bernie should run again. Oh, as well- he enables the likes of Coulter, Conway and the rest of the skeletors. As far as I'm concerned he can F right O. I'll listen to Jon Oliver, any day.

100% agreed Simon. Same with the progressives shitting on Emmanuel Macron on this beautiful morning. Dude ran an inclusive Trudeau style campaign in a country plagued by unemployment and rocked by terrorism and won. If you can't rejoice over that, I cannot help you.

Hillary Clinton helped elect Trump by stealing the Democratic nomination from Bernie Sanders. The idiot stole the nomination and then went on to run a shitty campaign against Trump.

And, anyway, I wouldn't have voted for that corrupt mass murderer ever.

You think with your heart Simon. Not your head. But you don't even follow your heart consistently. One day you're condemning those who cause the deaths of innocent people. The next day you're calling those murderers "progressive."

Nah, Maher can't come back from his lengthy career of awfulness, capped by that stomach-turning appearance from Milo Yiannopoulos. There's an ocean of difference between an "imperfect ally" and a guy who happened not to be suckered in by a reality TV pitch man. I'm going to need a bit more commitment to the basic dignity of women, Muslims and the transgender community before he even approaches the lofty heights of "ally."

In my opinion, Maher likes to look like a progressive because he smokes dope, but really, he isn't. He is some one who is interested in promoting himself and making money. IF it works for Maher it works, but not much else. Yes, he can be very funny and when he takes aim at the right it works very well.

In a way he reminds me of Trump and B.C.'s Christy Clark. yes, the U.S.A. has Trump and B.C. has Christy Clark. Tomorrow, if we get lucky we may get rid of her but in this crazy world where progressives go after progressives, we have Weaver the leader of the B.C. Green Party saying he'll support Christy Clark over John Horgan, of the NDP, if there is a minority government. Yes, an eviornmentalist supporting some one who won't stop the bear kill in B.C. Christy Clark and her government has ruined rivers with their power projects, is building Site C dam which is an environmental disaster and 8 children die in care and still not making enough changes if any.

Upp with guys like Weaver who can't see the need for progressives to hang together progressives just aren't going to make it in the political world. we are too divided. So if you hear a great wail from the west tomorrow it will be that Christy Clark of the B.C. Lieberals win another term, along with her 25 former Stephen harper staffers.

Seems you might have stepped on a few toes Simon, perhaps it was the reference to the organic cucumber? Part of the problem is that there are many frames of reference and although perhaps its best to dwell on the immediate problems and let the bigger picture take care of its self perhaps its not.
Although its not a new theme I am of the opinion that technology has pushed civilization to a cross roads where bad choices can spell disaster for mankind. Technology has given us the power of annihilation by several mechanisms while freeing us from work at an ever increasing pace. In combination the two are toxic because the concept of meaningful work is not only a measure of individual self worth but also provides the means for survival and freedom. Remove the self worth and associated freedom, desperation sets in and desperate societies do desperate things.
Its not an impossible problem to solve but variations of the blame game, walled isolationism, short sighted crony capitalism or don't worry we will look after you like our other cherished pets are not solutions. There are two basic choices one leads back to the swamp while the other is the continuation of our evolutionary journey. I agree with you, first ensure we are on the right path and then work out the details of the journey.
RT

This is all true, but Horgan is an arse.

Hi liberalandlovingit...yes Maher can sometimes be a bit annoying. His interview with the hideous Milo Yiannopoulos is a good example of that. But I thought this rant was bang on. Those who thought Clinton would be worse than Trump deserve to be denounced....

Hillary stole nothing. Bernie's an Independent. She has more than paid her dues.
As to your 'flame-throwing-troll' remark- I am not here to defend American foreign policy. I am not here to re-litigate the 2016 election. And, I am mosdef not here to listen quietly while someone who has devoted her life to public service- be disparaged by people who a) cannot name a viable alternative and b) refuse to look back at the real enemies of the state- from Geo. Washington- right on down the line.
I am here to build on, not destroy, what is left of what we are.
You are a gloom and doomist. Fine. But that's not where it's at, man. The end is already determined- and the choice facing us is...how're we gonna go out?

Peace be upon you thwap.
Hope you find your nirvana.
lali.

Hi anon...yes I agree. Macron deserves a lot of credit for squishing Le Pen like a bug. Some progressives can't seem to understand that we are in a war with the right. And if we don't destroy the fascists they'll destroy us....

Hi thwap....I don't deny wearing my heart on my sleeve. Nor do I deny that Clinton was a weak candidate. But it seems to me that Trump is creating a warlike kleptocracy unlike any other the United States has ever seen. His position on climate change alone should be enough to reject him out of hand. And in life there is such a thing as the lesser of two evils...

Hi anon....Maher may not be my favourite TV talk show host, but what he had to say on this occasion was in my opinion worth saying.

Hi Simon.
"Be a bit annoying"? That is far too dismissive a description of Maher's character, which I believe is in question. A cat I once had was 'a bit annoying', ok?
If we focus on what lies ahead we would not have time to go around denouncing fools. That's an endless and worthless task.
Bill's doing it for Bill. Sees Colbert's ratings spike and thinks 'hey...$$$ - I'll take that train'. But guess what?
Money won't buy a ticket to ride on the only train that really matters.
He's just a tool, anyway.
FFTFTKNWTD.

Have a great one Simon,
lali.

Hi e.a.f...all talk show hosts are only interested in making lots of money and promoting themselves. However, comparing him to Christy Clark is definitely very original, and pretty scary. ;) And the sight of progressives fighting each other couldn't be more depressing. I have always tried to get them to at least form a coalition, and despite one failure after the other, I have no intention of giving up....

Hi RT... Yes, I do seem to have annoyed some readers, for no good reason. I am not a fan of Maher or any other talk show host. I just thought what he had to say was worth running. I'm afraid that these days people will reject what others have to say just because they don't like the person. My view is that whoever is the enemy of my enemy is my friend for the day...