Donald Trump and the Week From Hell 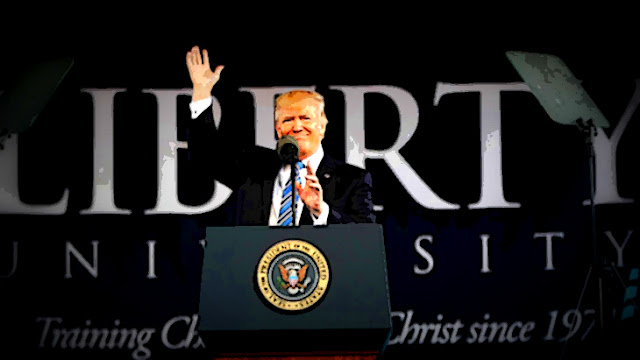 It seems only fitting that Donald Trump should end his week at Liberty University, invoking the name of God, and denouncing his critics.

Because for Trump it was a week from Hell.

A week when his inner beast, or inner fascist was finally revealed.

And he was seen to be both crazy, and dangerous, AND as dumb as a spoon. 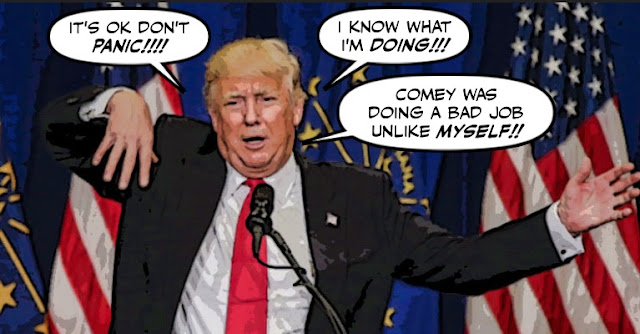 For first he fired the FBI director James Comey for daring to investigate him and his Russian connections.

Then he seemed to threaten Comey...

Then he hung his White House staff out to dry, by first telling them one story, and then changing it completely.

So they looked like fools, and he looked like a maniac trying to burn down his own house...

For if he did fire Comey for daring to investigate him, he could be accused of obstruction of justice.


If it looks like he threatened Comey, he could be charged with trying to intimidate a witness.

And of course by making many Americans wonder whether Trump secretly tapes his meetings and phone calls, he can only remind them of Richard Nixon. 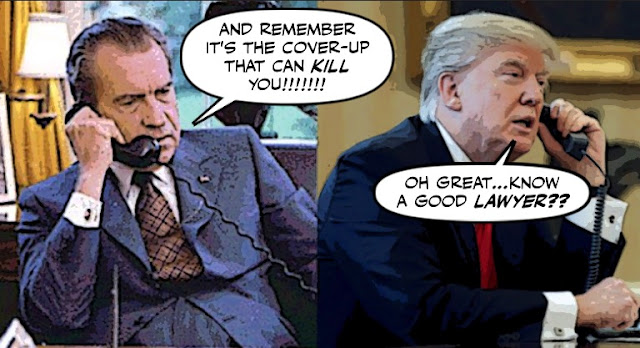 Especially since Trump also has a long history of secretly recording telephone calls.

Throughout Donald Trump’s business career, some executives who came to work for him were taken aside by colleagues and warned to assume that their discussions with the boss were being recorded.

“Talking on the phone with Donald was a public experience,” said (John) O’Donnell, author of a book about his former boss, “Trumped: The Inside Story of the Real Donald Trump.” “You never knew who else was listening.”

So that move wasn't too smart either.

And this scene at a recent White House dinner, should tell Americans all they need to know about the bestial nature of the Orange Oaf.

Dinner was served. Trump got a different, more colorful salad dressing than theirs. His chicken had extra sauce on the side. With his pie came a double helping of vanilla. With theirs, a single. By the magazine’s account, there was no explanation. None was needed. He’s the president and you’re not.

One scoop of imperiousness. Another of insecurity. Top generously with impulsiveness. That’s Trump’s sweet spot, the real driver of his decisions.

And it put the lie to the stubborn hope that there’s a core of shrewdness beneath his antics and a method to his madness. Mostly, there’s a raging, pouting child. 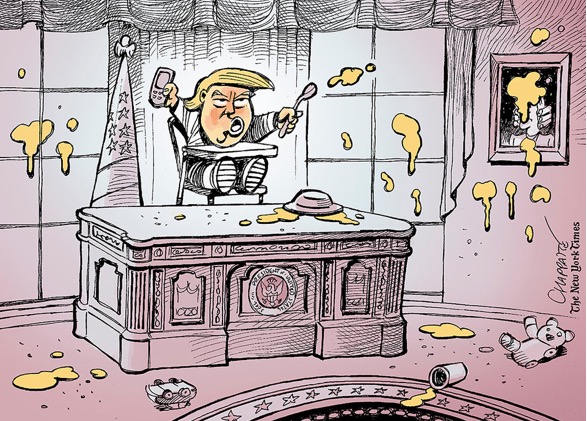 Or the little angry king.

Which needless to say couldn't be more terrifying.

But will hopefully motivate even more Americans to join The Resistance.

For now is the time go after the alien creature.

And send him back to where he came from.... 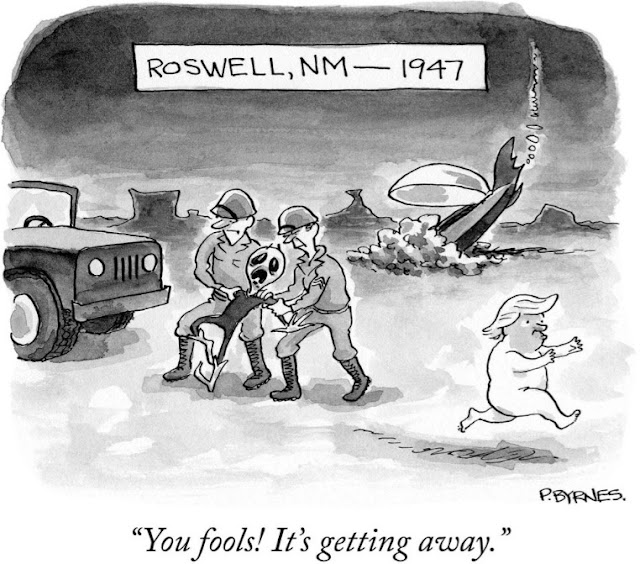 Labels: Donald Trump, James Comey, The Death of the Republican Party, The Madness of Trump

Resistance is futile. Here's an interesting exchange I though I'd share.

I was thinking about some of this behaviour yesterday: You may want to look up the term "confabulation".

I'd read that The Donald's speech to the university grads was a cliché ridden gabfest of all prior commencement address'. Far be it for him to be original or sincere.
What keeps astounding me is how Trump keeps making fools of his messengers and mostly himself, but there they are, day after day, standing up for this lump of shit.
I guess to them personal enrichment far outweighs being able to look in the mirror with any shred of self respect.
Love the last cartoon Simon. Is that an Unidentified Fucked-up Object?
JD

Trump vs the US government,who will win? So far he is just following the disjointed script that solved most of his business law suits. Ignore court discovery orders, counter attack with anything available .. counter law suits, personal innuendos,delays, and other forms of the carrot and stick approach. However, business law suits do not generally target individuals and can usually be settled with dollars ... especially in the US.
Like Hillary his current potential legal problems are personal and cannot be solved with paying a fine. Is it a conspiracy, just plain ordinary incompetence,were laws broken in a cover up? Tactical responses that worked in the business world do not reliably work and he is madly searching for the solution while the clock ticks away. The obvious response of any "strong man" caught in this situation is a Reichstag moment that allows him to seize complete power. Time will tell but its too early to celebrate his legal demise and very difficult to be positive about might replace him if he eventually falls on the Russian sword. A pissgate or business corruption type of ending would be much more preferable but it seems that there is a two fold agenda at play, both Trump and Russia.
RT

Long live Trump making a fool out of the Repulicant. President Pence will be a boring guy with magic underwear who cant meet females without his wife who he calls mother.

Liberty University a oxymoron squared. Dont believe in liberty, and not a university

Hahahahahahahahaha! MC, you're hilarious. You really are desperate and grasping at straw when you post the opinion of a convicted felon who isn't even a Canadian citizen. A spoilt rotten man-child living the life of illusion, similar to Drumpf. Pitiful!

hi MC...I knew you Trump supporters were having trouble finding anyone to defend your man, but Conrad Black? With friends like him who needs enemies?

hi jrkrideau.... yes that's not a bad word to use when describing Trump. I would only add confabulation as practiced by a child who desperately needs to be loved....

hi JD...I actually watched part of that speech on YouTube, and you're right it was a cut and paste version of a commencement address. And as for Trump's attempt to portray himself as a pious person, and a crusading defender of the Christian religion, I didn't know whether to laugh or cry, it was that absurd. And I'm glad you liked that cartoon, I love it myself....

hi RT... I always try to be as optimistic as possible, but it is unfortunately far too early to celebrate Trump's demise. He is definitely heading in the wrong direction, but until more Republicans disown him he's not going anywhere. And the danger is that he could start a war in a desperate attempt to try to distract us...

hi Steve....when Trump is replaced by Pence, will you transfer your allegiance accordingly? Early mornings, cold showers, and long prayer sessions should atone for the sin of Trump worship... ;)

hi Steve....yes, it's too bad they don't call it Falwell University for that would make its character more obvious. Although to be fair, I see that a fairly large number of students objected to Trump giving the commencement address...