Donald Trump and the Trumpcare Bill That Will Destroy Him 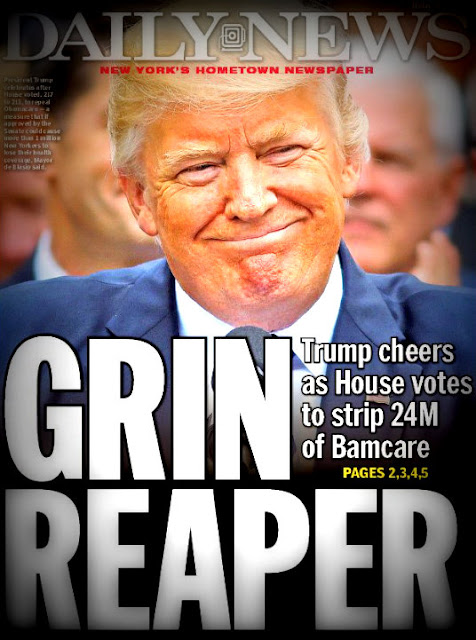 The front page of the New York Daily News sums up the situation well.

Donald Trump grins moments after the House of Representatives had passed his Trumpcare bill.

While his Republicans prepared to party...

Even though the bill would take health insurance away from at least 24 million Americans.

And condemn many of the poorest and the most vulnerable citizens of that country to a death most miserable. 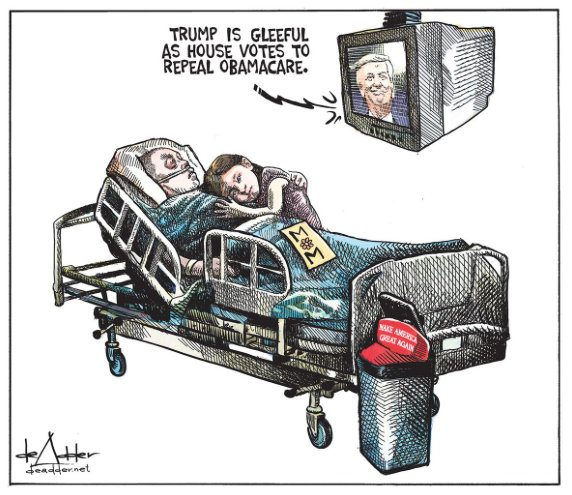 For the bill isn't just a disaster.

Groups representing doctors, hospitals, nurses, older people and people with illnesses like cancer opposed the bill. Just 17 percent of Americans supported an earlier version of the measure, and Republicans have made the legislation only worse since that poll was conducted.

Mr. Trump in particular has been spreading misinformation and lies about health care, arguing that the legislation would lower costs while guaranteeing that people with pre-existing health conditions could get affordable health insurance. It would do the opposite.

It's an absolute abomination.

I won’t mince words. The health-care bill that the House of Representatives passed this afternoon, in an incredibly narrow 217-to-213 vote, is not just wrong, or misguided, or problematic or foolish. It is an abomination. If there has been a piece of legislation in our lifetimes that boiled over with as much malice and indifference to human suffering, I can’t recall what it might have been. And every member of the House who voted for it must be held accountable.

It will kill untold numbers of Americans.

Those deaths are not abstractions, and those who vote to bring them about must be held to account. This can and should be a career-defining vote for every member of the House. No one who votes for something this vicious should be allowed to forget it — ever.

Read this and weep.

Those who voted for it must be held accountable.

The Republican health-care bill is an act of monstrous cruelty. It should stain those who supported it to the end of their days.

And because the Democrats know how millions of Americans, including many Trump supporters, are going to react when they finally realize they've been conned.

They were singing this song yesterday...

To celebrate the beginning of the end of the Trump regime.

When Trump returned to New York yesterday for the first time since taking office, he got a taste of what lies ahead.


And it won't be pretty.

Today he'll come bearing flowers to try to cover up his crimes... 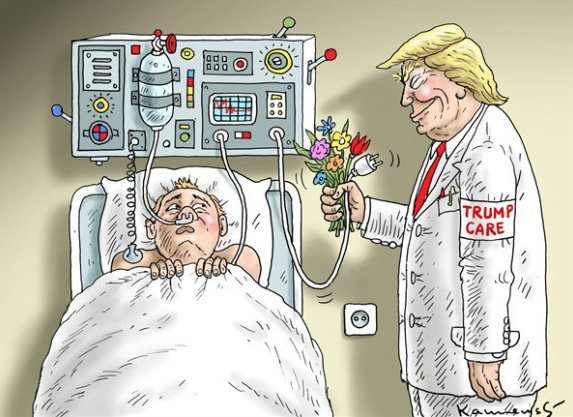 But he won't be able to fool most Americans for much longer.

And soon the flowers will be for him...

Labels: Donald Trump, The Death of the Republican Party, The Madness of Trump, Trumpcare

Don Adder's depiction is the most touching political cartoon I have ever seen.

Trump's not fooling anyone. His supporters overwhelmingly voted for him to repeal Obamacare, and he's done so. Promise made, promise kept. His supporters have been conditioned by years of hate radio, Fox News and evangelical Bible pounding to see illness as a sign of moral weakness or God's displeasure. Put yourself right with God, they say, and all will be well. If not, you deserve anything that comes at you.

Americans see the Dems for the feckless corporate sell-outs they are.

Anon 10:26 Trump supporters may have supported the end of "Obama Care" but there is evidence they may also support the ACA without realising they are one and the same. Misinformation and lies often are exposed for what they are once reality sets in, despite stupidity, ignorance and prejudice. Instead of changing the ACA to make it work for more people, the GOP has destroyed the healthcare of millions, many of whom do support Trump.

I will not argue that the Dems do not share blame for the rise of corporatism in the USA, but placing the blame mainly on their policies shows a poor understanding of American political history.

hi anon...it is a powerful cartoon isn't it? And the situation fills me with horror. I simply can't believe that the richest country in the world would take away the medical insurance of at least 24 million people. It's a crime against humanity in my book, and absolutely unforgivable...

hi anon...much of what you say is true. But I believe you're wrong when you say that his monstrous Trumpcare bill isn't going to hurt the Republicans. Remember Trump said his bill would be better and it most certainly isn't. So I think it's going to take down at least 20 Republicans in moderate areas. And eventually even cost Trump control of Congress. The Democrats may be corporate sell-outs, but from now on they won't be the ones causing mass misery, and that will hurt the Republicans...

what filcher says is quite true. have read a number of articles and watched interviews where people actually thought Obamacare and the ACA were two different things. When they were asked they said they wanted rid of Obamacare. /then they were asked if they liked, what ever medical service they were discussing and they said of course, but that was the ACA. Some of those Republicans are about to find out the ACA and Obama care are one and the same. People will not take it well when they have had the health care and then suddenly it stop especially if it stops mid treatment for them or their families and friends. that could turn real ugly real fast.

Many of these people believed Trump when he told them they would get something better. what he didn't do was give any details. some of those congress people hadn't even read the bill when they voted for it.
If one of mine died because of a repeal of health care I'd be taking the body to the politicians office and ask them to explain why they killed my family member. Yes, there was one congress man who actually said people would not die if they didn't have coverage......ya, right.