Donald Trump, James Comey, and the Kiss of Death 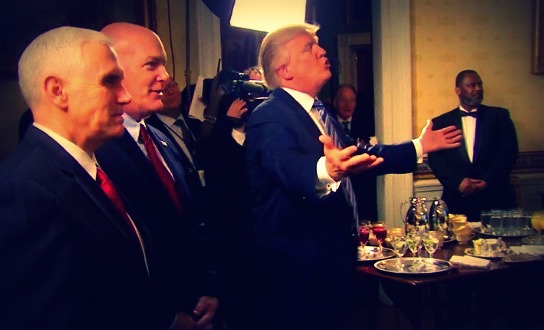 A few days after he was sworn in as President, Donald Trump spotted FBI director James Comey at a White House event and blew a big orange kiss at him.

He was happy with Comey for having knifed Hillary Clinton in the back two weeks before, and helped him win the election.

And for Comey it turned out to be the kiss of death. 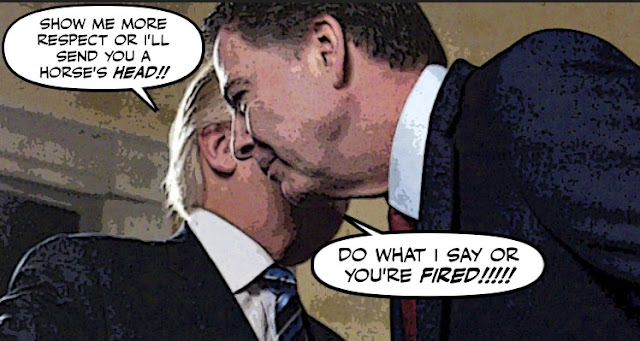 Now that Trump has fired him like a  servant.

President Trump on Tuesday fired the director of the F.B.I., James B. Comey, abruptly terminating the top official leading a criminal investigation into whether Mr. Trump’s advisers colluded with the Russian government to steer the outcome of the 2016 presidential election.

In the manner of a dictator or a traitor... 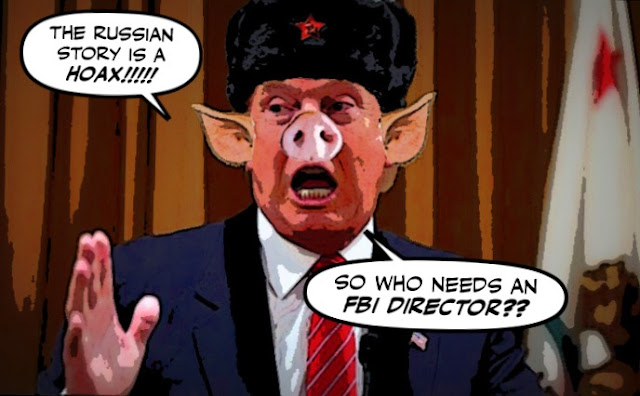 The stunning development in Mr. Trump’s presidency raised the specter of political interference by a sitting president into an existing investigation by the nation’s leading law enforcement agency.

For the most ridiculous of reasons.

Mr. Trump explained the firing by citing Mr. Comey’s handling of the investigation into Hillary Clinton’s use of a private email server, even though the president was widely seen to have benefited politically from that inquiry and had once praised Mr. Comey for his “guts” in his pursuit of Mrs. Clinton during the campaign.

Even though it's clear he's terrified about what the FBI might reveal about his Russian connections.

And he wants to replace Comey with a Trump stooge as CNN's Jeffrey Toobin argues in this clip:


But if Trump thinks he can get away with this outrageous behaviour he's sadly deluded.

As the New York Times editorial board points out, Trump's real motives are only too obvious.

Mr. Comey was fired because he was leading an active investigation that could bring down a president. Though compromised by his own poor judgment, Mr. Comey’s agency has been pursuing ties between the Russian government and Mr. Trump and his associates, with potentially ruinous consequences for the administration.

And the scandal can only fuel demands for the appointment of a special prosecutor.

We have said that Mr. Comey’s atrocious handling of the Clinton email investigation, which arguably tipped the election to Mr. Trump, proved that he could not be trusted to be neutral, and that the only credible course of action would be the appointment of a special prosecutor. Given all that has happened — the firing of the F.B.I. director, on top of Mr. Trump’s firing of the acting attorney general, Sally Yates, and his dismissal of nearly all United States attorneys — the need for such a prosecutor is plainer than ever.

Especially since some are comparing Comey's firing to Richard Nixon's so-called Saturday Night Massacre when he fired the special prosecutor investigating the Watergate scandal... But it didn't work then, and it won't work now.

Trump, like Nixon, will fail, for a simple reasons: The institutions he is assaulting daily are stronger than he thinks. His autocratic instincts have been checked every step of the way. Trump will, inevitably, be spanked again.

This president may think himself unassailable, but Americans are seeing him for what he is: a tin-pot tyrant.

All it will do is turn the wave of anti-Trump protests into a veritable tsunami.

Trump may not know it yet, but his days in power are now numbered.... 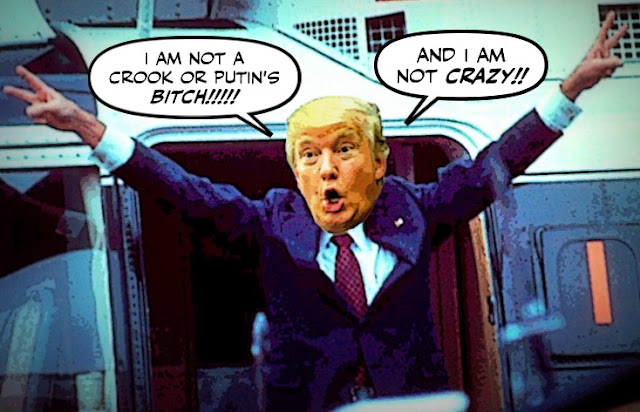 He is going down. Enjoy the show.

Strange; I forgot that Harper won the last election.

The first photo, with the grinning older white men in suits and one Black person - the man who is a bartender or waiter serving them - is so telling. Trump also sacked the chief usher of the White House, a Black woman.

Anon 11:05 here. Harper was voted out of office by the electorate. He was not brought down by any of the institutions, conventions or traditions of parliament, despite his flagrant abuse of them (see e.g. being found in contempt of parliament, proroguing twice to avoid a no-confidence vote, refusing to produce documents demanded by parliament, refusing to produce documents in violation of a court order, interference in the supposedly independent senate, and on and on). None of that brought down his government, in fact, he was re-elected with a majority after much of it.

Don Post
If Jesus Christ himself showed up today and told the American people that Trump was evil, Trump supporters would scream, "GET THE HAMMER AND NAILS! That liberal socialist hippy is BACK!”

You Can’t Fire the Person Investigating You -- The Resistance with Keith Olbermann | GQ
https://www.youtube.com/watch?v=6yM1wGaQ7zY

Outside the White House, however, several hundred people gathered for a noon-hour protest, brandishing signs with slogans like "Special Prosecutor Now" and "Impeach Trump."

Harper lost an election he wasn't expected to win. In fact, no PM since Laurier has been elected to more than 3 terms. But for almost 10 years Harper freely ass-raped Canada's parliamentary traditions and institutions. Trump will do the same in the US.

It's the US not Canada. Different constitution, etc.

It plays like a remake of the Keystone cops with the hapless cops/politicians bumbling around while the villain calmly walks out the front door of the bank with all of the citizens hard earned money including the keys to democracy. If he is successful and we survive wonder what it will be like in Canada; sandwiched between two powerful despotic countries. Because the leaders share many common traits and some mutual admiration, will we be used for romantic getaways or just something to be divided up as any semblance of a democracy might prove contagious?
RT

The constitution has the power of law, supreme law. I'm talking about institutions, conventions and traditions - things that aren't law.

Trump has already flouted plenty of them with impunity, e.g. refusing to release his tax forms, refusing to place his assets into a blind trust, refusing to get rid of his private security despite having a Secret Service detail, doing nothing to eliminate conflicts of interest, failing to appoint second-tier cabinet officials, making unfounded accusations of spying against a former president, nepotism in hiring, witness tampering, firing people investigating him - Yates, Bharara, now Comey. I could go on, but you get the picture.

I expect all that to continue, since Republicans will not hold Trump to account. He is effectively above the law, just as Harper was. Our institutions are not as robust as people think they are.

What will Trump eventually do?

As he [President Ted Cruz] was announcing his unprecedented deal at the UN, the international satellite feed was disrupted by a transmission from Moscow. An exultant Donald Trump appeared, dressed in a gaudy vintage cossack uniform and sporting a luxuriant orange handlebar moustache. Standing beside him was a voluptuous woman in a skimpy metal and fur bikini, wearing a shocking pink Pussy Riot ski mask. The Donald spoke to the camera with a thick Russian accent.

“So two Corinthians walk into a bar – just kidding! But seriously folks, please allow me to introduce myself; I’m a man of wealth and taste. My real name is Boris Kropotkin. I am not really the phenomenally successful and lovably charismatic real estate tycoon you have all known, idolized, emulated, and abjectly envied all these years.”

He paused for effect, then continued with a benign smile: “I am actually a faithful Marxist/Stalinist ideologue, dialectical materialist theoretician, master propagandist, and ninja assassin – and of course, an amazing, really quite terrific, very very tremendous award-winning performance artist, recruited by the KGB back in the 1970s.”

Grinning sadistically, he continued: “As you may now surmise, my entire business and political career has been a great, brilliant, yuuugely classy and believe me, fantastic brutal satire of predatory buccaneer capitalism, manifest destiny, and American exceptionalism. My close personal friend Bad Vlad has just given me this delightful little trinket in return for services rendered.” He held up an Order Of Lenin medal.


Another insult to Chancellor Merkel.

Comey refused to prosecute crooked Hillary Clinton because he said Hillary had no ‘intent’ to commit crimes. Comey had no right to decide Clinton’s guilt or innocence. That should have been left to the courts. The evidence against Hillary was overwhelming, and she still needs to be locked up. Intent has no bearing on case.

Comey also claimed he was looking into Trump’s ‘Russian’ connections, which were non-existent. Hillary invented the Russian story to deflect from her criminal activity while also providing her a convenient way to blame ‘Russian hackers’ on her defeat. The corrupt mainstream media breathlessly spread this fake news. Hillary had more to do with Moscow than Trump ever did. Bill Clinton raked in $500,000 for a speech there. Shortly thereafter Hillary allowed a Russian company to gain control of a large percentage of US uranium reserves. Classic pay for play. But Comey didn’t investigate that, which was a real scandal—oh no. Comey allowed the FBI to become a political tool for his deep state masters.

Comey was also a bumbler. He repeatedly failed to pursue chances to end incidences of Islamic terrorism. He granted Hillary’s aides immunity unnecessarily and allowed evidence to be destroyed. He didn’t investigate Obama's scandals. He was, after all, appointed by Obama.

Comey actually said in July 2016 "“In looking back at our investigations into the mishandling or removal of classified information,” Mr. Comey said, “we cannot find a case that would support bringing criminal charges on these facts.” "
https://www.nytimes.com/2016/07/06/us/politics/hillary-clinton-fbi-email-comey.html?_r=0

Comey led the investigation but he stated his informed opinion based on facts. Opinions of others, is based on innuendo and supposition. Do not confuse alternative facts with reality.

"Comey also claimed he was looking into Trump’s ‘Russian’ connections, which were non-existent "

No, we know that many key officials have Russian connections that they lied about, only to be revealed at a later date. Again you have confused alternative facts with reality of a situation.

"Comey was also a bumbler. He repeatedly failed to pursue chances to end incidences of Islamic terrorism. "

There have been few instances of "Islamic terrorism" in the US under Comey. I would have preferred seeing more "Christian terrorism" ended, as that is the main terrorist group today in N America.

Yes, let the billionaire who is making money as a businessman, while engaging in possible conflicts of interest as President, drain the swamp. The swamp has always catered to the people who are in Trump's cabinet, exactly those that make the swamp corrupt and smelly.

I expect better of you MC - you are usually able to produce a thought provoking critique to Simon's posts, but you definitely fall short here.

When Hillary set up her personal server it was not a crime. She did delete emails which was potentially a crime if criminal coverup could be shown. The FBI thoroughly investigated by tracing as many deleted emails as possible to as many destination as they could ( which were most) but could not find any intent to cover up a crime related to Beghazi or any thing else. Hence the finding that she was careless but did not commit a crime.
Trump surrounded himself with people that had Russian connections during his campaign and even appointed one as security chief. The FBI (Clapper testimony) has already concluded that Russia hacked the presidential election. They now want to determine who if any Americans were involved or were they just unwitting stooges. It would seem to me that the American people have a right to know and if they cannot trust the FBI who can they trust? If the FBI cannot be trusted it would be logical to set up a neutral team of investigators that both parties have confidence in but Trump does not want that, why? So far the only winners are the Russians, imagine if they manage to destroy America from the inside out for what probably amounts less than a few billion dollars.
RT