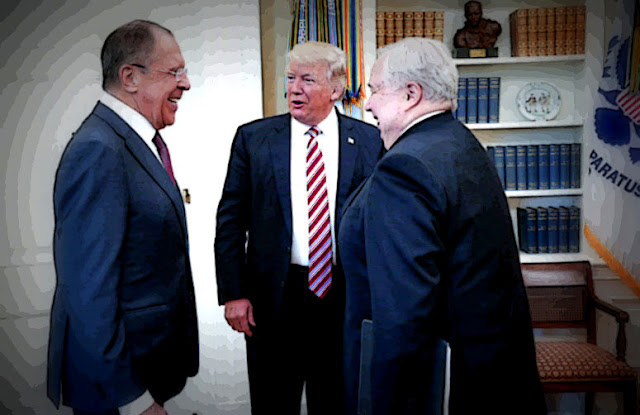 Oh well, at least now we know why those Russian diplomats seemed to be having such a good time in the Oval Office, while Donald Trump seemed strangely out of it.

Not only had he shared some top-secret intelligence with them, after ordering the White House media out of the room.

It seems Trump also told the Russians why he had fired the FBI director James Comey.

And once again managed to shoot himself in the foot.

By making himself sound both guilty AND crazy. 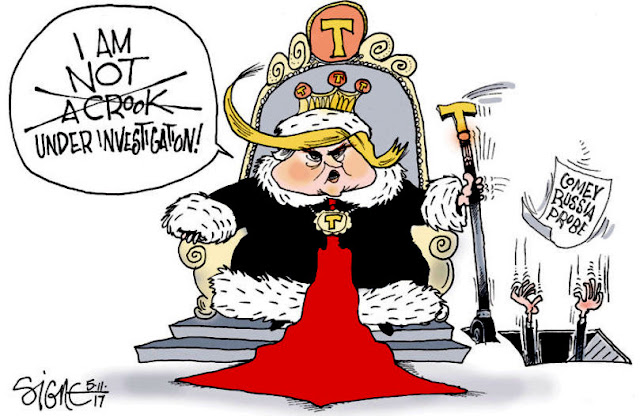 President Trump told Russian officials in the Oval Office this month that firing the F.B.I. director, James B. Comey, had relieved “great pressure” on him, according to a document summarizing the meeting.

“I just fired the head of the F.B.I. He was crazy, a real nut job,” Mr. Trump said, according to the document, which was read to The New York Times by an American official. “I faced great pressure because of Russia. That’s taken off.”

For it's all sounding more and more like obstruction of justice.

The conversation, during a May 10 meeting — the day after he fired Mr. Comey — reinforces the notion that the president dismissed him primarily because of the bureau’s investigation into possible collusion between Mr. Trump’s campaign and Russian operatives.

Which of course is a criminal and an impeachable offence.

And it certainly explains why James Comey did his best to ward off Boss Trump's advances, after he blew a kiss of death in his general direction...

Only to be dragged into a ghastly embrace...

And then fired by the nut job in the White House, who as late as Thursday was still insisting that Comey's firing had nothing to do with the Russian probe. 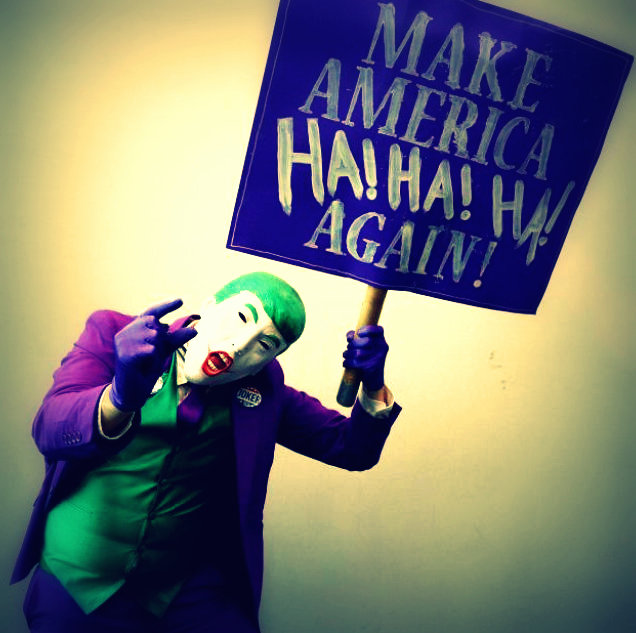 But the good news is that Comey is not easily intimidated, and after all that Trump is saying about him seems more determined than ever to tell his story.

Former FBI Director James Comey has agreed to testify to a top Senate committee, an event that could prove a pivotal moment in the fate of President Trump's besieged administration.

While Trump is just digging himself even deeper into a hole that could turn out to be his political grave. 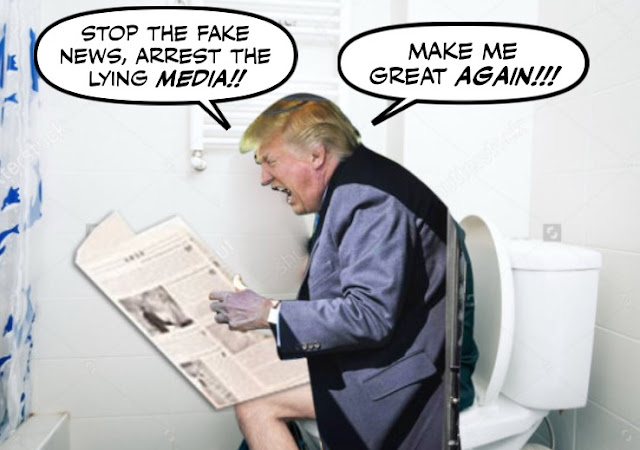 As the scandal just keeps on growing.

The law enforcement investigation into possible coordination between Russia and the Trump campaign has identified a current White House official as a significant person of interest, showing that the probe is reaching into the highest levels of government, according to people familiar with the matter.

The senior White House adviser under scrutiny by investigators is someone close to the president, according to these people, who would not further identify the official.

You know, I'm still haunted by what Dan Rather had to say the other day...

And I realize a lot of people are in a hurry to impeach Donald Trump.

But I think that would be a mistake. It won't be that easy, so people shouldn't get carried away.

And why rush things when Trump is slowly but surely destroying himself and the Republican Party?

Just give him enough time, and enough rope.

And he'll take them all down with him.... 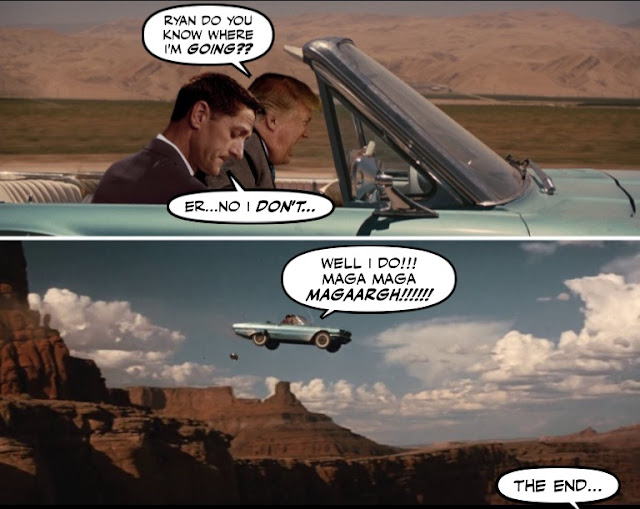 making himself sound both guilty AND crazy.


Err, well, he is. I still don't believe in the Russians to Elect the President line but he almost certainly has enough dodgy or illegal dealings with various Russians and people from other former Soviet republics to ruin him. The possibility that his organization was laundering Iranian Republican Guard monies, alone, is enough to seriously compromise him I would think.

And come to think of it, I still don't understand why no one has challenged him on his attempt to do business with Cuba.

He was absolutely crazy to fire Comey but it does not look like he can visualize other people's reactions. He's more than old enough to remember the Watergate and Clinton affairs but he probably never noticed them unless there was money to be made and so had no idea of what it meant to have a special prosecutor appointed.

As far as I can see, having a special prosecutor looking into the affair is a bit like having the Holy Inquisition (not the batshit crazy Spanish one) carrying out an inquiry. The special prosecutor has carte blanche to do anything and go anywhere he likes as long as it's legal.

There is probably much burning of paper and wiping of hard drives in the financial organizations of the world right now.

Slight correction. I think that should be "Iranian Revolutionary Guard" not "Republican".

Having spent considerable time watching all the news clips of the stooge with the 2 bears in the oval office, That is Trump's happy face. He is clearly so over joyed and happy because he thinks he made the Russians happy and just may be they will accept him as one of the big boys.

Trump may be rich, but not like those Russian boys. Donald is just a simply billionaire who actually has to borrow money and work for it. Those Russians, they have so much, they are so much wealthier and have so much more power.

Trump most likely told them he fired Commey to impress them, but really, it is doubtful they were. In Russia they get to kill the guy they don't like, not fire him. that is why the two bears were most likely laughing. Its why he "shared" spilled the beans on important intelligence. He was still trying to impress. Under all that carry on, I think he is still a very scared little boy trying to get some one to like him. Now he finds out he might be sent to his room, or have his room taken from him for trying to make friends. Ah, poor Donald.

Perhaps if Mossad is really pissed with him, he might not come back from the trip. You just as an object lesson.

Love the "photo" of Trump sitting on the toilet! I recall on SNL someone said that is how Trump always sits in photo ops with foreign leaders or when he is interviewed by the "fake" media (eg. CBS, MSNBC) and the "real" media: Fox News. Trump always sits as if he is sitting on the toilet! Does he think it hides his big gut if he sits forward, on the edge of the chair?
(Some would argue Trump is "on the edge" anyway!)

The cold open of this week’s episode of Saturday Night Live featured a reimagining of the interview that Donald Trump gave last week to NBC’s Lester Holt. Here is an incomplete list of the news items and general observations SNL referenced in that sketch:

- the loyalty oath that the newly inaugurated President Trump is reported to have demanded of then-FBI director James Comey, shortly after the former’s inauguration
- the viral eye roll Anderson Cooper gave, this week, to Kellyanne Conway
- President Trump’s seeming admission, during his actual interview with Holt, that he fired Comey because of Comey’s Russia investigation—which might seem to open him up to obstruction of justice charges
- the “bonkers” candidates who are under consideration to replace Comey
- Judge Judy
- the unfavorable “optics” of Trump’s meeting with the Russian ambassador, Sergey Kislyak, the day after he fired Comey
- Paul Ryan’s seeming eagerness to do the bidding of President Trump
- historians’ and other commentators’ comparisons of President Trump to President Nixon
- the recent back-benching of Kellyanne Conway
- Trump’s assertion, in an interview with The Economist, that he coined the longstanding economic phrase “priming the pump”
- Trump’s obsession with having won the election
- Trump’s having lost the popular vote
- Trump’s having bragged, before an appearance on Access Hollywood, about sexual assault
- Trump’s tendency to breathe heavily into microphones when giving speeches and interviews
- Trump’s tendency, according to SNL, to “sit on every chair like it’s a toilet”

The swamp puppet just signed a 100 billion arms deal with the Saudis. Wonder how many lives that represents (including Americans) as the weapons move through the life cycle of mayhem and destruction.First used by the rulers to oppress the opposition and then by the others as they fall/sold into the wrong hands. Although there is a good chance Pinocchio will be banished to the wood pile, there is a long line up of swamp puppets to replace him. Seems the bottom of this self inflicted cycle of misery is nowhere in sight! Still can't do it all with drones so next comes the selling of more American blood to the highest bidder.
RT

hi jrkrideau...I must admit I have no idea what kind of dodgy dealings Trump is trying to conceal. Or why he seems so determined to defend the lunatic Flynn to the point that according to a new report he still dreams of making him his White House adviser. The only thing I can think of is that money and a privileged upbringing have made Trump believe he is not subject to the same laws as the others. And thanks for the correction. The Iranian Republican Guard sounds even worse than the originals...;)

hi e.a.f...I think that Trump has a crush on powerful people, no doubt due to some bad toilet training from his ghastly father Fred. He goes all mushy around them, and practically bends backwards trying to impress them. Let's just hope that on the religious crusade he is now on he doesn't offend too many people, and trigger another Mideast war....

hi David...yes I've noticed that stage posture. I think it's just a way of getting in the face of those he is trying to impress or bully, much like the way he grabs people's arms and pulls them towards him. I mean, try to imagine sitting facing Trump and have that head staring at you only a few inches away. That would probably be enough to terrify most people... ;)

hi RT....yes, a $110 billion arms deal and a promise to invest $20 billion to upgrade infrastructure in the U.S. It's pretty clear the Saudis are willing to pay heavily for Trump's friendship, and will do or say anything to get him to nuke Iran. I was however amused to see that the Israelis, who also want to nuke Iran, aren't happy with all the weapons Trump is selling to Saudi Arabia. Honestly, if the Middle East survives Trump it will be a miracle...