Donald Trump and the Revenge of James Comey 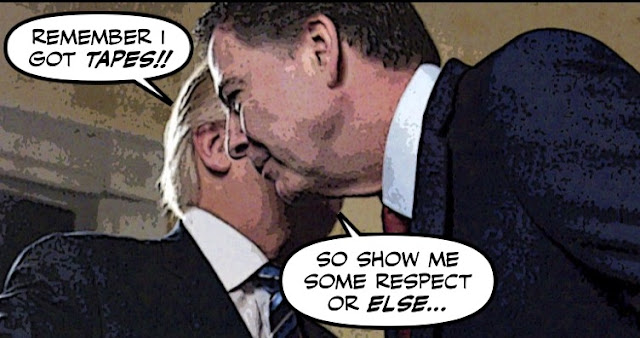 When Donald Trump fired or "terminated" James Comey so soon after blowing him a gangster kiss, hissing in his ear, and seeming to threaten him:

He must have thought he had got rid of the troublesome FBI director.

Scared him off with a horse's head, or a fish wrapped up in a newspaper.

But sadly for Boss Trump, that's not how things how things are working out.

Because now James Comey is back with a vengeance. 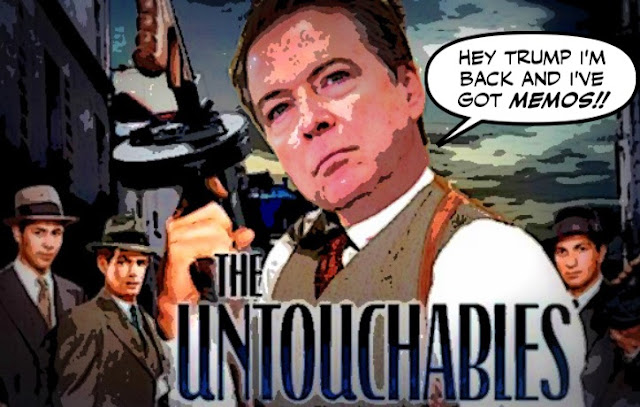 And he may have the smoking gun, or smoking memo, that could blow Trump out of the White House.

President Trump asked the F.B.I. director, James B. Comey, to shut down the federal investigation into Mr. Trump’s former national security adviser, Michael T. Flynn, in an Oval Office meeting in February, according to a memo Mr. Comey wrote shortly after the meeting.

Because that sounds a lot like obstruction of justice.

Mike Flynn is not a good guy... 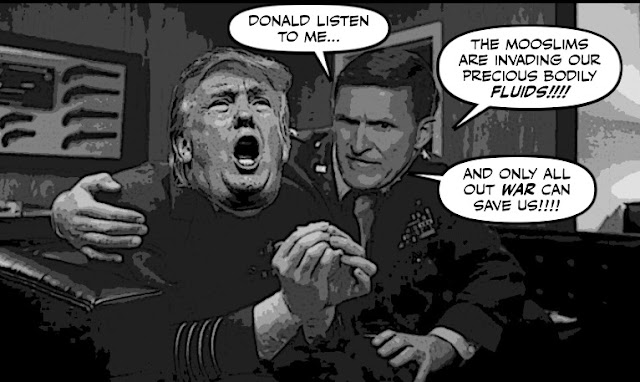 He's a raving bigot and a deranged conspiracy theorist.

This sorry spectacle is making Trump look a lot like Richard Nixon... 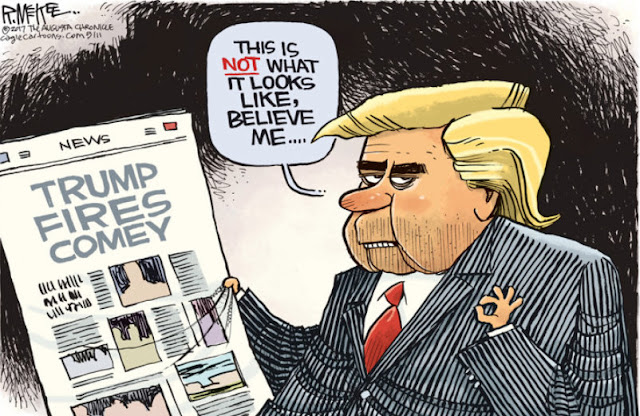 And it could also result in Trump's impeachment, or his forced resignation.

For it is his Watergate, his removal can't happen soon enough.

Trump has abused his power and perverted the functioning of the government in a way utterly inconsistent with democratic government as Americans understand it. If the FBI can be unleashed on the president’s enemies, and restrained from prosecuting his allies, then the presidency would become an instrument of authoritarian control.

And the way ahead has never seemed clearer...

Democrats must ask the Republican majority — which has so far resisted any bipartisan investigation that would grant subpoena power to the minority party — if they will subpoena Comey’s memos and any tapes that the White House has.

Any of Trump’s critics, from the left to the right, who care about safeguarding the republic should organize and join public demonstrations demanding these moves. And then, unless Comey has somehow, unimaginably, lied about the content of his memos, Trump must be impeached.

Trump was always unfit to be president.

But now this headline seems to sum it all up... 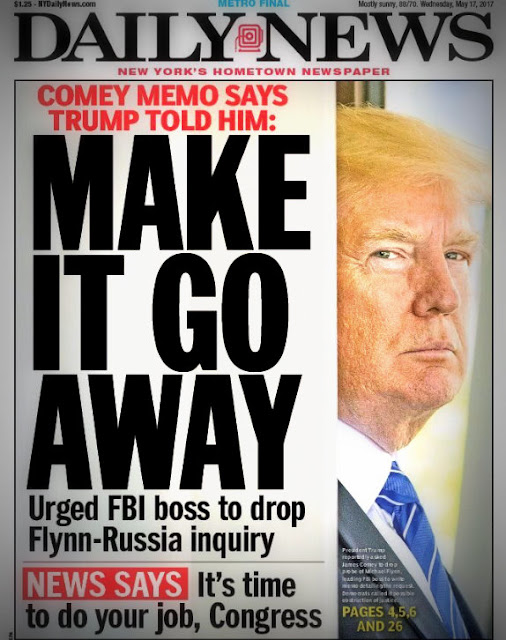 How much more can we take from that orange oaf before we too go crazy?

The nightmare has lasted long enough.

"The wicked flee when no man pursueth"

Politicians never seem to learn,"It's not the crime, stupid, it's the cover-up!".

Oops, in this case it's Trump so we cannot expect learning but still the principle holds true in general.

Not gonna happen until Dims get control over at least the House. That's the big difference between now and then - when they went after Trixie Dixie Nixie the Dims controlled Congress.

And that ain't gonna happen while "the Democratic Party has a favorability rating 11 points lower than Pence, nine points lower than Trump, and even one point lower than the GOP." Who knows what the Dims stand for, they're like a zombie party. For years they've run on the "lesser evil" platform and people have had enough of that noise.

Having ol small fingers there for a while longer may be a good idea. This week, Ryan was supposed to start punishing the poor with his budget. Not this week Paul; Trump had messed that up. The poor health for the peasants act was also supposed to cancel medicare this week. Trump messed that up. Repugnantons were to start eliminating social security and veterans benefits this week; Trump messed that up.
Having Trumps busy paralyzing congress for a year or so may lead to good things in 2018.

He mosdef ain't worth losin' it over, Simon, so just grab your popcorn, keep on pushing buttons and keep your eyes on the prize! Man's goin' down- with cement shoes. Metaphorically speaking. RICO's all over him, The Untouchables, too, not to mention the Russian Mafia and all the other crime cartels he's associated with, AND we got us a worldwideweb to unite with! Prince's Uday & Qusay will have a sad and hopefully be imprisoned, as well.

Anon@824am? You wouldn't be trying to defend the indefensible, would you? Now, dim is one thing and fired-up is quite another so you'd best prepare yourselves for the Zombie Apocalypse, k? I hear that train a comin'...

Your article is from March 9th. Try and keep up.

hi jrkrideau....I think Trump is now living in a parallel universe, and is the kind of man who cannot be restrained by others. I think he is being overwhelmed by the job, and I can't see how he can continue for much longer....

hi anon 8:24...I'm not saying that the Republicans are ready to impeach Trump tomorrow, but he is clearly worrying many of them, and if or when he becomes a drag on their chances of being re-elected many will drop him like a hot potato....

hi rumleyfips...yes, we do have to thank Trump for inadvertently sticking a fork into Paul Ryan's plans to screw the poor. And you're right, the first big test are the 2018 elections. If the Democrats can make a good impression and seize enough seats, a lot more Republicans will abandon Trump and hopefully cripple his agenda...

hi liberalandlovingit....by now I'm pretty sure that Trump is going down. I just don't know when, and if he will take the world with him...