Andrew Scheer and the Theocon Conspiracy 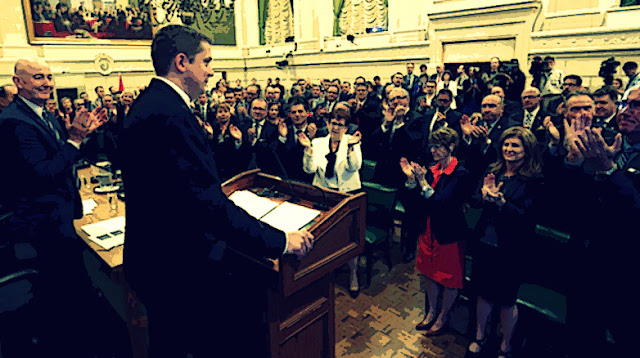 It was a bizarre sight, and a deeply disturbing one.

Andrew Scheer preparing to address his caucus for the first time as leader.

Looking like a minister about to deliver a sermon, or lead his Con flock to the Promised Land.

But still claiming that he is not a religious fanatic. 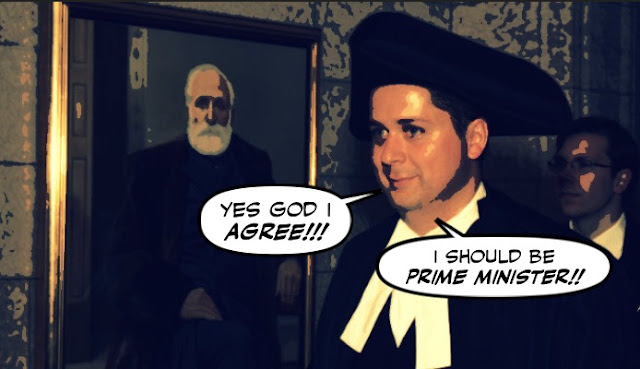 Just a man who says he wants to save Canada from the Liberal "elitists."

“The Liberals can take their cues from the cocktail circuit. We will take ours from the minivans, from the soccer fields, from the legion halls and the grocery stores.”

Or a new Harper, with a smile. Even if he sounds so much like the old one.

He pledged to recommit Canada’s air force to the fight against Daesh, also known as ISIS; repeal the Liberals’ carbon tax, and protect free speech on campuses using the threat of de-funding universities.

But what makes this bizarre spectacle even more outrageous, is the way most of our wretched right-wing media choose to ignore Scheer's theocratic tendencies.... 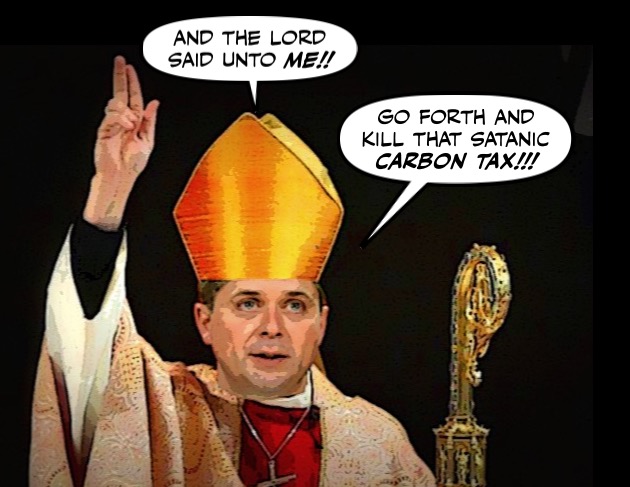 Even though they're a real problem.

Even though the Cons are now more of a cult than a political party.

And the social conservatives who helped make Scheer leader are shaking or snaking with excitement... 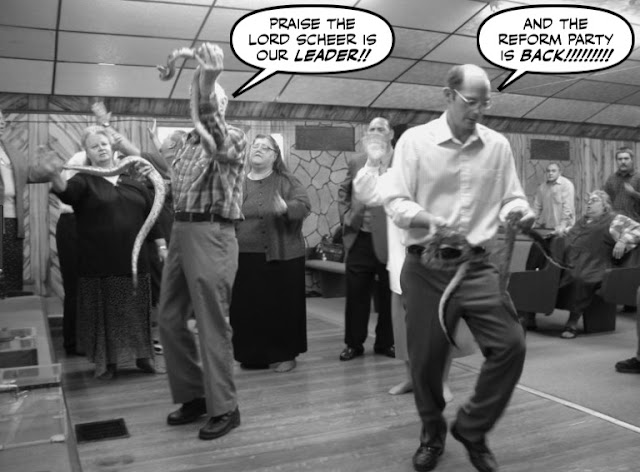 Rest assured that Christian conservatives will remind Scheer and his people – many of them right-wing Christians themselves – how much they “made the difference” at every opportunity.

Waiting to be rewarded with a shadow cabinet positions, and/or a pound of flesh or two.

While we can't be sure why Scheer is apparently trying to hide his policies.

Or whether he is getting his orders from God, the Cons, or Ezra Levant. 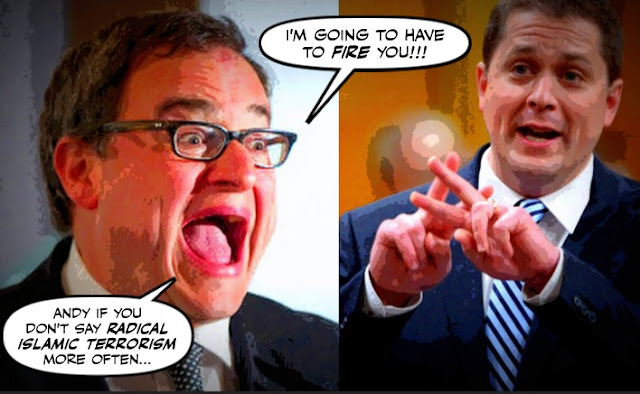 Despite a string of controversies faced by Canadian right-wing media outlet The Rebel, including allegations of downplaying the Holocaust, newly minted Conservative Party leader Andrew Scheer has so far continued to make himself available to the company that other prominent Conservative politicians have criticized for its controversial reporting and activism, and that counts his campaign manager among its directors.

But still most of our hapless media look the other way. Or as John Doyle writes, act in a manner which couldn't be more shallow or more appalling. 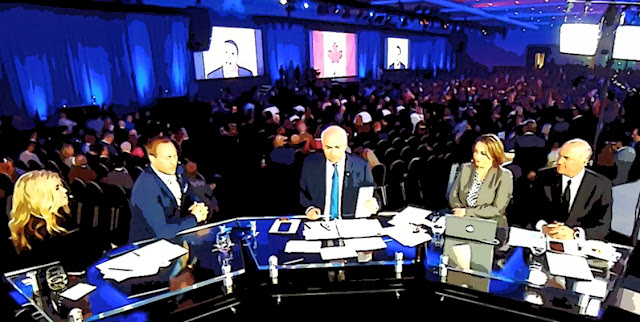 You can probably see Andrew Scheer’s grin from outer space. It’s that lustrous.

It works a charm, that grin. Certainly, on the evidence of the few hours after his shock victory at the Conservative leadership convention on Saturday, Scheer can charm and seduce big-shot TV anchors and reporters.

Minutes after he won, he joined the CBC TV coverage panel. Peter Mansbridge felt moved to put a hand on Scheer’s shoulder. Scheer did an “aw, shucks” and said, “You’re going to make me tear up, Peter,” when Mansbridge asked about the new leader’s late mom. Then Rosemary Barton got into a chuckle-fest with Scheer, suggesting he’s even sunnier than Justin Trudeau.

Licking Scheer like a lollipop, going along with his ridiculous claim that Harper's policies were good ones, but just weren't sold properly.... 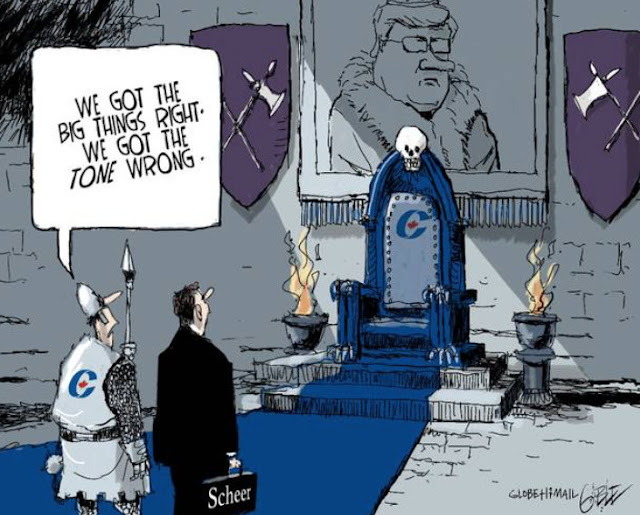 Even though the Harper years were a nightmare. Scheer, the professional politician, is only known for all the things he is against.

He was or is anti-abortion; against the legalization of marijuana; voted against the bill to legalize medically assisted dying; wants Canada to support refugees through private sponsorship instead of government sponsorship; and declared of the Civil Marriage Act, legalizing same-sex marriage, “[The bill] is abhorrent to me, to other Catholics and to every member of every faith community.”

And for millions of men and women in this country whose lives he is threatening, Scheer is the one who is abhorrent.

The Cons are going to pay for it. Big time.

They chose another Harper, with a fake smile,

And just like the other one, they will go down with him... 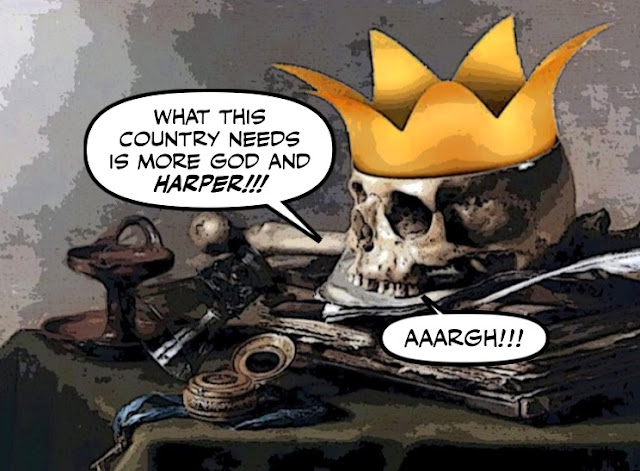 I agree with all this, but Global news did report on his ties to Rebel media less than 48 hours after he won. That is progress, we must continue to expose him and the Rebel for the shit stains that they are and save our great country from this theocratic nightmare.
Here is the Global article:
http://globalnews.ca/news/3485784/andrew-scheer-rebel-media/

I'm not too worried about the theocrats supporting Scheer. They supported Harper in a big way too despite getting the back of his hand when it came time to implement policy. Unlike the US, abortion and gay marriage are dead issues here and Canadians aren't willing to turn the clock back to the 1800s.

The middle east is full of pious, righteous political leaders that form judgemental, punitive, inflexible governments that we view with disdain. How does anyone with a rational mind justify turning the clock backwards to recombine religion and state? Of course the answer is that select Canadian religious beliefs are so superior that we are duty bound to impose them where ever we can. Sound familiar?
RT

How is Ezra not under investigation for aiding and abetting the French election interference? I see now he's in damage control mode having fired Posobiec. Libel Suit Larry just keeps pushing the envelope. Eventually he's going to get canned, and good riddance.

If I were the CDN Resistance, I'd start pressuring YouTube to drop his hate-mongering channel once and for all. Let him spew his fake-news conspiratorial garbage in some other roach motel of the Internet. YouTube is under no obligation to host his crap.

You seem to forget the Liberal Party was opposed to gay marriage right through the 1990's.

Rebel Rebel, he is the fat white duke

So? What's your point? Times change and so do party policies. The Supreme Court's decision in R v Morgentaler has been the law of the land since 1988; the Reference re Same-Sex Marriage since 2004. We aren't going back despite the fervent hopes of the 4,000 loons who showed up a few weeks ago for the March for Lies on Parliament Hill - the smallest showing in the history of the event.

Love this post. And agree that Scheer is another Christofascist: love for Israel, killing Muslims with Crusades, anti-abortion (pro-life but pro-death and torture like a good Christian), Christian school funding, forcing Universities to accommodate Alt-Right and Anti-Choice fanatics. Plus any ties to Ezra and you're in the loony tunes area now!

Another far left blogger calling the conservatives (probs 40% of Canada) racist Christian fascists. Andrew Scheer will legalize Marijuana, probably inspired by Max Bernier, he won't repeal gay marriage, will force government funded universities to not discriminate against anybody they disagree with, fighting isis, he is great. Much better than Trudeau, who is killing the middle class with taxes instead of killing isis, and threatening a trade war with our biggest trading partner because it's democratically elected president offends him. But lemme guess, you support NDP?

We need sites like this to counter the Ontario Proud which is now setting it's sights on Trudeau. Do you have a FB page?