Trump University and the Dawn of the Donald 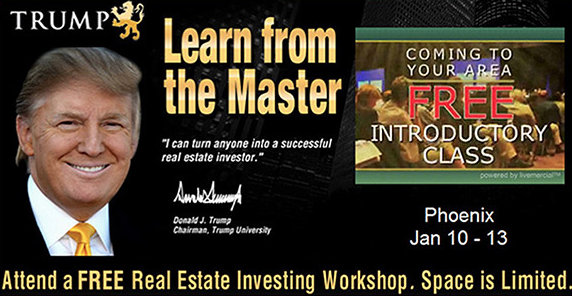 Once upon a time Donald Trump claimed that his Trump University could make anyone as rich as he was, and that all could learn from the Master.

Until after only five years it collapsed under an avalanche of lawsuits, from those who claimed it was just a shabby scam and that Trump was a con artist.

But despite all the evidence against him, the Angry Orange spent the next six years fighting those claims in court, and among other things calling the judge a Mexican even though he was born in Indiana.

Only to finally surrender yesterday. 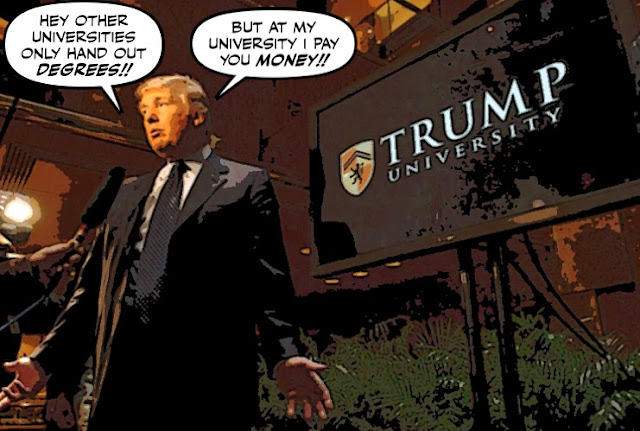 And fork over $25 million to his many victims.

Donald J. Trump has reversed course and agreed on Friday to pay $25 million to settle a series of lawsuits stemming from his defunct for-profit education venture, Trump University, finally putting to rest fraud allegations by former students, which have dogged him for years and hampered his presidential campaign.

Even though he had called those who settle lawsuits that way LOSERS.

“It’s something I could have settled many times,” Mr. Trump said during a debate in February. “I could settle it right now for very little money, but I don’t want to do it out of principle.”

And although his lawyers bragged that Trump never admitted fault, when you have to pay out $25 million, in the eyes of most sane people you are guilty, you are a con artist,  and you are a LOSER.

But whatever you do don't call him one to his face, because thanks to equally brutish and racist daddy Fred, it's the one word that drives him CRAAAAAZY.

As even poor Obama found out to his everlasting regret...

And yes, mommy mommy indeed, now we're stuck with Trump for the next four years.

Or until his deplorable supporters discover that he is just an old con artist, who can't deliver on most of the wild promises he made during his deranged campaign, turn on him like wild beasts.

And join the rest of us in demanding that he be sent to the place where he belongs... 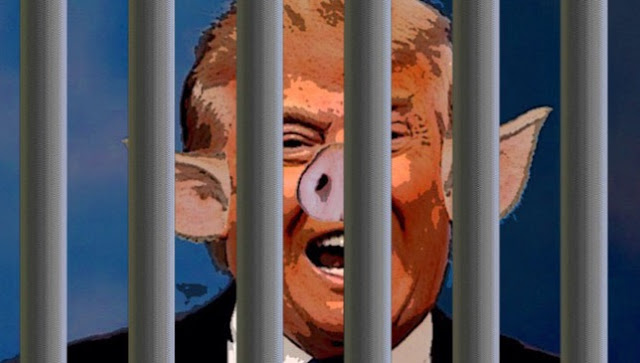 For his presidency is the biggest scam in American history, and although it is a nightmare story.

We will have fun mocking him.

And I'm absolutely convinced that it will have a happy ending...

Once the MAGA development project is complete he probably has plans to franchise his blueprints to other countries wishing to do the same.When you are great you are really GREAT!Those that think otherwise are losers.
RT

25 million eh? You're right it's not his style. Looks like he's trying to tie up some loose ends before January rolls around.

Proverbs 26: 12
Do you see a person wise in their own eyes? There is more hope for a fool than for them.

*
How many of these these 7 things can be associated with Trump?

No anon, he's trying to find a way out of a RICO ( jailtime ) conviction .

Now about those tax auditors who approved the ingenious bankruptcy scheme that left the creditors holding the near empty bag while he fulfilled his fiduciary responsibility to himself and pocketed the credits ...

"Trump avoided reporting hundreds of millions of dollars in taxable income by using a tax avoidance maneuver so legally dubious his own lawyers advised him that the Internal Revenue Service would most likely declare it improper if he were audited. ...

“'Whatever loophole existed was not "exploited" here, but stretched beyond any recognition,' said Steven M. Rosenthal, a senior fellow at the nonpartisan Tax Policy Center who helped draft tax legislation in the early 1990s."

Heard any bragging about hiring the smartest "lobbyists" lately?