Hillary Clinton and the Republican War on Women 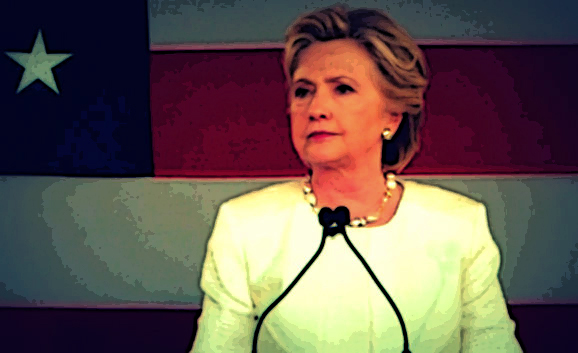 When I watched Hillary Clinton campaigning yesterday, I was impressed by the angry defiant look on her face.

And by the fact that she's still standing. For it has been a brutal week.

She has been stabbed not once but twice in the back by the FBI.

A rise in Obamacare premiums has given Donald Trump another weapon to use against her.


And while most polls still show Clinton ahead.

She must be hearing Trump's heavy breathing behind her... 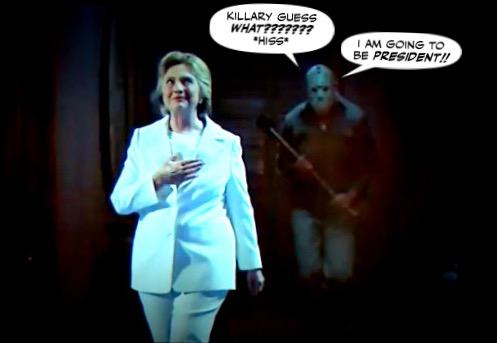 So I'm glad she's decided to ignore the FBI's outrageous attempt to rig the election.

And is going after the monstrous misogynist.

Hillary Clinton moved on Tuesday to return the nation’s focus to the character and behavior of Donald J. Trump, hoping to define the presidential race again as a referendum on her opponent after spending days in open conflict with the F.B.I.

And focusing again on the grotesque way he treats women.

Because naked misogyny has always been at the heart of the Trump campaign.

Three political scientists who studied the connection between sexism, emotions, and support for Trump found that the more hostile voters were toward women, the more likely they were to support Trump.

Wayne, Valentino, and Oceno’s research, conducted in June, found hostility toward women was a major factor, predicting support for Trump more strongly than authoritarian attitudes and about as well as racial prejudice.

And many of his supporters don't just hate the idea of a woman president. They fear and loathe feminism and feminists.

Trump, in other words, isn’t just drawing from a base of people who have traditional views about women’s roles. He’s getting support from people who are hostile toward women’s economic and legal equality and who think feminism is making America worse.

And since for many Republicans Hillary Clinton is the satanic symbol of feminism, they have been demonizing her for decades. 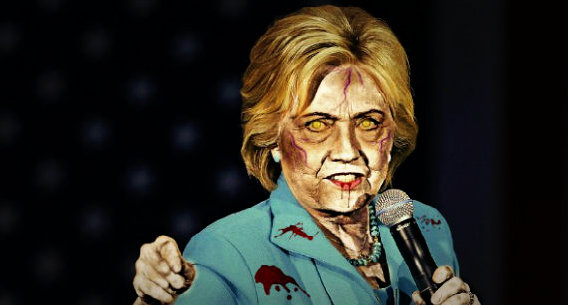 One of the mysteries of 2016 is the degree to which Hillary Clinton is reviled. Not just rationally opposed but viscerally and instinctively hated. None of the stated reasons for the animus seem to satisfy.

Yet she’s cast not just as a political combatant but as a demon who, in the imaginings of Republicans like Paul D. Ryan, the speaker of the House, and Representative Trent Franks, would create an America “where passion — the very stuff of life — is extinguished” (the former) and where fetuses would be destroyed “limb from limb” (the latter).

And this election is just the climactic battle of the Republican's long war on Clinton, and women.

Because that's who they are, and so is this. 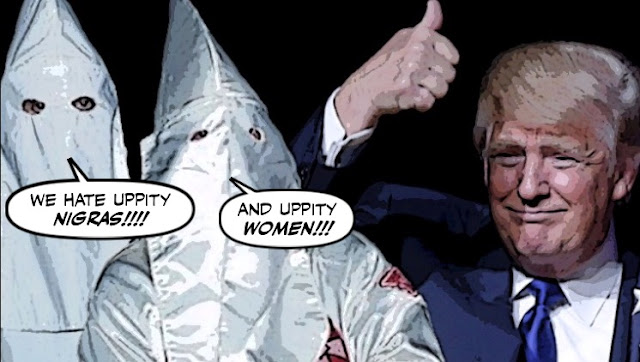 And their satanic bigot leader couldn't be less fit to be president of the United States.

And the good news? Clinton's troubles have energized her base to an incredible degree.

And by making the war on women her main weapon against Trump, she will not only motivate more millennials to get off their asses and vote, not necessarily for her but for women's rights.

She is sure to make many disaffected Republicans question their support for Trump, and wonder whether they should vote for Hillary, or stay at home.

By asking them all the same question:

Do you really want a sexual predator for a president?

Yup, with just six day to go we're in for quite a battle.

But I'm still pretty confident that the decent women of America, and their male supporters will prevail.

The Republicans will lose the election, and the war on women.

And the monstrous porculus will be defeated... 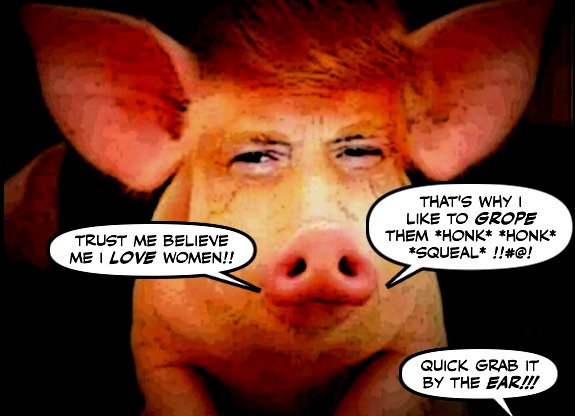 Trump fills up stadiums with supporters, Hillary can't fill up a small high school gymnasium. The polls are rigged, Trump will be the next prez.

nah
... you can fool some people sometimes but those dummies are mostly voting for thedonald, so who cares about them, really. (ok, we care a bit but that's only because they have pitchforks).
most people can't be fooled all the time. Clinton's had this since before thedonald's wall.

We know Trump should be disqualified from being President - no need to repeat the reasons why.

But so should Hillary - the woman (Lee-Anne Walters) whose debate question was leaked by Donna Brazile to Hillary said: " ... she was “disgusted” by Clinton’s answer at the time and “even more so” once she learned she already had her question, adding that she “should be disqualified because she had had an advantage she shouldn’t have had.”

Note that the head of CNN, Zucker, had already publicly said that he was disgusted with the leak and that CNN had already parted company with Donna Brazile, meaning that CNN believed she had committed the leak to Hillary.

If we are caught cheating in our high school/college exams., we know what would happen. So you would condone cheating to stop Trump?

anon 11:43 I consider the hallmark of a banana republic to be the type of government one has. If you elect Trump, I think that is a big first step on the way there. There is a lot of rumor over the criminality of Hillary, but what evidences do you have, beyond rumor and innuendo that she has broken the law? In the same fashion, What evidences do you have that Trump is even a successful businessman, beyond rumor and supposition, considering he is refusing to release any financial information due to various court cases? ~GS

From the Podesta email files, here's an article that looks at how easy it is to rig political polls in the United States:

All is fair in American politics.

So you would condone cheating to stop Trump?

exactly
and may i add that thedonald's propensity to pedophilia, his sexually predatorial behaviour, active and boastful promotion and perpetuation of rape culture and the abuse of his social and economic power in relation to young women should be investigated without leaving a stone unturned, perspective unexplored.

of course, clinton's secrecy sucks. why debate? but in a healthy democracy, there are always venues and strategies with which people keep check on the government. if it lies, an alert community will spot it and call it.
is emerika an alert community? i dont know. what i do know is that under trump, the word 'democracy' must be left out of any political equation.

who else knows a world without democracy?
decades of drab tuesdays, the unseen footsteps behind you? nagging.

If tomorrow Trump's daughter Ivanka held a press conference and said she is taking her father to court for raping her numerous times since she was a teenager ..... 99% of Trump supporters would still vote for him because they hate Hillary so much. Trump has these people brainwashed. Both men and women who are Trump supporters have been photographed wearing "Trump That Bitch" T- shirts at his rallies. Sad.

hi anon...It's true that Trump has been getting good crowds, but so has Clinton. All those polls hat still show Clinton ahead can't be rigged. And remember, the Democrats have a better ground game, and in a tight race that could make all the difference

hi anon...yes i was slightly shocked to see good old Donna Brazile kicked off CNN for cheating. This election really has corrupted everyone. But in the grand scheme of things that is a small thing, an Clinton's flaws pale into insignificance when compared to all of Trump's far more serious failings.
And no, I wouldn't condone cheating to stop Trump, But the Democrats aren't the ones who are being accused of gerrymandering electoral boundaries, and trying to suppress the vote...

hi political junkie....yes, there is no doubt that the American political system is corrupted from top to bottom. Too much big money flying around and too much influence peddling. And when you build a rotten stage, and you write a lousy script, and the TV networks treat it like infotainment, nobody should be surprised that the show is so rotten. I believe Clinton has made some noises about trying to clean up the system. For their sake and our sake the sooner the better....

hi anon...that makes absolutely no sense when Bernie is asking his supporters to vote for Hillary. And besides if they drain the swamp where would Trump Pepe live? ;)

hi David....you know in a normal society, the day Trump claimed he could shoot someone in the street and get away with it, should have been the end of his political career. But as you say, his supporters don't care because they hate Hillary with a passion that borders on insanity. That kind of fanaticism and hate can very easily lead to racism, and you know what happens to those who don't learn from the past....

@Luce Forma: Since you would condone cheating to win, why stop with debates? Why not then commit voter and electoral fraud to beat Trump if the end justifies the means for you? :)
@Simon: Glad to hear that you would not condone cheating to beat Trump because then there would be no difference between Hillary cheating to win and Trump cheating on his taxes. Also, "winning" debates is rather easy when you know the questions ahead of time, no? You must be aware that electoral and voter fraud are being committed by BOTH parties. Here is a good discussion to start (electoral and voter fraud are mentioned even though it was not the main topic): https://www.rt.com/shows/crosstalk/365048-clinton-scandals-fbi-investigation/