Donald Trump and the Zombie Apocalypse

I spent most of yesterday trying to ignore the U.S. election for a day, by staying off the internet, reducing my exposure to CNN to three minutes at the most etc etc.

So I might have a fighting chance of making it to next Tuesday, without going crazy.

But sadly it just didn't work. Not when Donald Trump's zombies are within striking distance of the presidency, and most of the world is holding its breath...or whatever.

Naturally, the rest of the human race is on the edge of its seat right now. Pop a weather balloon over the Western hemisphere and half the world will pee itself. Small island nations will be flooded.

And not when for a moment I thought that somebody had tried to kill Trump.


But while I was greatly relieved to discover that he had only been running from a guy with a Republicans Against Trump sign.

The man whose protest saw Donald Trump rushed off the stage by Secret Service agents has said the Republican nominee’s supporters turned on him when he held up a sign reading: “Republicans against Trump”,

The 33-year-old – who says he has been a registered Republican for about six years – said he was kicked, punched and choked, and feared for his life when the crowd turned on him at the gathering in Reno, Nevada.

What I found deeply disturbing was to see how those violent Trump zombies were trying to claim that it's the left that is violent... .

Like former Republican congressman Joe Walsh was trying to do yesterday.

Only ten days after he tweeted this... 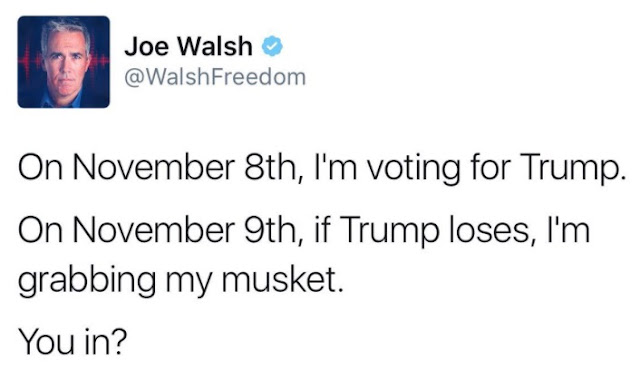 Which can only add to the atmosphere of violence, and makes it even more obvious that those Trumplings are not just crazy, they're dangerous. 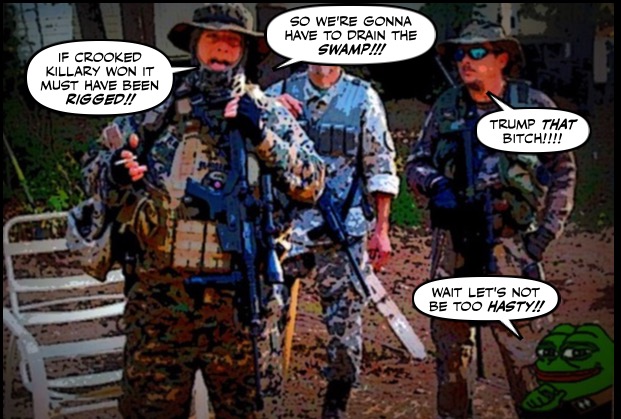 Donald Trump's legions of followers say they're growing confident of victory -- and many say they won't accept defeat. "We're going to win.

And if we don't win and Hillary wins, I think we're going to take over the government," said Nancy Fraize, 51, who works as a cleaning lady in Manchester, New Hampshire. "I think personally we'll all be at the White House sitting on the front lawn. In arms."

But despite all of that, what alarmed me the most about that fake security scare in Reno is that the time to knock some sense into Donald Trump came and went along time ago.


And while I too could watch that for hours, I don't want to see Trump hurt. I want to see him humiliated.

And that's exactly what might happen. He could be humiliated by the people he first attacked, the Latinos of America.

Hispanic voters in key states surged to cast their ballots in the final days of early voting this weekend, a demonstration of political power that lifted Hillary Clinton’s presidential hopes and threatened to block Donald J. Trump’s path to the White House.

“The story of this election may be the mobilization of the Hispanic vote,” said Senator Lindsey Graham of South Carolina, an anti-Trump Republican who has pleaded with his party to do more to win over Latinos. “So Trump deserves the award for Hispanic turnout. He did more to get them out than any Democrat has ever done.”

And wouldn't that be poetic justice?

And the even better news? Trump's zombie surge has energized the Democrats like nothing else could.

The mighty Clinton machine is making its presence felt all over the U.S., with almost a million volunteers now knocking on doors and working to get out the vote.

Bernie Sanders is doing his part to remind his young followers what's at stake.

And videos like this one are blanketing the airwaves...

For respect.
For the future.
For our planet.


The good people of America are rising.

On Tuesday the whole world will hear them roar.

And with a little bit of luck the monstrous Trump zombie will sniffle and hiss.

But will be defeated, and humiliated.

And threaten us no more...

Labels: Donald Trump, The Madness of Trump, The Race for the White House, Zombie Apocalypse

If the minorities and the young get out and vote, the big orange rectum will be easily defeated. That's how we destroyed Harper and that's how they can destroy Trump.
JD

I've been hearing this "destroy" talk for almost a year now.

Scroll down. Estelle Davis... This is what you're fighting for? I find it very sad that who our society in general equals "values" to is screaming crybaby outrage addicts from the far left.

That is a gay man with blue hair and lipstick (which is fine). That is not a woman. No matter what the Canadian Brainwashing Corp says.

The reason many people are supporting Trump is because they're sick and tired of have this politically correct BS jammed down our throats. You should have just left us alone. "Progressive" rhetoric has turned regular people into right wingers to the point where you got a guy like Trump almost elected to president.

good god!
1. destroy? you don't say!
2. Estelle Davis is a name of a proud woman. you are nameless.
3. the reason why people support trump is because they are intolerant of things messed up in a differently than them. much like you, anonymous (≠ Anonymous).
4. get back on your meds or get off them... but get your clarity back
5. and, please, please, go vomit elsewhere.
cheers, lf

In spite of what you would like to believe, things are not simply black and white - right and wrong - left and right. It is many shades of grey. Life's like that.

Now that Trump has had his "Bob Roberts Moment", what's next? Giuliani seems to have become as quiet as the "unidentified individual".

If the minorities and the young get out and vote
----
so you're ok if non-minorities and middle aged people correctly identify you as an enemy and treat you as such ? One of the great things about the Trump campaign is the reawakening of white identity in the usa. At last, more and more white people are realizing that "minorities" do want to shut them down and are not ashamed to admit it online, in universities, in the media, etc. At last, some white people are beginning to identify who is working very hard against their interests. Keep blaming everything wrong on "cishet white males". Keep reminding them that they do form a group. When their group consciousness reawakens you won't like it but too bad for you guys. Soon in the usa and hopefully soon after in the rest of the western world.
- ogunsiron

Someone one said that "predictions are difficult especially about the future" so I will refrain from a definitive prediction but now that the email scandal seems to have dissipated as fast as it arrived it certainly looks like Hillary has the upper hand. Comey has now stated, nothing to see here folks move along. A suspicious person might think the original story was planted to prevent a Trump trouncing which could have spilled over into a loss of the senate but was reversed by the Con elite just in time to prevent a Trump win...tight rope walking at its best!
Also Mr. Market only has a slight case of the jitters, nowhere near the spasms associated with a possible Trump win. Therefore as of tonight Trumpland seems to sit on a very distant horizon somewhat like a mirage or bad dream... but predictions are just that.

Trying to visualize Trumpland is enough to give any thinking person the shakes. Trump is like a barroom fighter with no rules, you can knock him down but be careful he doesn't bounce back up and gouge out an eye with a broken bottle. Its difficult to determine what his true motivation is other than winning and self ingratiation but I suspect that his numerous business tussles with the US government and other litigants showed him a systemic weakness and lead him to believe he could do better in the top job while wrecking some revenge at the same time. His motivation has nothing to do with a sudden epiphany about improving the lot of downtrodden people. Like a broken bottle they are just an expedient tool to be used until he can get his hands on a more sophisticated weapon. He has no affinity for followers and people who couldn't connect two dots together even if they fell into a field full of them. At some point keeping impossible promises would become a burden unless he can re purpose them but they are an unruly lot with inflexible ingrained biases. Probably only useful for mob action during the early months of reshaping the empire.
Hilary on the other hand is a seasoned politician that just might keep the ship upright until a new crew can repair the damage at some point in the future. Her biggest problem ( the worlds) is that she is a cold war warrior bent on playing a global chess game. Unfortunately every move and counter move compounds the amount of death and destruction and takes us further down a dead end road. Also this type of insane game playing leaves the door open to a small number of subordinates conspiring to nuke a few million people or trigger WW3. Why would any sane person do that? Why would a pilot deliberately crash and kill a few hundred people ... because they are not and they have been entrusted with enough power to enable them..
All we can do is embrace the lesser of two evils for the time being and work for a better future.
RT

I hope Malcolm Gladwell is right: that Trump will be in jail within a year:

hi JD...I'm pretty sure most minorities will turn out to vote in large numbers, but some young Americans, African Americans and Bernie supporters are still threatening to vote for a third party or not vote at all. Fortunately the Democratic machine is going after them big time, so hopefully most of them will end up supporting Hillary Clinton....

hi anon 2:31...tell me something, why are so many Cons so obsessed with the sex lives of other people? Why don't they just mind their own business like normal people do? Human rights are not BS, and nobody is shoving them down your throats.
And if that's what Trump, who is in no position to lecture anybody about sexual morals, is all about. Then it is yet another reason he is unfit to be president. Try to be a nicer person, for it will make you a happier one...

hi John...I don't know what's next. Trump now seems to be claims that the FBI is biased, after praising it extravagantly for days. But as for Giuliani the situation couldn't be more hilarious. He's now running from that FBI leak story as fast as he can, and looking as desperate as I have ever seen him. It's a small consolation, but it's something... ;)

hi anon...I'm white and I don't feel threatened or feel the need to be superior to anyone. And I believe diversity makes us stronger not weaker....

hi RT...I think you summed up the situation excellently as usual. Hillary Clinton is flawed but infinitely better than that screaming bigot Trump. And as for her war like tendencies, I'm pretty sure she must have learned something from the many failures or catastrophes of the past. And there is always Bernie and his young army to help keep her honest....

hi David...yes I saw that, and needless to say I fervently wish Gladwell's prediction comes true. ... ;)

Luce if you think that is a man you're the one off your meds. Most of your posts don't even make sense it's just verbal diarea. Lay off the drugs.