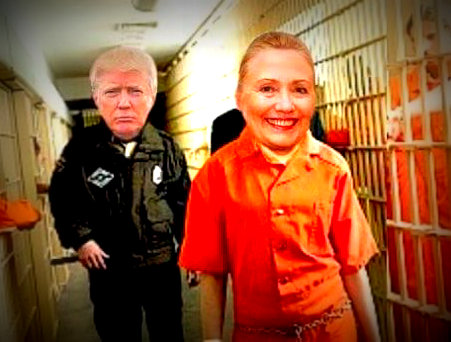 Donald Trump spent every day of his long campaign for the presidency demonizing Hillary Clinton and calling her a criminal.

He vowed that one of his first acts if he was elected would be to appoint a special prosecutor to go after her and jail her.

While his rabid supporters chanted "lock her up, lock her up."

But yesterday while having lunch at the New York Times, Trump seemed to change his mind. 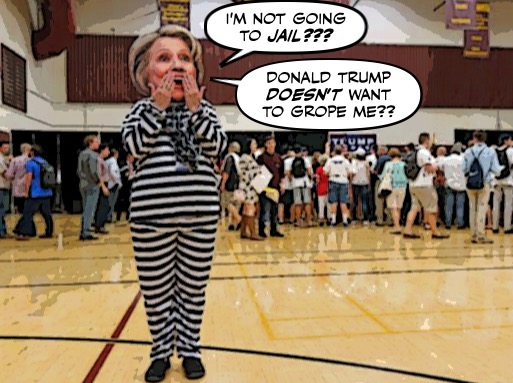 And now he says he won't go after Clinton.

President-elect Donald J. Trump said on Tuesday that he had no intention of pressing for an investigation into Hillary Clinton’s use of a private email server or the financial operations of her family’s foundation, dropping the “lock her up” pledge that became a rallying cry for his campaign for the White House.

“I don’t want to hurt the Clintons, I really don’t,” Mr. Trump said during the interview. “She went through a lot and suffered greatly in many different ways, and I am not looking to hurt them at all. The campaign was vicious.”

And needless to say over at Breitbart, the home of Trump's "alt-right" guru Steve Bannon, they're not happy. 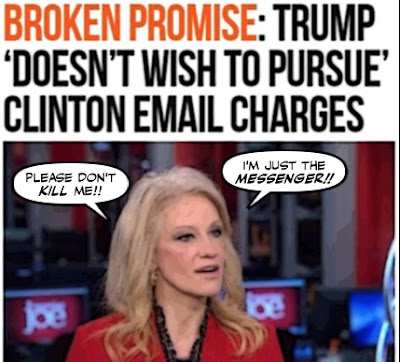 Because they want her head on a platter, or a stick... 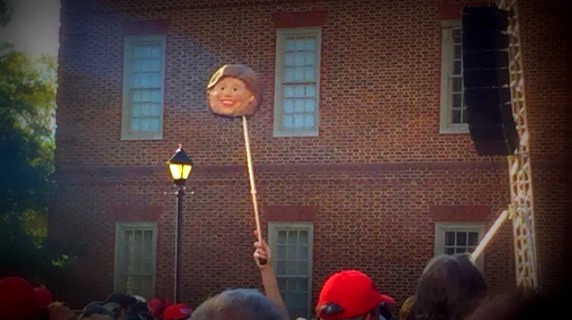 And if their orange Messiah doesn't deliver it, they'll soon be demanding HIS head.

But what I found most interesting about his visit to the New York Times, was how Trump can switch so easily from the monstrous Mr Hyde to an almost kinder gentler Dr Jekyll... 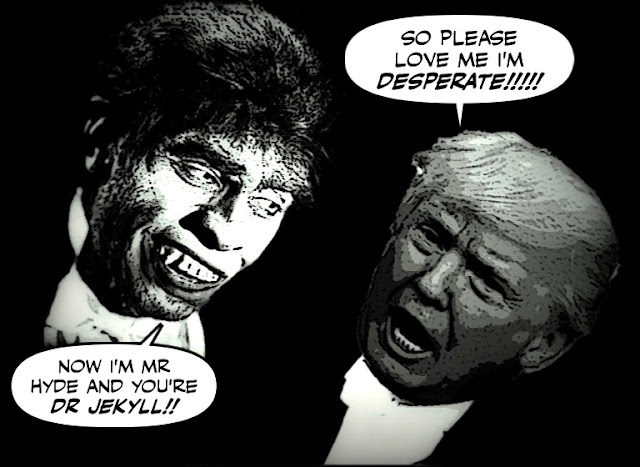 Which can only be explained, as Frank Bruni who got to witness his transformation yesterday points out, by his compulsive need or consuming demand to be loved.

“I’m going to get you to write some good stuff about me,” Donald Trump said.

It’s entirely possible. I keep an open mind. But I’m decided on this much: Winning the most powerful office in the world did nothing to diminish his epic ache for adoration or outsize need to tell everyone how much he deserves it.

Which as I pointed out the other day, probably comes from the way he was treated as a boy by his brutish father Fred... 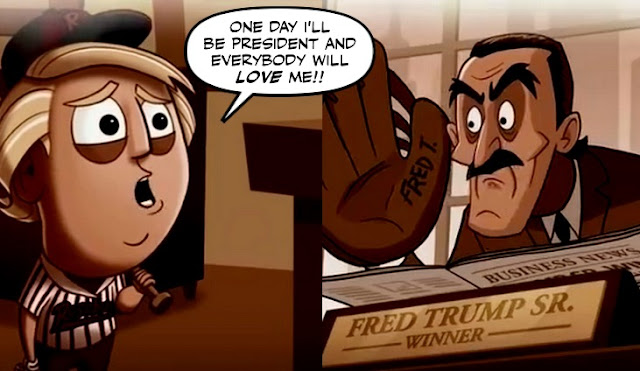 But it does explain why Trump will say anything to bask in the roar of the adoring mob. And how he can change or tone down his message to try to get others to love him.

For Trump, bragging is like breathing: continuous, spontaneous. He wants nothing more than for his audience to be impressed. And when his audience is a group of people, like us, who haven’t clapped the way he’d like? He sands down his edges. Modulates his voice. Bends.

And for progressives in the U.S. it does raise an interesting question about how he should be treated.

That was perhaps the most interesting part of the meeting, the one that makes his presidency such a question mark. Will he tilt in whatever direction, and toward whichever constituency, is the surest source of applause? Is our best hope for the best Trump to be so fantastically adulatory when he’s reasonable that he’s motivated to stay on that course, lest the adulation wane?

Should they give him the love he craves so desperately to try to keep him as reasonable as he can be, and as far away from the nuclear button as possible?

Or should he be greeted by boos everywhere he goes, like he was yesterday by the public in the lobby of the New York Times?

As for me, I'm with Bernie Sanders. I think progressives should encourage the leathery orange to do things like scrapping the TPP.

While making it clear that the bigotry he has incited will earn him no love at all...

Could love trump hate AND Trump? Maybe. He is that vulnerable.

But only as long as everyone remembers that if he can be the good Dr Jekyll one day.

He can be the monstrous Mr Hyde the other... 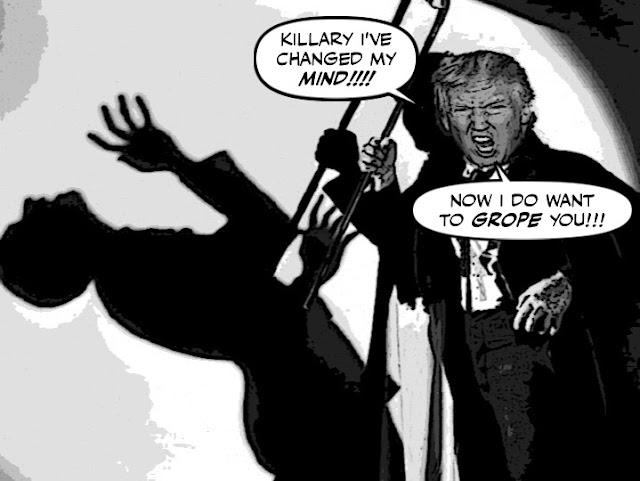 It may be that Trump is one of those personalities which is as good as the last person he spoke to. He is also a sales person and to make the sale he will say whatever the "audience"/customer wants to hear. I doubt if it has anything to do with being like/loved one way or the other.

When he met with the New York Times he played to their expectations and he made the sale. What we need to look at is who he appoints to cabinet.

Last evening Trevour Noah, the Daily Show, did an absolutely fun piece coming statements by Trump to the statements of the president of South Africa. It was funny and scary all at the same time. Its worth watching. Of course the summation was very interesting Mr. Noah, pointed out the President of South Africa can't manipulate the justice system by appointing Judges he wants, which of course the President of the U.S.A. can do. He pointed out the children of the South African president have been making out like bandits with their "family" businesses which have cost the country a fortune.

Loved Trump's comments about he can't be in a conflict of interest as president. Guess he is telling everyone he did business with, he and his are open for business. Just watch how many foreign corporations and diplomats start using their resorts and hotels. For all we know his run for the presidency was so he could fill his hotel rooms down the street from the White House.

I can't get over, the political hacks on tv who are trying to figure out whether Trump will be a good, effective, open, intelligent leader because of some appointment, tweet or Meeting he has shown up at. They elected a fucking game show host for Christ sake. At this rate his presidency will be considered a success if he doesn't launch nukes. Stupid Americans.

Word on the street is Trump's saying he's not going to prosecute her because Obama will just pardon her right now. Once Trump becomes prez then he'll proceed with charges against her.

The flip from "lock her up" to "the Clintons are basically good people" is classic Trump.As with most things Trump the motive for outlandish comments could always be the same or tailored to the circumstances. In this case the "lock her up strategy" did its job but now there is more downside in pursuing it further versus issuing a "generous" pardon. Continuing would have reinforced counter pressure to lock him up first for a wide range of potential charges as well as increase focus and pressure to divest his business dealings into a true blind trust or sell them. Not good from a business or personal perspective.Although breaking his promise is a slap in the face to his true zombie supporters/suckers its good politics as it also opens the door to more new supporters who want to believe that the Trumpster is a good rational guy after all. Time will tell but love has nothing to do with it; its strictly business.
RT

I wonder if Bernie is feeling the burn yet. Used and abused by the DNC then his party destroyed by old stock Americans. Sad! #MAGA

Trump may go back and forth on the investigations of the Clintons in an effort to keep his base happy and/or if the Clintons do have something to hide, keep them in line.

It is doubtful he will pursue much of anything. They news has reported he has only participated in 2 national security briefings. I would suggest the guy is bi polar.

hi Willy...I know, I can't watch CNN any more. I find any attempt to normalize Trump mind-blowing, deeply disturbing, and absolute insanity. I realize that we're in the grip of some mighty historical forces, but madness is madness. It's like the story about the Emperor with no clothes, except this one has his twitchy little fingers in range of the nuclear button. Nobody can predict what Trump might do, but you can be sure it will be a horror show. And I must shamefully admit that I too would consider Trump's presidency a success, if we can get out of this one alive... ;)

hi MC...you really must stop getting your information from sites like Breitbart or god forbid the Rebel. First of all it's not up to Trump to prosecute anyone. It's up to the FBI or other law enforcement agencies. Secondly, how could Obama pardon Clinton before she is even charged? It makes no sense, and neither does Trump. He knows that Hillary got almost two million votes more than he did, and he's scared of her...

hi RT...yes, at this stage Trump can afford to annoy some of his most rabid supporters, in the hope of enlarging his circus tent. But I still think Frank Bruni is right when he writes about Trump's overwhelming need to be admired and loved. Others have pointed that about him as well. Which while it is a common human trait, a president who can too easily be flattered, can also be too easily manipulated by others...

hi MC...I can't understand why a Canadian should chant Trump's American slogans. Bur since you ask Bernie's doing very well. He's just released a book called Our Revolution, and his followers are busy trying to take over the Democratic Party. And must I remind you again? The Democrats are not destroyed, and Clinton got two million votes more than Trump did...

hi e.a.f...we better hope that Trump is not bipolar, or that he is not suffering from the first symptoms of early onset Alzheimers. He's already clearly unfit for the job, and anything more could only limit our chances of surviving his rule...

hi e.a.f...Trump wants to be admire by everyone, and will say what he thinks they want to hear. But powerful leaders with an obsessive need to be admired and loved can be dangerous. When they are flattered, and especially when they are not. Trump's statement that a president can't be in a conflict of interest, tells me that he has no idea what it takes to be a president, and all of this can only lead him into trouble...