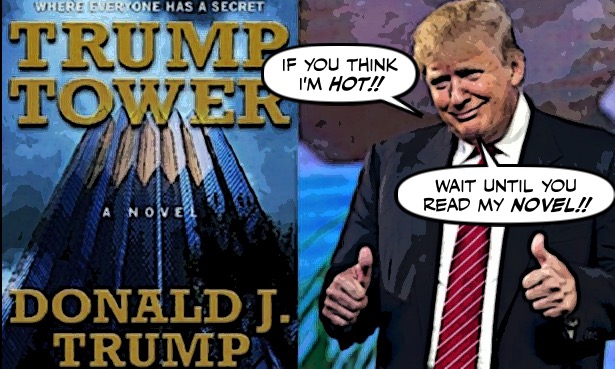 In Los Angeles yesterday, a woman who claims that Donald Trump raped her when she was thirteen, was supposed to hold a news conference.

But it was cancelled at the last minute after her lawyer said her life had been threatened and she was living in fear.

A woman who accuses Donald Trump of raping her when she was just 13 has pulled out of a press conference after allegedly receiving death threats. The woman, identified only as Jane Doe, alleges that Trump raped her at a party in 1994.

And while we can't know at this point who is telling the truth, Trump is a serial liar and a sexual predator.

And I find this deeply disturbing. 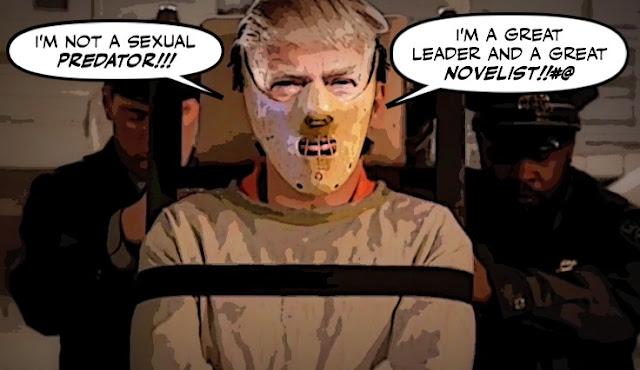 During the course of this savage sexual attack, Plaintiff loudly pleaded with Defendant Trump to stop but with no effect. Defendant Trump responded to Plaintiff’s pleas by violently striking Plaintiff in the face with his open hand and screaming that he would do whatever he wanted.

The creepy similarity between what Jane Doe claims Trump did to her.

And this paragraph in the first chapter of Trump's smutty novel. 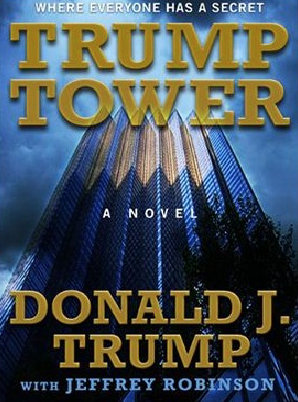 There she was, completely naked and gagged, her arms above her head, handcuffed to the top of the bedstead, with her legs tied to the bed and stretched wide apart.

But this is so Donald.

“I’d probably like his mama’s titties, too,” and, instead of using his key, he rang the bell. 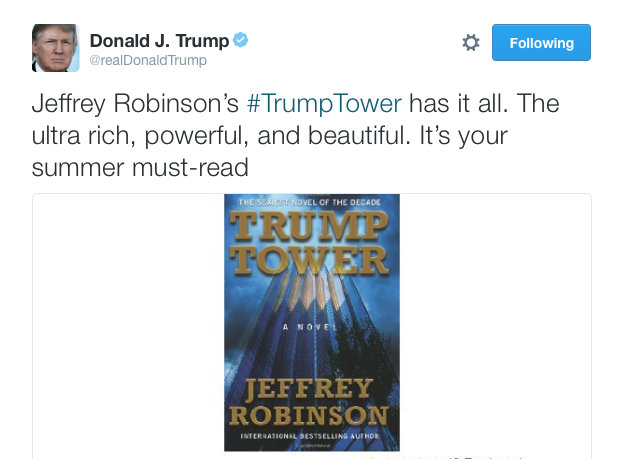 Makes me question his judgement. Again.

Or like Tony Schwartz, the ghostwriter of Trump's book the Art of the Deal, asked  himself last night...

Could that nightmare really happen?

And the answer is yes it could, anything could happen now.

Even though there are so many reasons Trump shouldn't get anywhere near the White House .

From tonight’s #ACloserLook: How could anyone choose between Trump and Clinton? pic.twitter.com/lUc6pVY3D5
— Late Night (@LateNightSeth) November 3, 2016


And let's not forget that at a rally yesterday, Trump apparently claimed that if he was president he would stop the Chinese from getting nuclear weapons.

Which would be news to the Chinese who have had them since 1964...

Which is really scary, and is yet another reason Trump shouldn't be allowed anywhere near the nuclear button.

And here's the even scarier news, if that's possible.

With just five days to go the biggest problem the Democrats face is apparently motivating some of their young and black supporters to go vote for Hillary Clinton, instead of staying at home.

Because in their precious little minds Clinton is just as bad, or worse than Trump.

Let's pray the Democrats can get them to see the light. Or the blinding flash of reason.

And his belligerent ignorance kills us all... 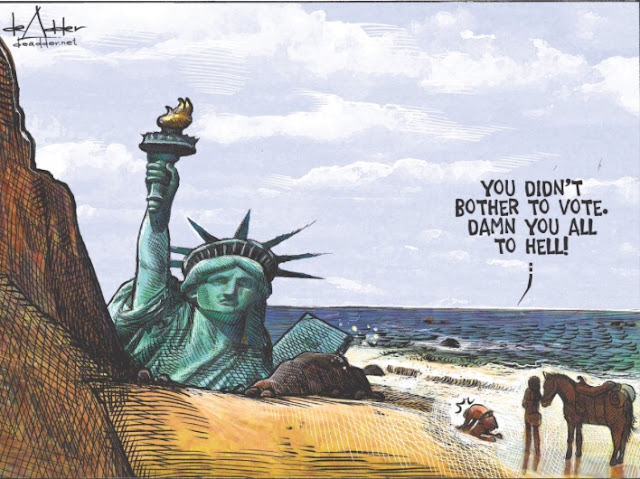 Comey is a deplorable!

p.s. Thx for video, in need of comic relief.

with just five more days to go, trump is a desperate bluffer.
that's why he is this loud.

That firewall is cracking.

you funny -
the oaf has gained for once and the trumpits are peeing themselves...

Ah, I always feel in my safe space when I visit this blog. Your doodles give me a little chuckle. Hillary is going to be indicted any moment now, while the American Hero Trump prepares to ascend his throne. He truly will Make America Great Again. As an old stock Canadian who has been following this election very closely for well over a year, I'm very pleased that it's finally time for The Annoying Orange (or whatever you call him) to shake Washington up a little bit.

Fun stuff isn't it Simon? The old noble cause, left vs right, liberals vs cons...

When the dance is over, and it's all said and done, you'll be wondering if you bit the hand that feeds you, or if it was the other way around.

OK. Anonymous 10:09 PM. Please IDENTIFY yourself in such a way (you don't need your real first name is you are afwaid). Why? So I can laugh in your face when Hillary wins!

Every time you post, how about signing at the bottom: "Anon Heheheheh!". That moniker fits you. 8-)

hi TS...you're welcome. I find myself spending a lot of time these days looking for comic relief.. ;)

hi Luce...yes he's trying to boost the morale of his deplorables, and try to recover some of the many Republicans he has alienated. But while some are crawling back to him, he will not get them all, and he will get a November surprise...

hi anon...I wouldn't cebrate too soon if I were you, because the closer the vote, the more it will motivate Democrats to vote. And the latest polls show Clinton rising and Trump falling.

It won't be over until the fat orange sings, and sing he will...

hi anon 10:09pm...You've obviously not been watching Fox News closely enough, for even they have admitted they made up that story about Clinton being indicted. And if you think Trump is a hero, or is going to win, I'm afraid you are going to be sorely disappointed. And one way or the other it's a win win situation. For even in the unlikely even that Trump does become president, it will only spawn a giant resistance movement, that will become a revolution, and sweep Trump and the Republican party out of power forever...