Donald Trump and the Kakistocracy 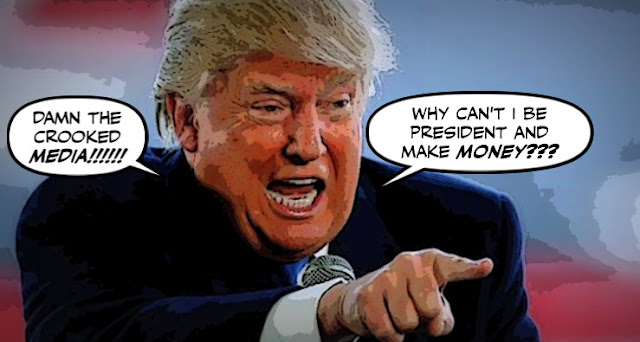 Like so many people all over the world, I sometimes can't decide what to call Donald Trump.

Is he just a vulgar hustler who conned a nation into believing he was fit to be president? Or is he a deranged demagogue, or a budding fascist, or a would be dictator?

Or all of the above?

But at least now we all know what to call some of his most enthusiastic supporters:


This is how Richard B. Spencer who created the "Alt-Right" movement celebrated Trump's victory if you're wondering why minorities are afraid pic.twitter.com/42FDHfUyXS
— Sam Kalidi (@samkalidi) November 21, 2016


Because that's Richard Spencer, the leader or fuhrer of the so-called alt-right movement, celebrating Trump's victory as only he could.

He railed against Jews and, with a smile, quoted Nazi propaganda in the original German. America, he said, belonged to white people, whom he called the “children of the sun,” a race of conquerors and creators who had been marginalized but now, in the era of President-elect Donald J. Trump, were “awakening to their own identity.”

As he finished, several audience members had their arms outstretched in a Nazi salute. When Mr. Spencer, or perhaps another person standing near him at the front of the room — it was not clear who — shouted, “Heil the people! Heil victory,” the room shouted it back.

So this lesson is over... 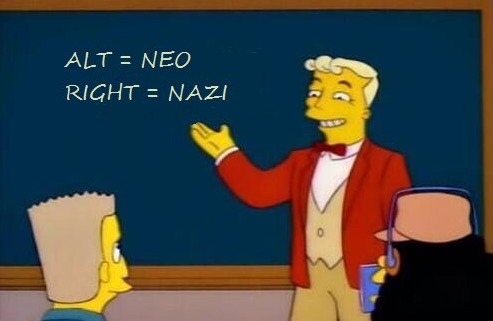 And as for Trump, since he has yet to denounce Richard Spencer and his Neo-Nazis in suits, he must at the very least be considered a fascist sympathizer.

Or a budding dictator who would turn a summit meeting with the media into a firing squad.

“Trump kept saying, ‘We’re in a room of liars, the deceitful dishonest media who got it all wrong.’ He addressed everyone in the room calling the media dishonest, deceitful liars. He called out Jeff Zucker by name and said everyone at CNN was a liar, and CNN was [a] network of liars,” the source said.

Because if he's acting like that now, can you imagine what he might do when he's  president?

When he can call on his fascist junta to carry out his every wish... 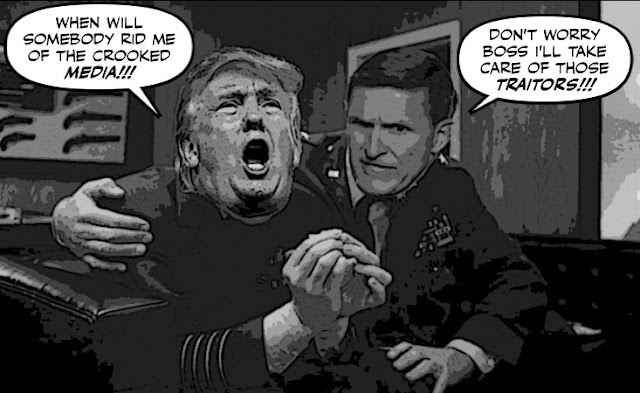 And pleasure his rabid deplorables... 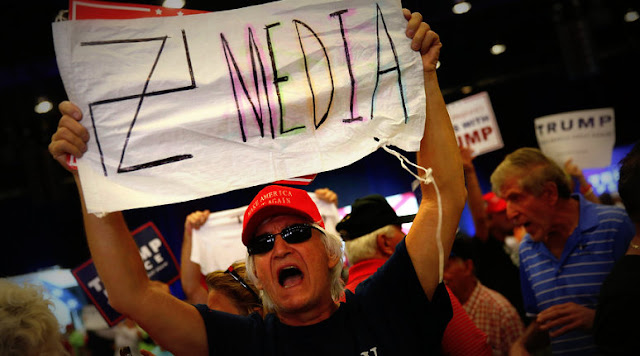 And yes, I bet the TV networks are now sorry for giving Trump all that free publicity, treating his campaign as a reality TV show.

And for failing to hold him accountable, or call a spade a spade... 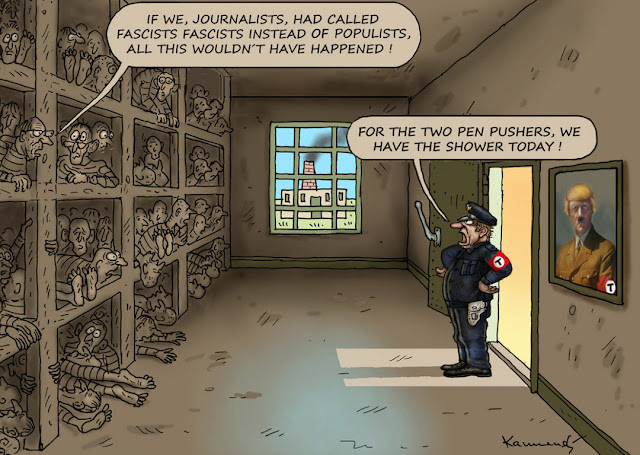 Because judging by this tweet Great Orange Leader blasted out after his summit meeting with them...

I've got a feeling they will be his first victims. After the New York Times.

Which to its credit has never ceased to expose Trump as a serial liar and a con artist, and a man threatening to mix the nation's business with his business.

It's simply appalling, and the stench of corruption is already hanging heavily in the air.

But the good news is, I think I've finally found the right word to describe Trump and his upcoming government: a kakistrocracy.

For not only does it accurately describe the government we can expect, there's also this:

"Kakos" is closely related to "Caco" or "defecate". As we saw above, it's essentially the same phonetic sounds and has similar modern words derived from it.

Quite literally, government by the shittiest.

Which inspires me to predict that Trump will end up swimming in a pool of his own excrement... 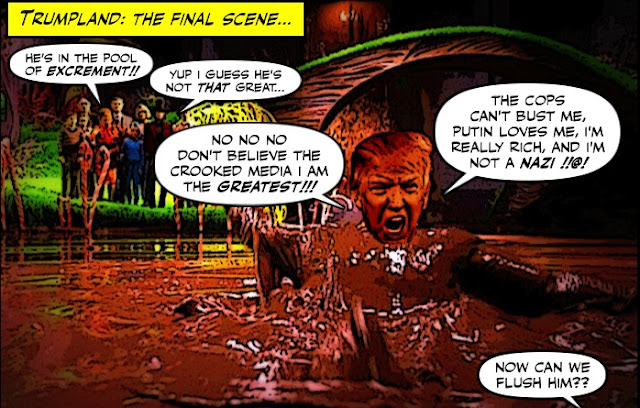 And should in this stinky time encourage those in The Resistance.

You know, tens of thousands of people took part in this protest march in New York City the other day... 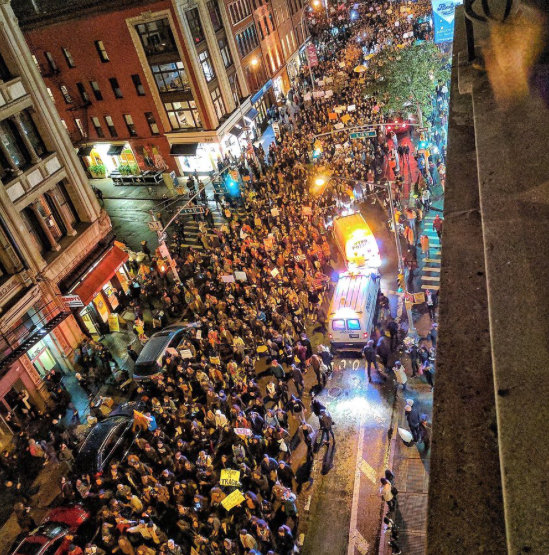 They will be millions....

I've got a feeling they will be his first victims. After the New York Times. Which to its credit has never ceased to expose Trump as a serial liar and a con artist...

Are you serious?! The NY Times spent most of the election trying to provide false balance by digging up nothing stories about Clinton's emails and making unfounded allegations of corruption in the Clinton Foundation. By far the best reporting on Trump was done, not by his hometown paper, but by its main competitor the Washington Post. The NYT's false balance problem got so bad its readers started cancelling subscriptions leading its public editor to attempt to defend it. Just read the comments below her piece to see how readers felt about the Times' coverage of Trump. http://www.nytimes.com/2016/09/11/public-editor/the-truth-about-false-balance.html

The Times has always had a hate-on for the Clintons and its reporting was a large contributor to the election outcome.

When they start numbering in the millions it will be the winds of change blowing or in Trump's case, the shit hitting the fan.
JD

Well the press DID have it all wrong. Huffington (Com)Post gave Hillary a 98.2 chance of winning the election.

The media was completely biased against Trump. They were not fair at all because they were looking after their own (((interests))).

No wonder only 6 percent of people trust the media.

Trump is an accomplished real estate huckster who believes his mind puppet skills can be directly transferred to politics. So far so good but the stakes are much higher than simple bankruptcies and endless legal battles fought with lawyers and little personal sacrifice.
Kakistocracy may be a suitable name for his government but its likely his followers/victims will be the ones left swimming in the cesspool. Before that happens he will have moved on to a richer more exalted place unless his sniffles suddenly becomes a health crisis.
RT

Actually anon, the polls the HuffPost published in their aggregator were correct. Their final number was Clinton +3 ( +/_2 1/2% )and she got + 1 1/2 . That was the election, the electoral college was off but it usually is due to lack of good polling regionally. %38 was even closer.

hi anon...no you're wrong. The NY Times, like the Washington Post, did an excellent job during the campaign. It did cover the e-mail story, but it also exposed Trump's many scandals. And it never made the mistake of equating one to the other...

hi JD...When Trump's more decent supporters realize he has fooled them, they will join progressives in the streets and they will be millions. Some of them are already abandoning him thanks to his Nazi friends. And remember there are only two years to go before the mid term elections...

hi MC...dream on. When history looks back at this sorry chapter in American history, those in the media who did their best to warn what he might do, will come off looking very good. While those who treated it as a reality TV show like CNN and others, will be harshly judged...

has any one considered that Trump might be bi polar. those mood swings of his, do make me wonder.

he will say what he wants when he wants and he has now said he doesn't support the neo Nazi group. However, it has taken enough time for him to get to that point. He doesn't care who supports him, as long as they do. perhaps its like that old circus guy said, there is a sucker born every minute and I think Trump knows that and he is taking advantage of all of them.

As Trevor Noah, pointed out last night, the President of South Africa's kids have been making out like bandits. Quess there is no reason the Trumps can't do the same. Like who is going to stop it, especially when he has appointed who he wants to the Supreme Court. Congresss could stop him, by impeaching him, but then they'd have to admit what their party did.