Donald Trump and the Cabinet from Hell 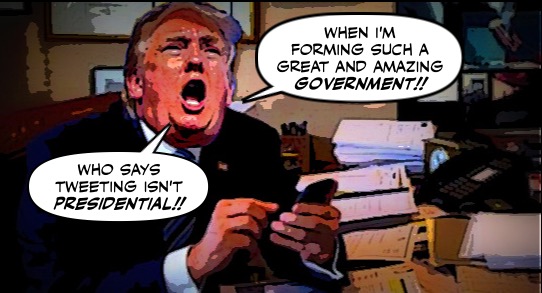 Some people believe that Donald Trump tweets compulsively just to confuse and distract his enemies.

But I don't. I think he just can't help himself...

Can't help sounding like a maniac, or a dictator.

Still, it can't be denied that Trump has good reason to try to distract Americans from taking a good hard look at the kind of people he is appointing to his cabinet.

Because they couldn't be more monstrous... 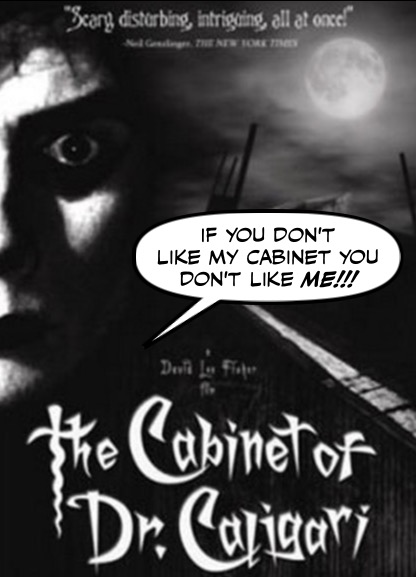 Or more out of the cabinet of Dr Caligari... 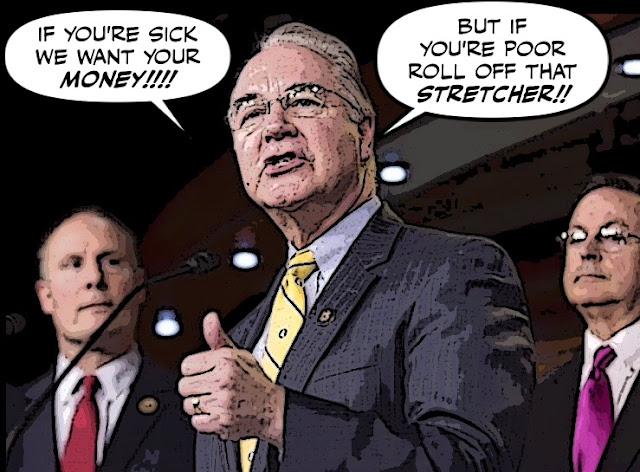 In picking Representative Tom Price, President-elect Donald Trump has chosen as his secretary of health and human services a man intent on systematically weakening, if not demolishing, the nation’s health care safety net.

Even if that means leaving tens of millions of poor and vulnerable Americans with no health care at all.

A Secretary of Education, Betsy DeVos, who is a billionaire, a religious fanatic, an anti-gay activist. And wants to dismember the public school system 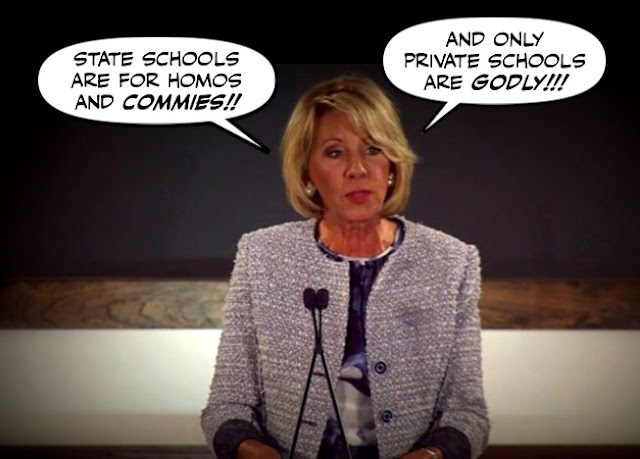 A national security adviser like retired general Michael Flynn, who believes that the U.S. is threatened by Sharia law. 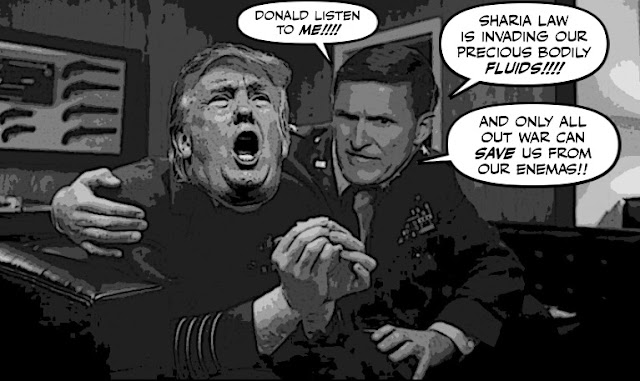 And as I have pointed out before, is right out of Dr Strangelove.

And of course, in a cabinet already worth about $35 billion, a Treasury Secretary who is a hedge fund operator from Goldmann Sachs, and got the job for only one reason.

Mnuchin is very clearly getting this job for one reason and one reason only — because he agreed to serve as the Trump campaign’s chief fundraiser in May and helped him raise a boatload of cash. There's no reason apart from this to nominate him rather than literally any other banker or economic policy professional in the country.

And maybe because he once produced the movie Mad Max:Fury Road... 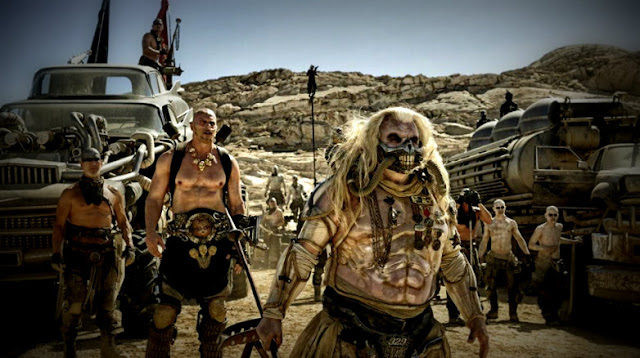 Which is probably what Trump's America is going to end up looking like.

So it is a real nightmare, but at least for comic relief we get to see Mitt Romney humiliate himself... 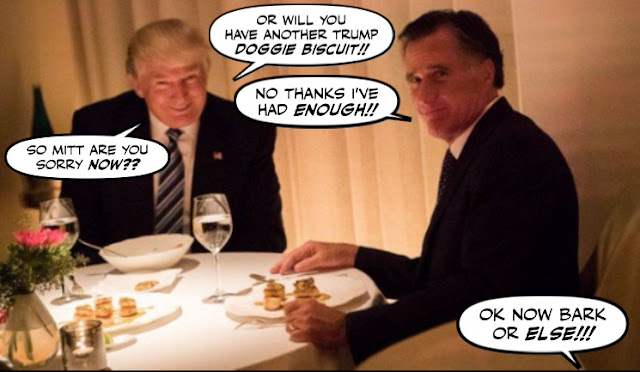 By praising Trump after what has been described as his "dinner with the devil deal.

Speaking to reporters after the meal, Romney offered a glowing review of Trump’s transition thus far and his winning campaign. Romney said “it’s not easy to win,” adding that Trump offered a vision that “connected with the American people in a very powerful way.”

After after having said such horrible things about him during the campaign.

And needless to say, to the great delight of so many people on Twitter.

But here's the scary part. We have to hope Romney gets the job he is grovelling for, because Rudy Giuliani would make an even worse Secretary of State... 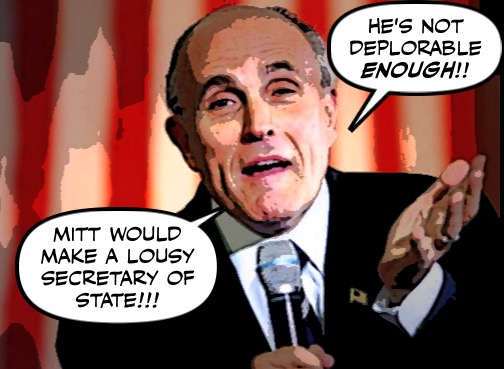 This is the cabinet of a one-term government.

It won't take long before most Americans realize that they have voted for a corrupt kleptocracy of extremists and bigots.

And realize at last what a terrible mistake they have made... 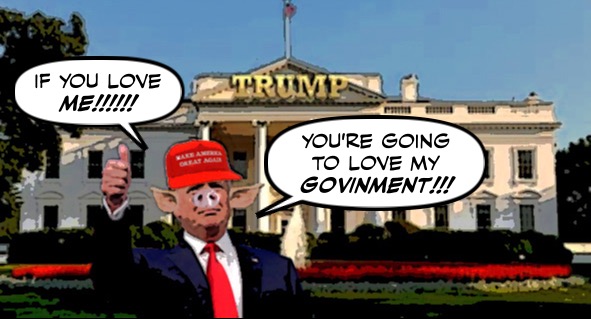 The hogs are in the White House.

And on January the 20th the resistance begins in earnest...
Posted by Simon at 10:05 AM

Labels: Donald Trump, The Death of the Republican Party, The Madness of Trump, Trump cabinet

This is the cabinet of a one-term government.

Riiight. I bet you thought that about a cabinet that included Don Rumsfeld, Tom Ridge, John Ashcroft, Andrew Card, Spencer Abraham, and all the other asshats Bush appointed. At least Trump hasn't appointed John Bolton and John Negroponte yet.

Trumps tweeting is a diversionary tactic. Everyone jumps on the tweets and forgets to check out what trump is up to. The American media just feeds into it.

It would be in everyone's best interest to have Romney in the position. at least there would be one person with a sense of what needs to be done. He may actually be accepting the job because of that. The alternative to Romney is not a great one.

Americans voted for Trump and now they get to live with it. Many may loose their health insurance and die, but that is the wish of their fellow citizens. Its survival of the fittest. When those who voted for Trump realize their children and grandchildren are not receiving a decent education or health care, they may decide to vote or vote for another party in 2 years.

there has been an enormous increase in fund raising appeals from a lot of organizations to "fight" Trump. However, once he stacks the supreme court, nothing will work. What many of these people/groups do not realize is they need to appeal to those who might vote for them and do the ground work necessary. Given the States control who votes, where and when, organizers need to get back to their roots and organize at the community level to ensure Republican governors and legislators are voted out of office and replaced by people who will not work to disenfranchise people of colour, religious groups, etc.

trump will not care who or how many protest against him. He lives in his own reality. Canada has a capable government but it will be under attack from Trump. Canada will have to build alliances and markets to ensure we can go it on our own, with other countries.

The people of the U.S.A. may find they have isolated themselves from the rest of the world in a couple of years and that they are irrelevant, regardless of how many nuclear weapons they own.

"And on January the 20th the resistance begins in earnest..."

Well, enjoy! I'll probably be at work like most normal people going about our business completely oblivious to your "resistance" but whatever floats your boat I guess. Don't forget to wear a hat and scarf, will probably be pretty cold by then.

I don't generally submit this style of comment, but I don't understand the message.

"I'll probably be at work like most normal people ..."

Do normal people remain in a state of oblivion when not at work?

Bush Jr's cabinet picks seem like there were from the far left compared to Trump's picks so far! 8-)

Donald Trump Is Picking His, Cabinet. Here’s a Shortlist.
http://www.nytimes.com/interactive/2016/us/politics/donald-trump-administration.html

Can Trump Possibly Believe What He's Saying?
Before we take the president-elect at his word, let's have a good look at those words
Released on 11/29/2016

Don't forget the timing of that 2004 election; Americans were still traumatized by 9/11, still in fear of the Muslim scourge that they were constantly told was coming, the promises of finding WMDs in Iraq plus John Kerry came off as weak. Also, Americans generally do not change presidents during wartime, they prefer the status quo. The Dems will need to put forward a strong leader to challenge Trump, or whoever is sitting in the oval office in 2020, to make sure he is a one term president. Kind of like what happened here in Canada in 2015. Harper may very well have won another term if the Liberals had elected another Ignatief or Dion for leader despite what the Cons had done during their reign.

Inauguration day is going to be ugly. That you can't see how unqualified Trump is to hold the office is disturbing. Maybe you should stay over at the Rebel where Levant can continue your indoctrination into false news and right wing propaganda. Maybe sign another petition or two, donate some more money.

hi e.a.f...Trump's compulsive and deranged tweeting may in practice be diversionary, but I still don't think he can control himself. The thrill of reaching 15 million people is too seductive, and similar to the rush he gets from his rallies. I don't think anyone can predict what he might do, and that's what makes him so scary...

hi MC...laugh if you wish, but when Trump actually starts governing, and screwing up as he almost certainly will. I believe you are going to see a resistance movement take shape that will rock the United States to its very foundation...

hi aka Joe...you're right, the Democrats better start preparing for the next election tomorrow. The Democrats need to overhaul their party, throw out all the dead wood, and avoid all the mistakes they made in the last campaign. One term for Trump will be disastrous, two would be fatal....