Donald Trump, Steve Bannon and the Rise of The Resistance 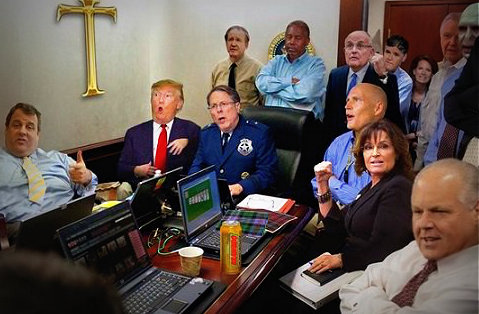 It's easy to understand why so many Americans are so depressed, or so angry, at the thought of a Donald Trump government.

Having any one of those deplorables in the situation room, or anywhere near the nuclear button has to be a living nightmare.

The idea of the sleazy Rudy Giuliani as Secretary of State is enough to make one vomit.

And Trump's decision to make the grubby racist Steve Bannon his chief strategist is an absolute abomination. 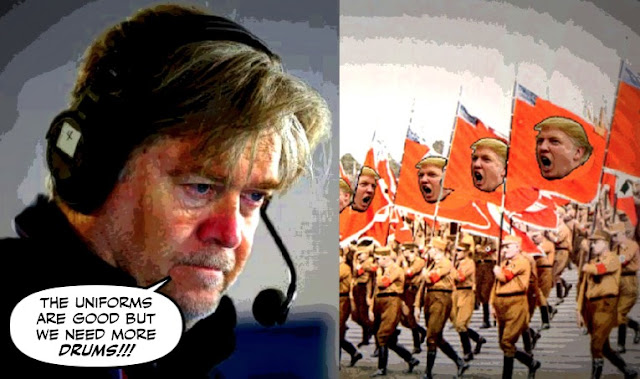 For by so doing he has invited the alt-right crazies into the White House.

Bannon boasted in July that Breitbart is the “platform for the alt-right,” and under his leadership for the past four years, the site has peddled alt-right conspiracy theories and promoted various racist and sexist views. Classic headlines include “Bill Kristol, Renegade Jew” and “Birth Control Makes Women Unattractive and Crazy.”

Bannon is already reaching out to right-wing extremist parties in Europe.

And as you can see from some of the swag Breitbart peddles... 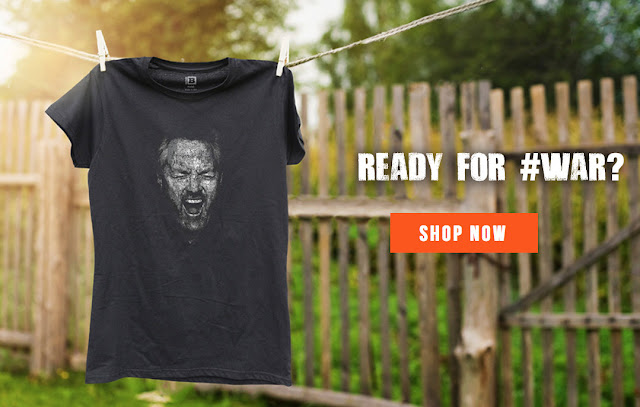 It is going to be an all-out war.

Some of Trump's violent supporters are already attacking peaceful protesters as this one does in Ohio...

And it can only get worse as hate crimes surge.

The F.B.I. reported Monday that attacks against American Muslims surged last year, driving an overall increase in hate crime against all groups.

In its report on Monday, the F.B.I. cataloged a total of 5,818 hate crimes in 2015 — a rise of about 6 percent over the previous year — including assaults, bombings, threats, and property destruction against minorities, women, gays and others.

Because this is who they are...

But while Americans, and the rest of us, do have a lot to fear from Trump and his fascist followers. 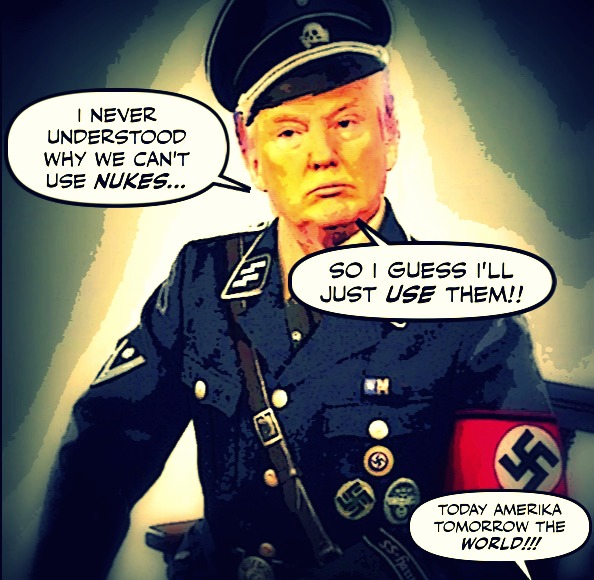 For who can be sure how soon that deranged demagogue will start bombing Iran, or trigger the Third World War? Two months after he's inaugurated, or two weeks?

Even as he moves to torch the planet by sabotaging the Paris climate agreement, or in his monstrous Trumpland by relaxing emission standards.

So all of us in North America can choke in his fascist fumes.

It is a scary time, but here's the good news... 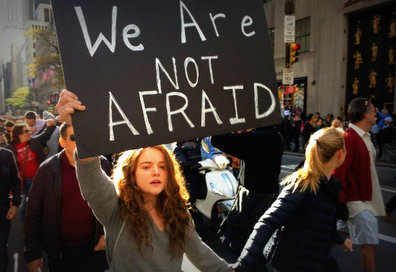 That bestial predator, that orange oaf, has united progressives like never before.

He has awoken a sleeping giant, and is creating a mighty movement that will bring him  down in flames.

He is creating the conditions for OUR revolution. The useful idiot.

The Resistance is rising.

And this is just the beginning...


Let Trump and his baboon Bannon boys listen to that.

Hear the sounds of a movement being born.

The one they helped create, and the one that will destroy them...

Simon, can we stop using the "alt-right" euphemism? There are perfectly good words in the English language to describe them, such as white supremacist and neo-Fascist. For a group that supposedly hates PC, they sure don't like plain English.

Muhahahah! Yes, burn the planet! Destroy every last tree, we'll figure out a new way to print dollars without paper! Maybe rocks or something...

So how about all of the attacks on Trump supporters? The door swings both ways. Care to explain all this violence carried out by "progressives"?

I'd like to remind you that many of the protesters... ARE PAID. There are ads on Craigslist in every major city looking for them. They are being bused in. Your "revolution" is a farce.

You are a fool
You don't know that if a progressive can be paid to protest, a white supremacist can be paid to say he is progressive, getting paid for protesting. Enjoy your imaginary sunshine... just remember: you can die of exposure.

Did you even bother to watch any of the links to videos I posted? Probably not. The first one is a man pulled from his car by some of the homies and is brutally attacked while he keeps trying to escape.

Second one, is a teenager being beaten at a high school because she's accused of being a Trump supporter.

Third one, is a man viciously attacked because he's simply wearing a Trump hat.

Luce, my naive flower child, white supremacists aren't paid protesters. Where the hell did you get that assumption from? You think the old folks in their 60's and 70's who voted for Trump were bused down to Chicago to protest against someone they voted for? Completely ridiculous theory.

What you're saying is the equivalent of black supremacists protesting when Obama was elected. So far-fetched I had to take a screenshot of your response and share it on FB.

Yep, the truth is out! Need all those assault riffles to protect ourselves from those violent pacifists that want to wage war with those that are different.
RT

Lots of false flag attacks. Y'all need to quit drinking the kool aid.

i wish to thank you, Simon, for while you can't make things fun any more than the rest of us, you sure make them funny...

in your intro picture, i really like the cross-turned-trump with christie 'pulling a trigger' under it, trump doing indecent things (i think he may be being himself), bannon quietly plotting, carson blisfully dozing off, giuliani as obviously surprised by the turn of events as trump... room full of deplorable nannies... but tell me, is that lord voldemort in the top right corner?
you my patronus, Simon!

ah MC, you are right - i don't like admitting to it, but i didn't watch these links...

1. f-ing busy day (with only my phone, no laptop)
2. i have seen several videos of this kind before
3. i have personally witnessed provocateurs (that were released from a polished white van with no windows) jump on a bunch of young people that provided first aid to protesters in Quebec City in 2001, i was there, when dude that beat up my friend (who got later arrested for inciting violence) and then got absorbed behind a wall of riot cops, like it was nothing.
4. lamest reason of all: I HATE VIOLENCE. i can't stand seeing it. i hate it. i hate it. i hate it.

many people got dirty from trump and now they are sick all over, hurting each other - people on the left side, as well as those on the wrong side. what was the purpose of these links, anyway? are we supposed to feel bad? should we give up? feel ashamed? i'm ok with being a flower child. i'll hold on to my sun, my hope and my thorns :)

hi anon....I don't like the term either. I also much prefer white supremacist, and neo-Fascist. The only reason I use it is because it is used in the articles I link to. But I'll see if I can find some way around that....

hi anon...Trump's plans to sabotage the fight against climate change is the main reason he should be opposed and eventually defeated. For while humans can recover from fascism, our planet will not survive those who would deliberately destroy it. And saving it is our sacred duty for those who will inherit it....

hi Luce...it's very hard to keep smiling in the midst of this darkness. But I am determined to try. When I was fighting bullies in high school I also had a smile on my face. But they soon learned the hard way, that it was only because I was sure I was going to beat the crap out of them. I didn't go to the Glasgow Street Fighting Academy for nothing you know... ;)

The U.S.A. as a country may abandon things like measures to reign in climate change, but individual states may not, so there is hope It is doubtful China will abandon their strategy for climate change. They're chocking on their pollution and want change. There maybe emerging economies which abandon the Paris agreement, but that might not sit well if they belong to the E.U. Russia, well they're a rouge nation, let me change that, they have a rogue leader.

My greatest concern is that Trump will give the Russian mob access to the U.S.A. Putin and his oligarchs have looted hundreds of billions from their country. Given access to the U.S.A. they will do the same and we are sitting right on the line. Not a good thing. This could be a greater threat to our country than war or pollution, the criminalization of an entire economy of a country.