Donald Trump and the Demonic Song of the Religious Right 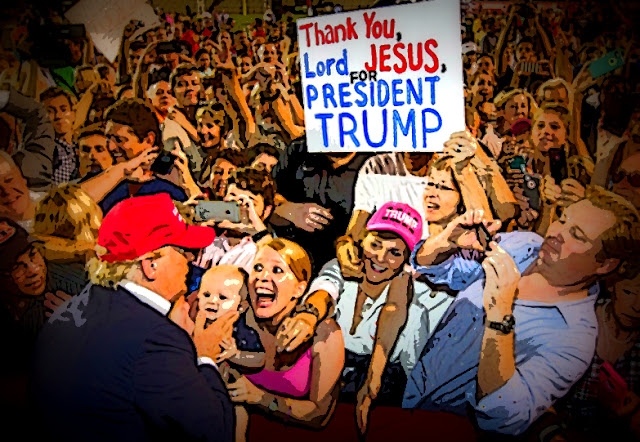 Despite Donald Trump's abominable record of spiritual and fleshy corruption, the  religious right in the U.S. still worships at his feet.

And are willing to forgive him his trespasses, in return for his promise to appoint God's chosen people to the Supreme Court.

So they can punish women for having an abortion, and launch an all-out assault on gay rights.

And of course destroy Hillary Clinton, who they believe is either the anti-christ, or possessed by demons... 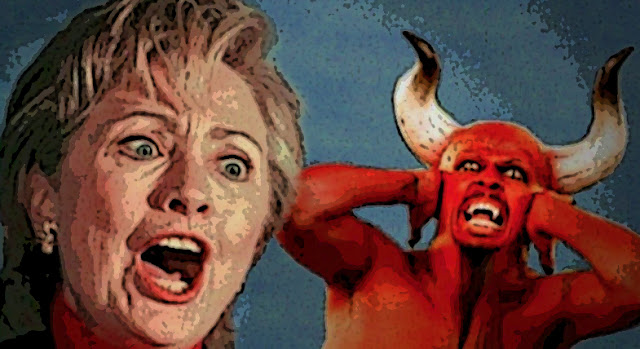 Or the devil himself herself... 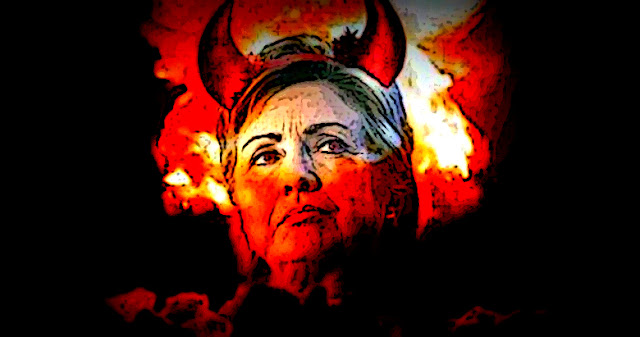 And the extent they will go to demonize Clinton has to be seen to be believed...

And remember if those fanatics get their way, and their Lord Emperor does get to rig the Supreme Court, those justices will get to determine the course of American justice for the next TWENTY years.

No matter what government is in power.

And throw that country into a darkness that cannot be lifted.

And yes, get out and vote as if your lives depended on it.

For that is the way fascism can indeed come to America.

Those religious fanatics are no Christians.

And Donald Trump is the devil incarnate... 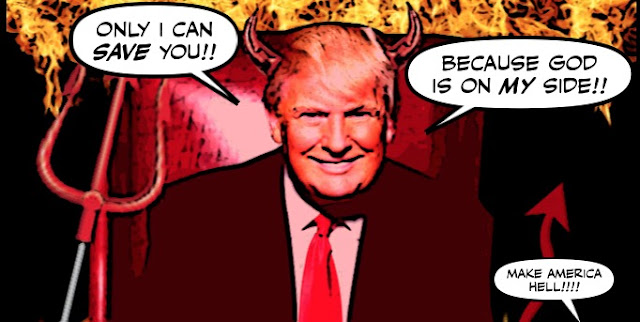 The innocence defiled... What's wrong don't like the taste of your own medicine? The left is notorious for using children in attack ads. I seen one with young girls and another with Mexican children swearing like drunken sailors.

the singing bible is traumatic like very few things are. thanks, Simon.

but isn't that simply justemerika? aren't they all ideologically inbred like this? is this new?

(the one truly dispiriting and horrifying thing about the video is that this kid, this little singer is, in thedonald's emerika, called a pussy).

but even in emerika, most people are not ok with this. angelou reminds all of us where the truly divine things are:

donaldthebigoaf should not expect herstory to be kind. in purely Hegelian sense, thedonald is such a deviation that no matter what happens in this stupid election, kindness, love and compassion can be expected to push back.

Did you know there are pro-life Democrats, such as Democrats for Life of America:

If I were an American, I would be a pro-life Democrat.

Chittister commented: "I'm opposed to abortion. But I do not believe that just because you're opposed to abortion that that makes you pro-life. In fact, I think in many cases, your morality is deeply lacking. If all you want is a child born but not a child fed, not a child educated, not a child housed and why would I think that you don't? Because you don't want any tax money to go there. That's not pro-life. That's pro-birth. We need
a much broader conversation on what the morality of pro-life is."

Obama’s Culture of Life: The Abortion Rate Has Fallen 13% Under This President (February 3, 2014)
http://www.politicususa.com/2014/02/03/newsflash-republicans-abortion-rate-fell-13-president-obama.html

If You Are Truly Pro-Life, You’d Vote Democrat
http://www.patheos.com/blogs/faithfuldemocrats/2012/09/if-you-are-truly-pro-life-youd-vote-democrat/

Republicans Talk A Lot About Lowering The Abortion Rate, But They Don’t Actually Deliver
https://thinkprogress.org/republicans-talk-a-lot-about-lowering-the-abortion-rate-but-they-dont-actually-deliver-cea7537eb87b#.m5gao61dp

The Cubs won the World Series a few days ago, and yesterday my beloved Montreal Canadians lost their first game of the season 10-0 to Columbus.

Oh and one other thing, what do you think of this whole Spirit Cooking thing Simon? Pretty creepy methinks.

If Trump loses, then Mary Colbert will be a false prophet:

hi anon...the left has indeed used children in its attack ads, but has never had them mouthing such horrible words over such disgusting images. Talking about forgiving Dirty Donald's sins over an ultrasound of a fetus was appalling. But the ISIS stuff was even worse. And no decent Christian could possibly support a sexual predator like Trump...

hi Luce...I'm sure most Americans would be appalled at the sight of a child singing such a horrible song and demonizing Hillary Clinton in such a violent way. I hate to imagine how that child is being brought up, but if I ever met her parents I'd give them an earful...

hi David...I don't know how closely the Amish are following the election, but if they are I'm sure they must be disgusted by what they are seeing. I actually had a chance to interact with some of them once, and I found those I met to be very nice people. And I must say, like the Mennonite farmers, they make excellent apple pies... ;)

hi anon...well at least when it comes to sports we seem to be on the same sight. I was thrilled by the Cubs win. But I don't quite understand why you consider the humiliation of our beloved Canadiens to be a good omen. Is there something I'm missing?

hi anon...I tried to look up "spirit cooking" but when I saw that some in your gang were using whatever that is to allege that Clinton is some kind of devil worshipper, I gave up in disgust. Honestly, how creepy can you guys be?

hi David...Mary Colbert is NEVER wrong. She predicted I would be prime minister and a billionaire, and I'm sure it's only a matter of time... ;)