Scottish Independence and the Search for the New Left 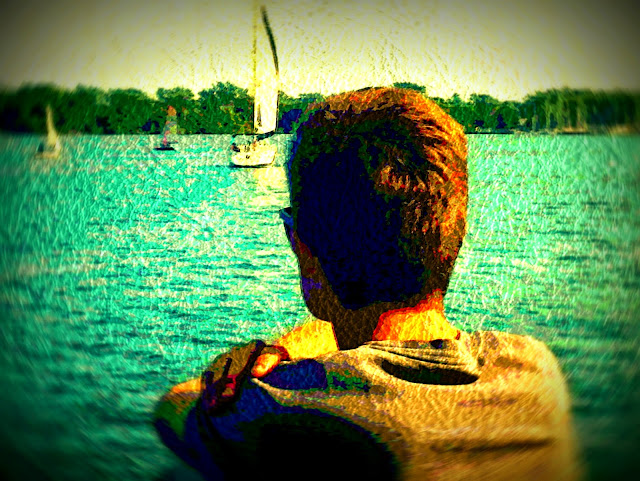 OK. So it's probably not the best time to leave Canada. Not in the middle of that tragically short warm period we call summer in the Great White North.

But politically it's the dead season here, or even deader than usual.

While in Scotland where I'm going, it's very much alive. 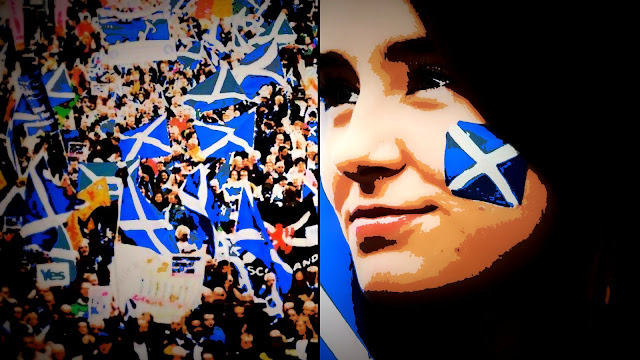 Because two months today the Scottish people will decide whether they want  independence.

And while I doubt the YES side will win in the end, thanks in part to a little help from Canada.

And the offer of more powers for the Scottish Parliament. Doesn't that sound familiar?

What excites me the most is that it has already changed that country, by shaking up the staid stagnant left with a new and exciting approach to progressive politics. By creating what the Glasgow writer Gerry Hassan calls the Third Scotland.

Sceptics pour scorn on what this ‘third Scotland’ stands for but its political agenda is clear. It is for self-government and independence as not an end in itself, but as a means of bringing about social change.

And they see the old mechanisms of social change such as the Labour Party, labour movement and British state as having consistently failed and colluded with inequality, power and privilege.

And getting huge numbers of young people involved in the political process, many for the first time.

By simply asking Scots what kind of country do they want to live in, and what kind of values do they believe in? 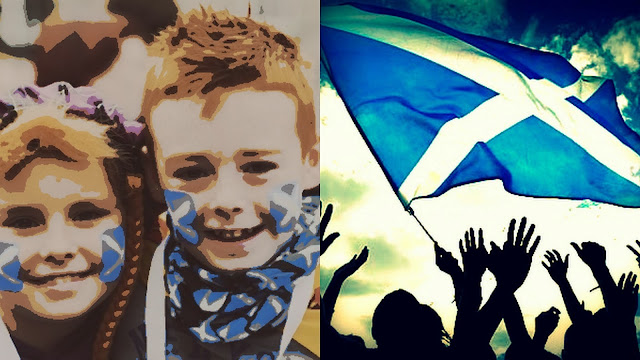 A country with right-wing values where David Cameron's Conservatives are dismantling the social safety net, waging war on the poor and the young, and trying to privatize the National Health Service.

Or a country like Scotland that wants to maintain and expand the social safety net, provides free university education to its young, and wants to improve public medicare not privatize it.

A country that during the last war on Gaza closed its airports to American planes carrying bombs to Israel.

Where many are now asking for a society where WE comes before ME.

And this National Collective of artists that I support, spreads the optimistic message that the beginning is near or NOW. 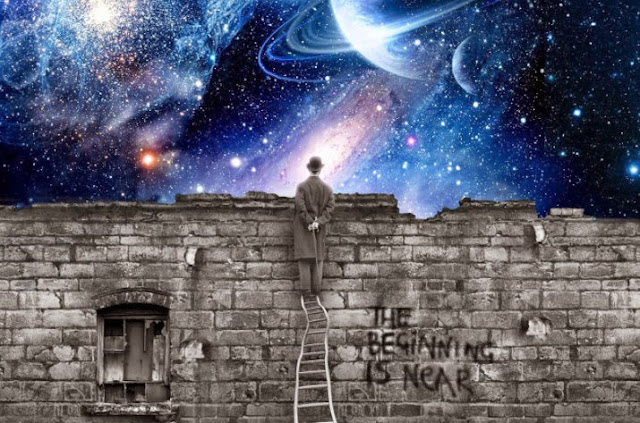 When we live in a relatively well off society, it takes a brave individual to imagine and suggest another possibility, a possibility where we can build and live in a society which serves better moral ends than those of the elite who run us now. We need to remind ourselves that a better Scotland and a better world is possible.

A society where we don’t settle for fine but fight for good instead; a society which serves the good of humanity and the environment and governs itself in a fair and socially just way instead of settling for elite rule and class oppression. A society which never lets a child or adult go hungry, and stands up for this basic right across the world.

Which is of course just the message I want to hear, and the kind of country I want to live in. And the hope that I have for our broken Canada.

Because after watching this story by Lyse Doucet, about the four Palestinian  children who were mowed down by the Israeli war machine while playing soccer on a beach.

And then watching this video put out by the Harper Cons tonight...

I sometimes have trouble recognizing what country I'm living in.

And I definitely do want something better.

Oh well, I'm going to check out all of this action in the rebel highlands where my parents live. I'm going to see if I can borrow any ideas on how to put some life into our moribund progressive parties.

And since I'm taking my lap top with me, I will try to write a few posts, and tell you what I see on the other side of that wall.

If I'm not too busy.

Because as you can see the place I'm going to, is just BUZZING with activity... 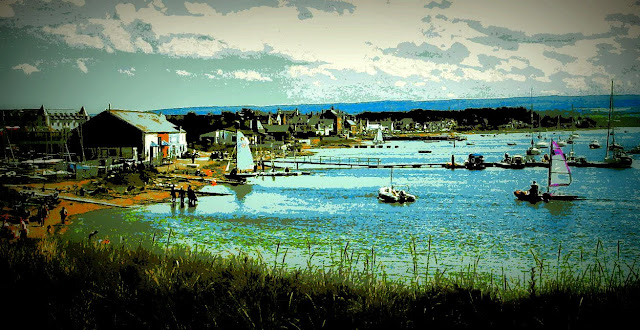 But seriously though, you are the best readers in the world. And the most patient. And I love you all.

So wish me luck eh?

Please keep an eye on Lord Harper and his criminal regime while I'm gone.

Always keep dreaming of something better.

Have a great trip Simon! Bring back that national collective movement message to your fellow Canadians.

Oh, if only we Celts would reunite like the days of old but wiser to the deceptive ways of Rome (City State of London today), we could change this world.

IMHO the root of all evil is/was anglo saxon behavior. Best whises for an Independent Scotland. As GWB and William Wallace both said for differant reasons "FREEDOM"

I'm starting to feel so depressed about the state of politics in general in the West (UK included, of course) that I'm not sure what to do...but you are right, Simon, there is always reason to hope....and the fact that the young here during Occupied got active on some level, and that the same thing (same vibe) is happening across the pond makes me a little less depressed....keep us posted, I'm still rooting for the 'yes' side as the last thing that Britain needs is still more capitulation..the British people seem to be taking care of that.....
You're correct about the so-called Left here, as well...but of course the Greens aren't all of the answer either, just part of it. I don't feel comfortable supporting any of the current parties Federally at this point, but will vote NDP out of a lack of choice, which means, once again, they will fail, because their lean to the right is a suicidal move, too...Something has to change and here's hoping that the Scottish Referendum will be a catalyst for that....

Well, we had a large and lively demonstration here in Montréal yesterday, upon very little notice and on a Wednesday just after standard working hours, against the assault on the Palestinian people. Manon Massé, an MNA for Québec solidaire (and an "out" lesbian, by the way) was on hand, and there were Hassidic Jews and many Muslim ladies in hijab (and others not in hijab).

I'm just sick imagining those little Gazan boys escaping their dismal reality for a moment by seeing themselves as stars of the World Cup which had just been followed by billions around the world, even in Gaza - and Israel - and getting killed as "collateral damage".

I'm reading a more detailed account of the Gaza deaths, other than the four cousins (whose grandfather spoke out - I can't seem to find his statement) 12 other children who were taking part in the match were wounded.

I just don't believe politics are dead, this time of the year. You can be sure Harper is doing many underhanded plots behind our backs.

If you recall? There was mention of, BC's ancient forests being destroyed. And Harper had made a trip to, Vancouver Island? Seems, loggers are cutting those priceless heritage forests down, near Port Alberni. The evil Christy Clark, never said a peep about those priceless forests, being destroyed by government greed. I have a very good idea, who will get those raw logs.

Then there are the Chinese, who will be brought over for, Harper and Clark's Northern BC mining plan. There is still, Harper's FIPA deal with China. Harper and his Cabinet mulling, a massive Chinese resource project in the High Arctic.

I wonder why? Harper gave Poland the BC ship building contract?

Why did Harper take a plane load of people with him when, he made a visit to Israel?

Why did Harper stick his fat face into the Crimea, Ukraine and Russia dispute?

Why are their Engineers from India brought here? There are Canadian Engineers, looking for jobs.
info@ashakiranlive.incanada

Why did Jason Kenny lie about the TFW? Does he think we are too dumb to see, Harper is getting all of his ducks in a row, to cheat the next election too. My guess is? Harper is buying up ethnic votes. Chinese, Jews, Ukrainians, Polish and India. I wonder what Harper will give to the next country for votes and donations. Harper is racking up a large number of ethnic votes.

FYI... the reality is that the HarperCons will win another majority government in 10/15 solely on the vote in the ROC and rejecting another PM from corrupt, greedy, anti-English, anti-Canada, separatist nation of Quebec!

Even strategic voting will not dethrone the HarperCons because it's too confusing for voters. It may satisfy you, but you are a minute minority.

The only way to beat the Conservatives is to vote Conservative in the 10/15 election to force defeat on the stupidly divided centre-left with their garçon quebecois leaders who hate each other. The Libs and Dips survival will depend on a merger to Unite the Centre-Left... and find a leader NOT from Quebec.... it's sooooo obvious!!!

... and stop with the stupid, self-satisfying, immature hatemongering outbursts directed at PM Stephen Harper because he is NOT your enemy.... your enemy is your abject ignorance/stupidity thinking that Junior Justin or Bristly Mulcair can defeat Harper! They can't, and neither can you based on your thinking and feeeelings!

Every one of those issues you raise will be rendered irrelevant and insignificant when Canadians make their voting decision in 10/15. Canadians will simply look at the leaders and decide who best represents their interests domestically and internationally... plain and simple.

Justin is a joke and Mulcair is an opportunist... and both are from the separatist nation of Quebec. End of story.

have a fabulous time in Scotland, its a gorgeous country with gregarious clever people. Keep us up to date when you can:)

Don't worry, the Duffy scandal will still be here when you get back. Although it is possible that Dear Chickenhawk Leader would have decided to bravely run for the hills, assuming that we are not being led down the garden path by the 31 RCMP charges. Have a good trip, Simon.

@anon 6:42 Maybe you should be spending your time on Mike Duffy blogs flogging your man there. Harper and his band of banana republicans is toast,

@Steve.... if you say so, but you conveniently ignore the looming fact that true and loyal Canadians in the ROC (excluding Quebec) will NOT vote to elect another PM from the corrupt, greedy, separatist nation of Quebec. They didn't in 2008 with Dion and republic-lover Iggy in 2011 where the ROC voted in a majority Conservative government without needing Quebec.