Stephen Harper and the Ghost of Bruce Carson 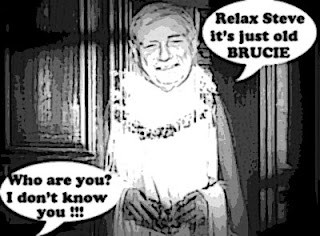 Golly. I wouldn't be surprised if Stephen Harper is having nightmares these days, like Ebenezer Scrooge did in A Christmas Story.

Waking up in the middle of the night, sweating like a pig, staring at the ghost of Bruce Carson come back to haunt him.

Prime Minister Stephen Harper found himself in political hot water Friday after the Mounties announced they have charged one of his former aides with influence peddling.

And screaming NOOOOOOOOOOOO !!!!!! so loudly people all over Ottawa will think Vic Toews is on the prowl. And rush to lock their doors, or hide their babysitters.

But then who can blame Great Moral Leader eh? Now he'll have to try to explain all over again why he hired Carson, the man he called The Mechanic, despite his lengthy criminal record.

Why he claims he didn't know Brucie's rap sheet was THAT bad, when Carson's lawyer says he told the Con operatives in the PMO EVERYTHING.

And of course, if Carson's (former?) friend and (former?) business partner, the former escort, gets dragged into this scandal, it'll be even more embarrassing... 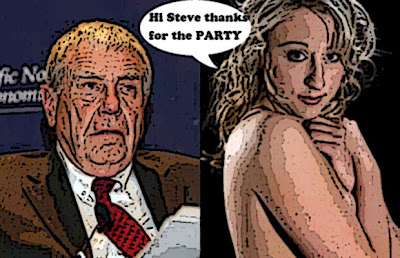 For then Harper will have to explain why the glamorous couple were the stars of a glitzy ball thrown by Steve and Laureen at 24 Sussex Drive. A sort of Con Cinderella story with a touch of Cabaret and Lolita, that had the party faithful wagging their tongues for WEEKS.

He'll also have to tell us if he intends to appear as a witness for the prosecution, OR the defence. And if that depends on whether his now not so good friend Brucie threatens to write a book.

Carson has also told people close to him he’s writing a book after receiving a deal from a publishing company. The book is said to be on the modern-day Conservative party.

And of course what I want to know is how he feels about his one-time special adviser and good buddy being accused of influence peddling. His former campaign director Doug Finley found guilty of electoral fraud. His parliamentary secretary being investigated by Elections Canada. His Quebec lieutenant being probed by the Ethics Commissioner. Again.

And does he still think Canadians will believe him when he says his Con mob isn't capable of stealing an election?

I mean really. You be the judge. Is this a government or a criminal conspiracy? 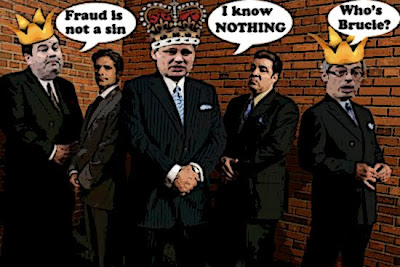 And the good news? As Frank Graves pointed out the other day, no majority government has become so unpopular so quickly since the Mulroney Cons in 1989. And it was the beginning of the end. They died of many wounds, but it was the stench of corruption that finally suffocated the life out of them.

And so it will be for the Harper Cons. If we can pluck some of the phony economic plumage off that tired old bird.

Baste it with the oily goodness of scandal.

And then turn up the HEAT...

The Cons should be good and cooked long before the next election.

Yummy. Please Sir, can I have my chikin well done?

The Cons are destroying themselves.

Pfft, at this point I doubt Stephen Harper's been getting terrorized by Bruce Carson, good ol' Tommy Douglas is probably "visiting him" giving him midnight lessons about not messing with his healthcare. THEN he gets night tremors and wakes up sweating like a pig.

Far out. Keep up the pressure. Perhaps a true implosion will happen.

Wonder what kind of advice Dear Leader was looking for when he hired someone who is on the public record as being disbarred from his profession and had been convicted of fraud in a court of law? And Harper is known for disdaining ole Irish eyes ... oh the irony, eh?

Harper was so terribly frantic and rabid to win the election. As we now see, Harper's dirty tactics and dirty politics, 3/4 of Canadians no longer doubt, Harper cheated to win. He is frantically using every dirty tactic in the book, to quash the robo-call cheat investigation. Same with the ridings in dispute. Harper is appointing, two new Conservative judges for that event.

I think it's Occupy time for Harper and his ranting and raving ministers. If Harper was P.M. of England, he would be in prison. Harper is on the hit list of, more than a few country's.

Curious how the announcement was made on Friday, and not just any Friday, but the Friday of the Olympics opening ceremonies. It reminds me of the In-and-Out plea bargain that was announced to the media on Remembrance Day.

TV media had already scheduled their Remembrance Day programming and didn't have any time to talk about In-and-Out. (and what time they did have went to discussing the Trans-Canada pipeline)

hi anonymous...well I meant in the sense that Harper would rather forget Brucie, because he does have so many good stories. Like the day Harpo made him his man on the Afghanistan file,and we lost the war. But yes, Tommy Douglas would probably give Great Leader the shakes. Because Brucie would be unctuous, but Tommy would be angry...

hi anonymous...I'm always hoping for a happy implosion, or a freak tornado to whiz them all back to Alberta. But as long as the whole damn house of cards comes down in the next election,and some are arrested, I'm easily satisfied... ;)

hi anonymous...I can't imagine what kind of advice Brucie might dispense to someone like Great Mob Leader. I shudder to think, because he's not easily impressed. But as I pointed out in my post there are so many naughty Cons one can only judge Boss Harper by the company he keeps...

hi anonymous...no I don't think Carson could be the dastardly Poutine. He's smooth but not that smart. And he still uses a rolodex... ;)