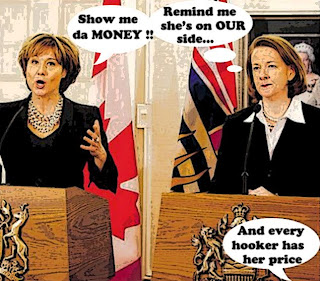 I wish I could cheer for Christy Clark in her battle with Alison Redford over the future of the Northern Gateway pipeline.

But I just can't eh?

I just don't believe that bartering with someone who wants to shove a pipeline up your ass is something that should be celebrated. At least not in polite company.

And although she's posing as B.C.'s Great Defender, Clark and Redford are actually both on the same side. Both want the pipeline built. So I agree with these people.

First Nations opposed to the proposed Enbridge Northern Gateway Pipeline project are accusing B.C. Premier Christy Clark of selling out British Columbians and putting a price tag on the future of aboriginal people.

"It is absolutely unacceptable for our premier to play a game of 'the Price is Right' while putting our lands, our waters and our futures at risk to devastating oil spills," said Terry Teegee, tribal chief of the Carrier Sekani Tribal Council.

Because that's all it is: a sellout. From a Premier so desperate she would put a price on something that is PRICELESS. Trust the future of her province to an outfit like this one.

And barter like a hooker, while the planet burns.

Canada’s tar sands, deposits of sand saturated with bitumen, contain twice the amount of carbon dioxide emitted by global oil use in our entire history. If we were to fully exploit this new oil source, and continue to burn our conventional oil, gas and coal supplies, concentrations of carbon dioxide in the atmosphere eventually would reach levels higher than in the Pliocene era, more than 2.5 million years ago, when sea level was at least 50 feet higher than it is now.

Oh boy. You'd think Crusty might have noticed that global warming may be speeding up. And making droughts longer and more devastating. Like the one burning its way through the United States.

You'd think she might have seen what this most optimistic forecast from the National Center for Atmospheric Research predicts for Canada and the world: 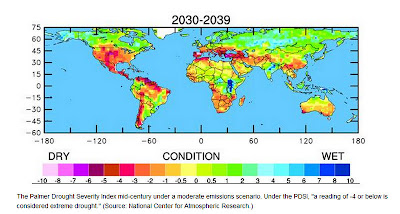 You'd think she might have noticed that Alberta is going to be the FIRST to burn, and be turned into a desert. Taken that as a bad omen, and put the future of B.C., the future of Canada, and the future of the world, before the future of her shabby political career.

But no, she'd rather play into the hands of Big Oil and the Harper Cons, who would be only too happy to pay B.C. a pocketful of chump change, if it agrees to be poisoned in a sea of oily goodness.

Fortunately, I'm pretty confident that the people of B.C. won't be fooled into selling themselves so cheaply. And of course, I'm with them all the way eh?

The Harper Pipeline must be STOPPED.

Almost as much as Maymo fears his mouse...

Exactlty,
|I hope this is wrong, but I would not doubt this is all staged by Harper and friends, namely Reford, Clark and Corporate greedy guts...

OK you get your way Christy, We'll make a bunch of false promises...Let's Rock

Christy Clark and her BC Liberals work for Harper, as did Gordon Campbell before her. Christy even had another of comrade of Harper's working for her. Boessenkool who works for Harper, and lobbies for Enbridge.

Harper and the Campbell/Clark BC Liberals, have done enough evil dirt, to BC and the people, for over 11 years now.

Most BC citizens, will not trust Harper and his Conservatives, nor the Campbell/Clark BC Liberals, with their hands on a stack of Bibles, up as high as the Muir Space Station.

it is all like a very bad sitcom. unfortunately it is politics in B.C.

B.C. would never make enough money to compensate for the land & water spill cleanups & the loss of property values & other jobs. You gotta wonder why even discuss a price?

B.C. might be thrown a few dollars but compared to the huge profits Alberta, China, & multnational corporations will make its nothing. People like chrusty & her fellow travellers think so small. They know how to "steal & give away" but they don't appear to have any understanding of the big picture when it comes to money. I think that is actually the problem, people like Harper, Campbell, Crustie think small. China thinks big. They are buying a lot of Canada, now that is business, buying another country's resources for your own countries benefit at bargain basement prices to make huge profits for your own country. I am not happy with China's involvement in Canada but I have to hand it to them for being smart to achieve their own ends.