Alison Redford and the Pipeline to Nowhere 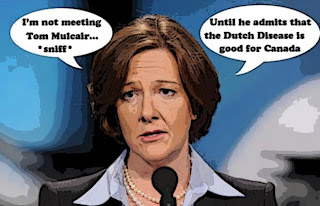 Holy hee haw. Lasso me like a baby steer. I can't believe that Alison Redford is still snubbing Tom Mulcair.

Redford said no meeting with Mulcair is on the books.

"Nobody's asked me to meet with him and I'm quite busy Stampeding and speaking to Albertans about what matters to them."

Because she's got better things to do eh? Like flipping pancakes at the Redneck Rodeo, or watching horses die.

Which only makes Mulcair look even more like a real leader

Trying to work out a plan that is good for Alberta and good for Canada. While she pouts in the corner. Does that make sense?

Now look I rather like Redford. She's definitely a big improvement over the last two Premiers of the one-party petro province. Especially the one who used to get drunk all the time, and throw money at the homeless.

And I do realize that she has to deal with Danielle Smith and her Wildhog Party.

And that that can be a challenging experience an oinking nightmare... 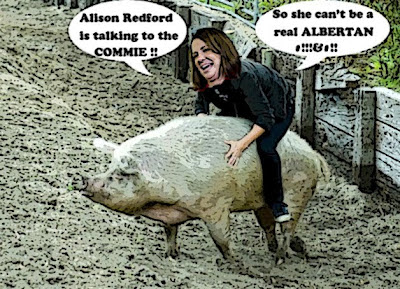 But maybe she should just get a grip on the new reality. Understand that the dirty oil pipeline to B.C. is going nowhere.

If Enbridge has not yet got the message, it needs to be told: Its proposal to build the Northern Gateway pipeline through B.C. is dead. The company, in the best interests of its shareholders, should withdraw its proposal and go back to the drawing board.

Even Barbara Yaffe knows that. And that perhaps it's time she should start taking Mulcair and the NDP  seriously.

The NDP leads the Conservatives in both B.C. and Quebec. In crucial Ontario, Mulcair’s party is only three points behind Harper’s crew. The New Democrats lead by eight points in Atlantic Canada.

All this is happening while the tattered Liberals still scoop up 20 per cent of national support. If the left manages to merge or if the Liberals simply collapse under the weight of the NDP, it’s look out Stephen Harper.

They all must know — and Redford surely does, too — that everything is breaking Mulcair’s way.

Because if he hadn't focused attention on the tarry wastelands the Cons and Big Oil might have got away with it. And the more Redford snubs Mulcair the more popular he becomes. If that's possible eh?

Golly. I'm starting to LOVE this movie. The dirty oil pipeline is going nowhere. Stephen Harper is sinking like a duck in a tailing pond.

The Alberta oil gang are on their way to the not so OK Corral.

And I can't wait for the happy ending... 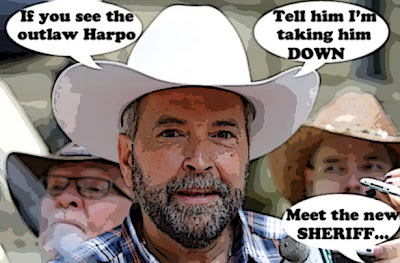 Thanks, everyone knows Gateway is dead, Harper will ride the pipeline to the bitter end, someone has some splaining to do to Petro China and Sinopec..

Those pesky Chinese probably want their $300 million back, what $300 million you might ask..That is indeed the question, hope those political types haven`t spent too much.

Ya you little red-neck premier did you enjoy watching the three horses die for your entertainment?

Mulcair called Alberta and Herr harpo out on the "dutch disease" they attacked him, meanwhile back at the ranch... turns out both the feds and the provincial government of Alberta have SECRET leaked reports that confirms exactly what Mulcair had the courage to report to the federal parliament...

Mount Simon you humor never fails to elude me:))

I'm trying to be shocked, by the cheeky cartoons. However, I'm laughing too hard.

Harper is really falling down hard, on his esteem with Canadians. He is being sneered at by Canadians and other country's. That Redford supports Harper in his lies, deceit, corruption, dirty tactics and dirty politics, is her undoing. Enbridge has done nothing other than, also lie and deceive.

BC Premier Christy Clark, taking Enbridge to task, over their spills?? What a crock. Read the Blog Borg Collective web site. Look at the huge donations Enbridge made to the BC Liberals. Hold your noses while you read.

The people of BC will fight Harper, Enbridge and Redford, right to the last ditch. Alberta has now had, three major pipeline bursts. Redford has the gall to say, this is out of the ordinary??? Those spills can't even be cleaned up.

Although, as you know, Simon, I agree with everything you have to say, I really really hate that you put that redneck yahoo Danielle Smith on the back of a pig- the cleverest of all animals, far more intelligent than any dog, and deserving of our respect and appreciation for all that fine food they throw our way..not to be the squealing recipient of Ms Smith's nastiness...just sayin'...

I too would like to see more of our oil refined here. Mulcair and the NDP though really need to find a way to get their message through to Albertans. I'm surprised with Redford's reaction to all this as she is actually quite liberal (at least compared to the disasters that preceded her.) If Mulcair can't get his message through then I feel he will only succeed in driving voters to the Wildrose since voting Liberal and NDP here is pretty much a waste unless something changes drastically in the next couple years.

"pig- the cleverest of all animals,"

then that means Harper beats us all?

hi Grant...I hope you're right.Any normal leader would realize that the game is up. But Harper is such a fanatic, and a tool of Big Oil, I'm afraid I won't believe it until I see it....

hi Mogs...If Redford had said she was too busy at the office, it might have sounded reasonable. But saying she was too busy "stampeding" was the absolute limit. And yes, it will probably end with Stephen Harper sinking like a duck, squawking as he goes down "Joe Oliver where are you? You told me I could drink it..." ;)

hi anonymous...I can't deny that I am enjoying seeing Stephen Harper popularity and credibility going down the drain. And of course this is music to my ears:

The people of BC will fight Harper, Enbridge and Redford, right to the last ditch.

Harper and his thugs have bullied the decent people of this country forever, but now it's OUR turn...

hi mizdarlin...it's funny you should raise this point because believe it or not I have thought about it. Pigs have been slandered throughout the ages, and every time I see Charlotte, the enormous pig at the little hobby farm near where I live, I always feel guilty. But as I tell her, I mean the pigs of Animal farm, the ones that betrayed the rest of us, and she seems satisfied.

P.S. the day she doesn't accept my explanation I shall have to use hyenas... ;)

hi Way Way Up... you know I find myself agreeing with everything you say these days. And it has to stop. ;)
But seriously, I think Albertans should welcome Mulcair's suggestions, because I truly do believe it would be good for Alberta and Canada. It doesn't make sense to export our oil so cheaply, when we are importing so much from other countries. Doesn't it make more sense to try to defuse an ugly situation, and make all of us better off?

She would look good on the back of a slavering hyena...

No, Anonymous..if that is your real name..it means that calling Harper a 'pig' is tantamount to calling a pig 'Harper'..and that I will not stand for...

"you told me I couldn't sink in it", Herr Harper to Joe Oliver;)

He already knew he could not drink it hell everyone in Alberta knows it and the real ranchers are pissed off, righteously so...

The first nations feel totally left out, they want to know when Custer's (Harper's) last stand is going to commence?