Cons, Pensions, and the War on Young Canadians 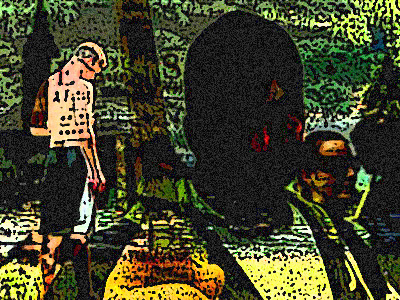 If you want to survive Canada's Summer of Anger, there are two subjects you absolutely must NOT discuss with your fellow hosers.

One...who is to blame for the Vancouver riot? Because chances are you'll have to listen to some deranged rant about how young people are inherently dumb and dangerous. How they HUMILIATED Canada. And how they should be shamed, jailed, whipped, and their lives ruined FOREVER.

Which can ruin your day eh?

And two...anything to do with the postal lockout.

Because then you might have to listen to a lengthy and foamy diatribe about how those unionized workers are lazy, greedy, PARASITES, who are giving themselves juicy pensions with OUR tax dollars. And how DARE they have a pension when I don't ???!!!

(1) The postal service workers make millions and millions of dollars in PROFIT for the government. They don't depend on the largesse of taxpayers, and the only people that do are the ones with the best performing pensions in the country.

(2) The attempt to create two kinds of workers at Canada Post is part of a larger campaign to do away with pensions altogether, and an all out assault on the rights of young Canadians.

(3) Stephen Harper and his Cons are out to destroy public pensions, and what's left of the union movement in Canada. Because for them and the big business porkers, pensions are SOCIALISM. And unions are The Enemy.

And they know that if young Canadians are barely able to support themselves, they'll be less likely to join a union, and less able or willing to support the elderly.

So we'll ALL suffer, the race to the bottom will continue, and people will end up gnawing on each other in the darkness of a capitalist jungle. While the fat cats look down on us from their fortresses or their executive jets, rattle their jewels, swill their champagne, and laugh their porky asses off.

Which is when I start thinking of what happened in Vancouver.  And wonder what might happen when young Canadians realize that their future has been stolen, their planet has been torched. And find a REAL reason to riot... But for Godzilla's sake, whatever you do, don't mention that to anyone you don't know really well eh? Or you might be attacked or publicly SHAMED.

And this too is true:

If you are under the age of 35, pay close attention. Your standard of living, and that of your children, is being decided right now in the boardroom, the workplace and even on the picket line. Sooner rather than later, you will need to pick a side.

We are heading for an ideological and generational struggle the likes of which most Canadians can't even IMAGINE.

The Cons and their corporate masters are preparing to wage war on young and old Canadians.

And it IS time to pick sides.

I burst out laughing when I read an article that suggested that the postal corporation, although making a profit, was declining in the amount of profit and so it needed to go private - ha ha ha. Only in the Con and corporate loser world would that sound rational.

hi Jan...yes isn't that typical? Since when was it decreed that a public service had to make more and more profits at the expense of its workers?
It's clear to me that the Cons are just trying to discredit the corporation so they can privatize it. Which in almost every case just means lower wages, no unions, and everybody pays more for less.
As you say, only in the corporate loser world would that sound rational...