Stephen Harper and the Mask: The Sequel 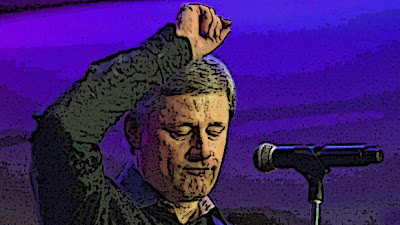 Prime Minister Stephen Harper took the stage at the Conservative caucus Christmas party in Ottawa on Wednesday night, playing the piano and belting out a number of rock hits.

OMG. You know what that means? I'm surprised he didn't hum "I'm Dreaming of an Early Election."

And can you believe he actually had the nerve to sing Jumpin' Jack Flash. *Gasp*

Last year his version of Let it Be was unbearable. If John Lennon had been alive he would have ordered Yoko to scream at him. But this is BLASPHEMY !!!!!!! Keith where are you ??????

Although now that I think about it...when Mick sings that song it's a pretty neat weird tune.

But when Harper sings it it sounds even more disturbing...and an ad for Big Oil.

Which reminds me eh? Now can we call him NERO. For playing the piano while the planet burns.

Canada's Environment Minister John Baird, who has been criticized at the conference for not delivering on a pledge in 2007 to regulate the industry, declined an interview request because he had a long and delayed flight from Canada into the Mexican resort.

And John Baird goes to the beach... 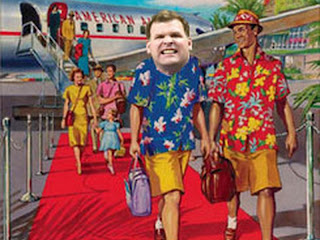 Forget the oil sands. Pass me the suntan oil. Honey.

Oh boy. Can you believe those Cons? One moment they're pretending to be nice guys, the next moment they are eco-criminals, deranged theocons, and human rights abusers.

But of course they can't fool me eh?

I remember the last carefully staged performance all too well. How they faked the official photo.

How they hoped it would give Great Pretty Nice Ugly Leader the majority he craves so much.

By making him look all sweet and cuddly.

And how it almost worked. Until Harper ate the kitten AND the teddy bear.

Gawd. How spooky. It all looks so familiar. And of course my lyrics haven't changed either eh?

Organize, unite, give those foul Cons the hook.

Before they destroy our country.

Before they destroy the WORLD...
Posted by Simon at 12:09 PM

Ugh. Just ugh. I have no more words about this.

The cat video is, however, one of the most compelling cute videos that I've ever seen of a cat.

That is what I will focus on, the cat. Not the screeching troll.

Thanks for the Unicorn chaser Simon

hi Stewart...Yes it's horrifying isn't it? I know Harper will do anything to try to win his precious majority, but that's ridiculous eh?
And yes, that kitty was adorable. That's why I placed it right next to my video, for...um...dramatic effect... ;)

Yes I think that Harper was really showing his true colors. It's shocking how he can be so flagrantly obvious and get away with it. Just tonight he was standing up for asbestos mining, a toxic product that Canada used NAFTA to block environmental standards in (Mexico?) and keep the exports flowing even though it is mostly banned here. (Mind you the asbestos suit was under the Liberals I think.)
Martin in Victoria