What do you do if you see two gay men kissing? 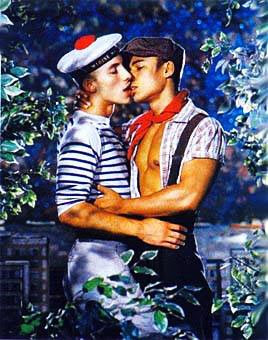 Caller: "We have a couple of men sitting out on the bench that have been kissing and drooling all over each other for the past hour or so. It's not against the law, right?"

Operator: "Not to the best of my knowledge it's not."

Caller: "So there's no complaint I could make or have?"

Operator: "I imagine you could complain if you like ma'am. We can always send an officer down there."

And so they did. I wish I was shocked. I wish I was surprised. But I'm not. Of all the naked ugly prejudice straight people hurl at us, few things are worse than their reaction to a gay kiss.

The sight of two men kissing seems to drive them...including many who should know better... into foaming convulsions of fear and loathing.

If you've ever been at a movie....and two guys kiss on the screen...you know what I mean.The whole place erupts with dismissive laughter, phews, or other expressions of hate and disgust.

I wonder if they ever wonder what gay people sitting there in the dark feel about that. Or whether it ruins the movie for them. Or what kind of evil message it sends out.

I don't know from what part of their vestigial reptilian brains this life denying irrational prejudice springs from.

But I do know where the original hatred comes from.Straight out of the primeval slime of crazy religion.

And twisted homophobes like the ones who are launching a boycott to protest against a soap opera kiss.

A kiss as sweet and as innocent as this one...

Anyone who finds that offensive (apart from the script or the acting) or gets a nervous tic, or feels dizzy or nauseous, or full of uncontrollable rage, or develops a sudden fever to murder all gay people, should consult their vets immediately and be tested for rabies.

But it does give me an idea.

You know because of my dour Scottish background I'm not the kind of guy who likes to suck face in public. And neither does Sébastien.

But now that I know how much a humble gay kiss bothers the crazy bigots. And exposes them as the inhuman monsters they are.

Imagine me as a hummingbird divebombing a flower....zzzzzzzzzZOOM...*SPLAT * ... SMOOCH!!

And sometimes it's easy....

IT'S A SHAME THAT GAYS CAN'T ADMIT THAT THERE MUST BE A GOOD REASON WHY PEOPLE IN GENERAL ALWAYS RE-ACT TO UN-NATUAL ACTS. IT'S LIKE WATCHING A GUITAR PLAYER TRY TO STICK ONE END OF HIS GUITAR CORD INTO THE OTHER END OF THE CORD. IT'S UN-NATUAL!!! YOU GET NOTHING WHEN YOU CONNECT NEGATIVE TO NEGATIVE, OR POSITIVE TO POSITIVE. EVEN ANIMALS NO BETTER. THEY WANT TO BLAME RELIGION FOR PEOPLE NATUAL REACTION. IF THEY REALLY WANTED TO KNOW THE TRUE, THEY WOULD SEE THAT GOD LIST HOMOSEXUAL ACTS RIGHT ALONG WITH: MURDER, STEALING, ADULTRY, ETC. GOD DON'T HATE THE PERSON, HE HATES THE ACT. I DON'T HATE THE PERSON, I HATE THE ACT. GOD ALSO HATE THE LUST OF STREIGHT PEOPLE ALSO. HE'S DOESN'T CARE IF THEY CALL IT LOVE. I KNOW WHAT I SAY WILL NOT CHANGE MANY MINDS. LUST IS A POWERFUL THING. IT'S GONNA TAKE THE RETURN OF CHRIST TO SOLVE ALL EVIL. HE DIDN'T DIE TO SAVE US IN SIN, BUT FROM SIN. THINK ABOUT IT!!!

My own reaction to a public display of affection/kissing is ohhhhhhhhh sweet. A public display of lust - not so much as I feel I am invading someone’s privacy - but that's just me and I have devised my own solution ..... simple but it works . . . . DON'T LOOK.

For me it's not about gender, it's about my sensibilities.

I would much rather see two people kissing than two people beating on each other.

I was going to point out Tony’s obvious moral deficiencies, not to mention his linguistic ones, but it’s a bit like shooting fish in a barrel. There’s no point in deconstructing something that has already fallen apart.

Why is it that religion attracts such nitwits? And why, oh why do these crude, imbecilic representatives of religious hatred always have to TYPE WITH THEIR FUCKING CAPS LOCK ON?

There will always been arrogance, immaturity & hatred towards homosexuals, no matter how much we expose or hide from the public eye...A prick will always be one, the same as we cannot change our orientation, they cannot stop being pricks...

I honestly believe, until their own Son/Daughter or best friend pops up one day and says "Im Gay" they don't need to understand, they don't have cause for reason to except homosexuality.

But it is their ignorance and intolerance to change that makes the world a truly ugly place to live. And before they start throwing the will of God in our faces, they should dig around in his back yard a little deeper, for all is not what the bible has to offer.

that is retarded. i hate to say it but it is everywhere. many straight people who are "ok" with gays would start complaining if they saw two men kiss vs. a man and a woman kiss. bah.

by the way, i mentioned your blog on my first year computer course assignment:

Hi Tony...you are entitled to believe what you want...and I would defend your right to do that.
But don't waste your time telling me how to live my life. Because I believe in love not lust...and any religion that equates gay love with murder and stealing is absolutely NUTS. If we want to make a better world here on earth we have to stop hating and start helping each other. You know I'm not religious but I thought Jesus was all about love. YOU should think about that....

Hi Sassy...yeah I suppose it is funny.Even though it is a sign of hideous prejudice.
As I mentioned in my post I'm not much for public displays of affection. Although I am a hugger :)
But when I see a young straight couple kissing it makes me smile and feel happy.
So I expect the same in return.
As for public lust...everyone should save it for the bedroom.
But it's still better than hurting someone...

But I know what you mean about the religious and their obsession wth telling everyone how to live their lives. It's maddening.
Especially since I'm practically a gay saint !!!!
Their objections to gay marriage were bad enough...but when they start attacking our humanity or our love that's the limit.
They can just go and fuck themselves...

But I know what you mean about the religious and their obsession wth telling everyone how to live their lives. It's maddening.
Especially since I'm practically a gay saint !!!!
Their objections to gay marriage were bad enough...but when they start attacking our humanity or our love that's the limit.
They can just go and fuck themselves...

Hi Sh@ney!!! right on. You know although I'm an atheist I would love it if religions were a force for good. But they have gone completely off the deep end in recent years and now they're a force for evil.
The only good thing is that our cause is loving and just and because of that in the end we will prevail.
They can't beat our love and they shouldn't even try !!! :)

Hi Rashid!!! you're right it isn't fair. I'm sure that like me you never hear gay people putting straight people down. So what gives them the idea that it's ok to put us down?
As I mentioned in my post when you deny human beings the right to love each other you are making them less than human.
But don't worry I'm puckering up my lips. A kiss is a kiss is a kiss. Unless you're gay and then it's a political act.
Nothing better than mixing politics and pleasure !! :)

I think people should be free to express themselves in public with a kiss no matter whether it's a gay or straight couple. I've never been one to show public displays of affection (unless it's to hug, I love hugs). Whether a gay couple or straight couple you should be able to kiss in public and have no one say anything.

I believe religion is a big part of people's ignorance and stupidity in not accepting gays. Some religions even call it a sin... hah! I say love whoever you want, as long as both parties are willing. Who you love, kiss, sleep with, or share your life with should be totally up to the two people involved, not some rules (inspired by religion or old government guys) made by other people who don't have anything to do with individual relationships.

It's your choice whether you believe in God or not, or whether you follow a religion or not. Loving has the same choice. Love who you want, where you want, and how you want! The only thing you need to watch in public is indecent exposure - which kissing is not, no matter how much saliva is involved.

BTW, I'm a married straight woman with two great sons. My bridesmaid is my best friend and she's very happy with her wife. They participate in the AIDS Life Cycle in San Francisco every year, and I totally support them. A couple years ago when people vote against gay marriage in California (and other states) I was appalled! It really showed how much hatred, bigotry and misunderstanding still exists in the world. Why was gay marriage voted against? One word: religion! The biggest, wealthiest religions spread their own campaign throughout their single-minded, backwards thinking communities and spread lies (flat out, blatant lies) about what the new law would do. I hope one day society will grow up, figure out that they can think for themselves, and realize that people should be with who they love not who someone else tells them to be with.

Oh, and religions can't be a force of good, cranky old, sex depraved men are in charge of religions. Religions follow a fear-based theology that are meant to make people pay and unquestioningly follow. Religion takes away your freedom, free will and free thinking.

Believe in what you want, not what someone tells you to believe.

One last comment. If being gay is unnatural or a sin (which I know it's not, but work with me here), then why can't they live their sinful lives happy and every other righteous bastard leave them the hell alone to enjoy what little time we have on the Earth!

You're so funny.. XD because of all the sarcasm... it's sarcasm right? lol

Once more, I have seen, touched and analyzed transitional fossils in person. Therefore
might you in the event that you bothered.