The Pitbull, the Puppy, and the Cockatoo 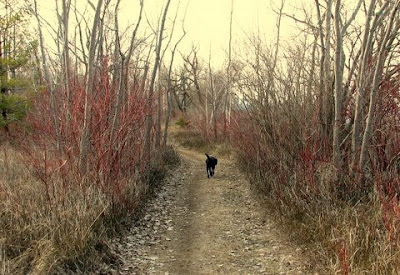 Whenever I go for a walk with my dog I'm always afraid that I'm going to bump into the neighbourhood's white trash redneck rockpig. Holding on ...with both hands.... to his scary vicious pitbull.

That is always foaming at the mouth, snarling and lunging and choking itself with its spiked collar .... trying to get at my old gentle lab. Who just ignores him and keeps plodding along.

It's horrible. I'm always afraid the pitbull is going to break free, and turn Kerouac into a bloody meatball right in front of me.

Which would probably drive me to stab or bite the Hound from Hell to death, and then kill the redneck rockpig by strangling him with his mullet.

Only to have to spend the next twenty five years behind bars.... mourning Kerouac....vowing MORE revenge when I get out.....being gang raped in the showers....while being forced to survive on the à la carte pen cuisine of Kraft dinner.... and MEATBALLS.

Which would be PAINFULLY humiliating as well as heartbreaking.

So I'm glad that the breed is now banned in the province.

But what I can't understand is why this pitbull has to die. 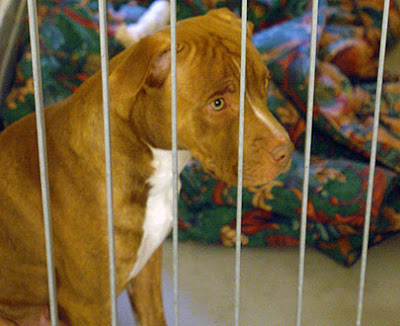 It doesn't seem right. It seems cruel and wrong.

It wasn't his fault that he was born a pitbull. Or given a name like Rambo. And he's never done anything except hop a fence.

Why cage him and kill him? Wouldn't it be simpler and more effective to go after the mouthbreathing idiots who keep on breeding and selling these poor doomed animals?

Hitting them with huge fines, or caging THEM in prisons. So they can live on meatballs. Instead of chips and beer. And of course service every con in the pen.

It's seems only fitting.

Yeah right Simon. Like that's really going to happen. In your dreams. What's next?

A dog being bullied by a BIRD?

Well now that you mention it....

Where's a pit bull when you NEED one?

Somebody PLEASE save Rambo.

What would we do without them? 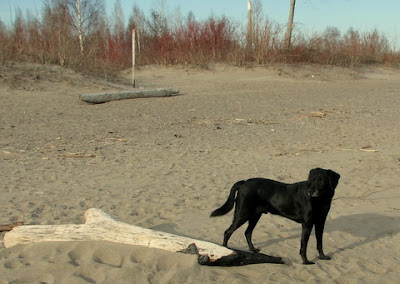 BTW. In case you hadn't noticed...ahem...blogging may be LIGHTER than usual.For this OBVIOUS reason.

OMG.I can't fucking BELIEVE it. Les Glorieux are back.

Thanks for the cute video.

You are so right about Pit Bulls and owners/breeders Simon.

Shortly after the Pit Bull ban came into effect I came across a young male of that breed. He was lost and frantically trying to get into a car. The car owner was not a dog-person and decided that the best course of action was to call the Humane Society. I offered to take the dog away (thinking that his fate was sealed if the Humane Society came, as he could not be put up for adoption and had no ID tag for an owner contact number). No way of knowing if he was micro-chipped without alerting the authorities.

This dog was well trained, and it was obvious that he as well cared for. A very sweet and friendly dog.

End result was that I took this dog to someone in the neighbourhood who already had a Pit Bull and he was able to find a new home for this dog, in a province which does not have a Pit Bull ban. I checked in a few weeks later and was told that the dog had settled in nicely to the new home and that his new owners were delighted with him.

Of course, finding the original owners (who by all indications of the dogs apparent good health and excellent socialization – must have been loving humans) would have been the best possible outcome but as that did not seem feasible, at least the dog was not sentenced to death.

Just a brief comment of breeds and dog owners. I often see macho young men with large breeds (Rotweliers, Dobermans etc), who walk their dogs on very short leashes and yank them away from other dogs and people, thus causing fear-aggression. These fellows do not have theses dogs as pets or companions but rather as things to enhance their images of tough guys.

I never told anyone on my blog but when I posted the eulogy to my cat Peter, my little buddy who I loved, he was killed by my neighbors dogs. I was sitting at my desk and heard a scream that I knew was his. I ran outside and saw him being tossed around between four dogs in my back yard and by the time I rescued him and rushed him to the vet who was thankfully around the corner I was told to let him die quickly so he wouldn’t suffer any more. There was nothing left for me to do but be there for him as the vet injected the needle while I said goodbye.

I went through all the channels with the city, I have mountains of paper work, I documented everything and that fuckers dogs are still running around in my back yard because the dude won’t build a fence on his own property.

I have two decks that I can’t use and my friends have told me they are terrified to go into my back yard because of those dogs.

Don’t get me wrong, I love dogs but I have a situation where I don’t love their owner. He’s gay, he fancies himself a redneck, he has a very pretty victim for a boyfriend. But he refuses to answer to anyone even when I got frustrated & put my boot to his door and yelled at him in the middle of Queen Street.

He lies, he cheats, my back yard is knee deep in dog shit. I have nothing left to do but call my lawyer and sue the city. There is no point in suing him so I have to go after the city for negligence and it will cost me thousands.

These are the untold stories of our city. All I want is for my neighbor to take responsibility for having those dogs and he refuses to do it. It cost me my cat’s life, I can’t use my yard, and the city went through the motions and did nothing.

Thank you Simon, I guess I just needed to vent.

Hi Sassy!!! I'm glad you liked it...they were both cute weren't they? :)
As you know I love animals and all dogs including pitbulls. I've met a few gentle ones and they were as sucky as Kerouac.
Although I could never really trust them...especially since one came into the bunker once... walked up to Kerouac's bone that he had been chewing on for days. And crunched it to pieces in about thirty seconds!!!! They might be good as gold...but I would always be afraid that something as innocent as a small child running might set them off.
But you're right about the owners. So many of them seem to be these strutting macho young guys who like big mean dogs because it makes them feel like big men.Pathetic. Nine times out of ten a dog turns mean because its owner treats it badly. My view is that if you can't raise a dog with love and commitment don't get one.
Of course I SPOIL Kerouac so he doesn't listen to me anymore...and still rolls on dead birds or fish even though I scream at him. Because he knows I would never hit him. So he takes FULL advantage. But I love him anyway :)

Hi Bruce!!! OMG. How horrible. I'm so sorry. I remember how you never said why Peter died so I assumed it was of old age. I can't even imagine how awful that must have been. And I don't even want to think how I might have reacted.How sad...and infuriating.
I'm happy to say my dog gets on great with cats. He ignores them and they ignore him.
The only crature he's an absolute terror with is squirrels. He likes to stalk them like a lion, and then charge. But I tip the squirrels off if gets too close so he never has a chance of catching one.
As for that awful dog owner I'm afraid to say there's a lot of them like him. I can't believe the number of aggressive dogs in the city. And as for the dog shit problem it's hideous and disgusting too. Especially when the snow melts. As a dog owner it makes me so ashamed that I sometimes find myself picking up frozen turds from other dogs as well as the steaming ones from his excellency....which REALLY pisses me off... because I don't want people to think that I'm a pig too.
I also can't believe the trouble you have had to go through. And the fact that after everything that happened YOU have to pay thousands??? That's absolutely NUTS!!! All I can say is that I hope you tear that pig a new asshole. And that he's lucky he's got a cool civilized person like you for a neighbour. And not someone like ...um...me. Although I suppose I'm also lucky he's not my neighbour or I might REALLY end up getting raped in the pen !!!! ;)

When I read your comment I shuddered and, then went over to your blog to find out about Peter (Jan 07).

Although, it was over a year ago, my sincere belated condolences.

What a sad piece of work your neighbour is.