The Day of Silence and the Day of Noise 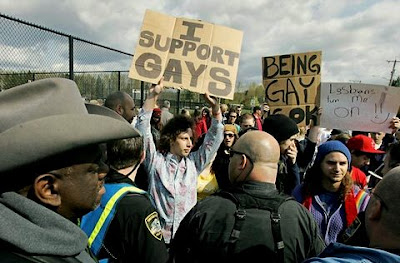 Another Day of Silence is over. It was everything I hoped it would be and more. Just not as silent.

At one Seattle school the bovine homophobe Ken Hutcheson and his "Prayer Warriors" turned the event into a noisy confrontation.

In other schools the silence was broken by heated discussions in classrooms and corridors. And some parents kept their kids at home.

But there were also all kinds of small but magnificent gestures of solidarity.

Jacob said he was the target of glares and some homosexual slurs in return.

"I just kept my head high and kept walking," he said. "I support my friends the way they are. I wish more people saw that."

Which made it all worthwhile.

Straight and gay kids standing up for themselves and others.

Or just breaking the silence that can kill.

By speaking out like this incredibly together kid did...

Awsome. And I LOVE that idea for a Day of Noise.

You know I have to admit it wasn't easy trying to keep my big mouth shut the other day.

But making noise EVERY day of the year....except on the Day of Silence.

For those whose voices are smothered or not heard.

That should be easy...