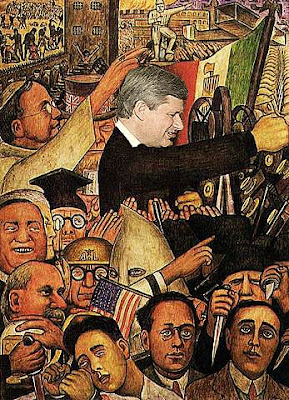 When you watch Question Period on TV, it usually looks like a noisy but fairly civilized Kiwanis club performance.

Except when the politicians/car salesmen have too much to drink .... and then it looks like a cattle auction.

But these days if you see what the cameras don't show you, it looks and sounds like a fascist carnival.

With Stephen Harper and his vile Cons carrying on like a bunch of bullies and thugs.

But what outsiders see - lately, in the case of Dion - is bullying. Picking on the nerd. An ugly undercurrent of anti-intellectualism.....there is a personal edge - a cruelty, almost - to the Harper style, that hits new lows.

You don't have to be a fan of Dion's, or a Liberal, to be sick of it. Unless the corrupted culture changes, the bullies will not be vanquished - not soon, not ever.

OMFG. The Cons as a race of self styled Supermen. Mussolini and his braying blackshirts. The Duce and his douchebags. How disgusting.

Did we really fight the Second World War only to have a creepy gang of fascist bullies...and their weird cult of masculinity.....take over our Parliament?

As if real men bullied anyone. As if those brutish anti-intellectual Cons weren't a pathetic bunch of misogynistic, racist, and homophobic kooks and nerds.

The bad news is that because of the way the cameras are controlled in the House of Commons, Canadians can't see the Cons as they really are.

The good news is the lid has fallen off the garbage can of the Hidden Agenda. So now EVERYBODY can watch the maggots crawling out.

First it was Tom Lukiwski dividing people into A humans and B ones.

Now we have the SoCon homophobe Jason "Chastity" Kenney caught in the Big Lie. 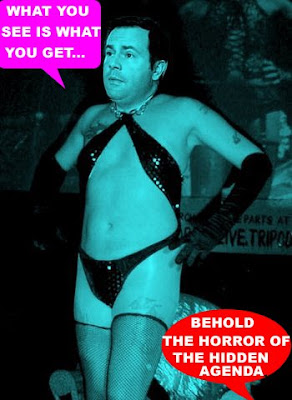 The guy who spends every weekend meeting with ethnic and religious groups promising them they'll be able to bash gays as much as they like if the Cons ever get a majority....now exposed as a racist as well.

Fascist goons in Parliament. The Big Lie. The Hidden Agenda. Dirty haters deciding who is a human and who isn't. Militarism out of control. A crazy leader who thinks he's some kind of macho warrior god....instead of an evil freaky fat nerd with delusions of grandeur.

Oh boy. It's not too hard to figure out where this country is going. Do Canadians really care?

Or has our provincialism and our goonish hockey culture turned us into a nation of bullies and followers?

Life is a cabaret.