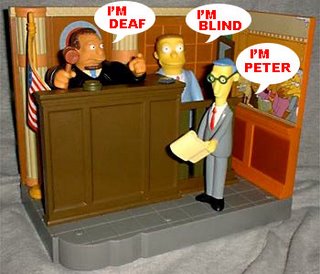 Ok let's get one thing straight right off the bat. This Good Ol' Boy Farce changes nothing. Peter MacKay is still a fratboy lout, a liar and a coward. And, of course, a dog.

Just like Norman Spector, the old codger Con, is going to be known from now on as just a tiresome old bitch.

"I think she's a bitch. It's as simple as that. And I think that 90 percent of men would probably say she's a bitch for the way she's broken up (retired hockey player) Tie Domi's home and the way she dumped Peter MacKay. She is a bitch."

Oh doggy! Throw that ridiculous old man a bone. You sure don't have to scratch very deeply to discover what these women and gay hating cons are all about. If you don't believe me check out this shit sandwich.

"Stronach suffers the slings and arrows of modern life for women everywhere. She's a lot like Jesus would be, had Jesus had better tits and pubic grooming habits."

"She glories her own hard work, despite having had everything in her life handed to her on the end of an aroused penis..."

I don't know what it says about Belinda Stronach. But it sure says everything about the Whories, and the good ol' boys of the freaky ReformCon government. This isn't just piggy political for them. It's clammy creepy piggy personal.

For fuck sake will somebody PLEASE zap that rabid warmongering tabloid terrier with a humongous tranquilizer dart before she goes absolutely nuts!!!!!!

".....Well, the boys are back home now, minus their friends and mates killed in action or accident, and not all of the living have their limbs or their eyes, and all are changed. There are many days when they must wonder if somehow, they aren't still in the presence of some enemy even less readily identifiable than the Taliban." 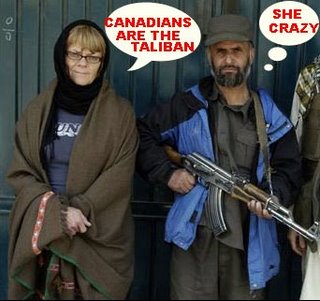 You know when people start calling Canadians the enemy or traitors for opposing a war that can't be won, that's probably a good enough reason to pull our troops out of Afghanistan. Why try to put that broken and barbarous Islamic Republic of a country together, if we're going to rip Canada apart?

As for Crazy Christie she should do us all a favour and stay away from our soldiers. Before she takes being embedded to new lows. Or new heights. As in way way way up our Gung ho military's ass. We don't need propaganda. We need facts. Our soldiers may think this dingo jingo is on their side. One day they won't.

I'd hate to have them come limping out of Afghanistan after their doomed mission is finally over. Still not knowing why they lost. And mumbling crazy talk like "WE WUZ STABBED IN THE BACK...." Just like that wacko Austrian did after the First World War. 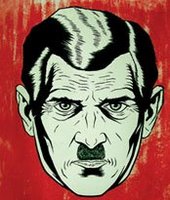 Agree with us or you're a traitor and the hidden enemy...

Look people I'm just a simple Simon. And the pieman knows my number. But it seems to me that the time has come for the progressive forces to connect the dots. Understand the real danger to our country. And put Canada's interests above cheap partisan politics.

We need to form a broad coalition to take on these ReformCons. So their 30 percent doesn't hold our 70 percent hostage.And so while some of us distract these dirty doggies. Other can finish them off.

Hey I said I was simple! But it seems to me a simple choice.

Either we destroy these Nazi Cons who would declare war on millions of their own people.

Or they'll destroy us...

interesting how the nazi comparison's been done on the theocons for the last while, yet it took them some time to sit up and notice before they started hurling that back. now, posts iike yours use some samplings of comparison that are justified and UNDENIABLE. but can they come up with any historic comparisons to their opposition actually being like adolph? NO! they simply hurl the name out with no backing.....hm, something like mackay hurling the name dog with no backng.

p.s. i went to the blog in question. it's really tiresome hearing the same old , sexist, stupid arguements.

first of all, mackay comes from privilege. who's to say he never sleeps around to gain power (if this is what stronach actually does). peter would fuck the queen given the opportunity. and whos to say it wasnt HIM trying to gain power (or a rich, good looking breeder to start a family?). he's the one who stood everything to gain,after all he won't be in politics all his life, a position at magna would be pretty lucrative.

and what's with the being a home wrecker bit? in the end it was domi's decision to have a fling....he's the one with family, where's his responsiblity in all this?

and then there's the 'magna has no women on it's board of directors' . yes, that's a pity but it's a public company so the shareholders elect the board. sheesh , if some had more brains....