I've always had a thing for robots in space movies. I loved the fussy computer in Lost in Space and the way it waved its arms around and shouted out " Warning, Warning." The little garbage can R2-D2 and his clumsy queeny friend C-3PO were my favourite characters in StarWars, along with Darth Vader, of course. 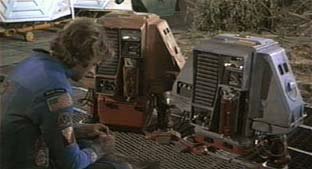 But the two robots I loved the most were Huey and Dewey in the classic eco-space movie Silent Running.


Who could forget the final scene? When Dewey drifts off into space in a giant greenhouse pod, with what's left of the earth's forests, holding his battered watering can. The last hopes of humanity resting on his little drone shoulders. While Bruce Dern and poor injured Huey blow themselves up. And Joan Baez wails away in the background. Believe me it's a memorable moment.

After that Dewey was my absolutely favourite hero robot.

Until this one came along. With its very real and excellent Mars adventure. 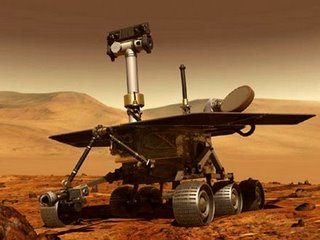 The NASA Mars Rover "Opportunity" has just completed an incredible journey across the Red Planet. For 21 months it has crawled across a bizarre and threatening world to the edge of a magnificent crater. That could help solve the mystery of what happened to Mars. 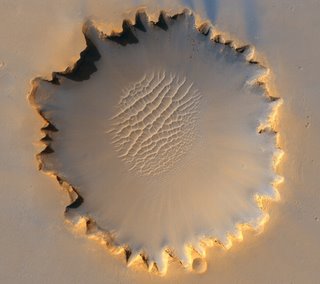 And the best news is it didn't disappear into space like Dewey did. It's been spotted from above. 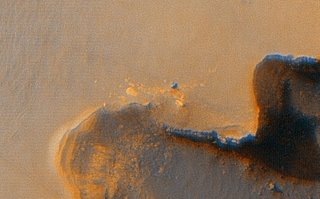 The little blue blob in the centre of the picture
is the Rover Opportunity doing its lonely job.

I don't know about you but I have to admit this stuff gives me goosebumps. Sometimes you just have to raise yourself above the quarrelling monkeys of our world, stare at the pictures of a strange dead planet, and wonder about the really Big Picture. How we fit into this strange awesome universe. And what our fate will be. It helps put everything into perspective.

Anyway, I hope that one day when we have colonies on Mars, they'll bring the little robot "Opportunity" back to earth and put it in a museum. So people can pay tribute to the first real Mars explorer. And the genius of the humans who built it and drove it.

I only hope that the humans of that time won't be living on a scorched and scarred planet, and wondering why we couldn't have built more of those peaceful little robots.

And less of these monstrous things.

In the meantime I'll keep cheering for Opportunity to take as many amazing photographs as it can. Before its batteries finally run down, and it's frozen in time.

But even when that happens and the little robot goes silent I'll never forget its excellent adventure. And how it thrilled me.

Just like I'll never forget Dewey and his watering can either...

well simon, i'm glad the rover gives you goosebumps. a gal like me has other things to say about the space program, but i don't want to burst your bubble :)

Hi Scout! Oh yeah Dr Smith he was my favourite human character. He was definitely gay....But I'm intrigued...you don't like the space program? I know it's a lot of money that could probably be better spent here on earth. And I'm completely opposed to weapons in space. But peaceful robot exploration seems to me to be a way of putting our beautiful planet into perspective. So we take care of it better. On the other hand if I still lived on the faraway planet I came from, and I knew the Barbarian Humans were on their way, I'd probably feel different :)

Hi Havril! Thanks for the tip.I hadn't seen it but I looked it up and you're right it's a good one!!

Although the disturbing part was the supermarket looked awfully familiar