I'm going to be a court jester this year. With a jaunty cardboard crown, a scottish kilt, bandages for leggings, and of course very gay pointy cloth booties with lots and lots of bells. Ring a ding ding ! So I can dance around and drive everyone crazy. Before I get drunk and disorderly and take everything off. Whoopee!!! Doesn't our party sound like it's going to be so much fun???!!!!!! 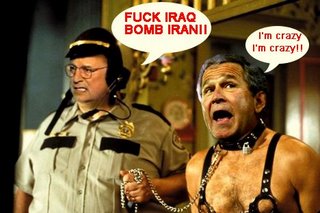 Something tells me it's going to be a really scary one...
The Chimp Cheney regime is on the ropes. With only about two weeks before the midterm elections they are facing disaster.

Will they just let it happen? Will they just give up? And watch their Neocon Reich go down the drain. Glug.Glug. Glug. Or will they try something desperate? These days it pays to believe that paranoia is a higher state of consciousness. So I wouldn't rule anything out.

Take all that internet chatter about how a large U.S. naval taskforce is heading for the Straits of Hormuz. Due to be in position by Halloween. To preempt any possible action by Iran. Attack their nuclear program. Or provide Israel with cover, while the Israelis do the job. And all timed to happen.....just about one week before the mid term elections...

It does sound a bit farfetched. But if you want to know how desperate the Republicans are, all you've got to do is watch their latest ad.


People who can produce a little horror show like that are capable of anything. But I don't think it's going to work. For one thing I don't think it's too smart to remind people about the real terrorists you couldn't catch. Because you were too busy creating new ones in Iraq. And also because the Bushies have tried this approach before. And how many times can you cry wolf?


Once it might have scared people. Now it makes them laugh. So I don't think most Americans will be fooled or scared again by these neocon predators. I think they've learned a hard lesson. It's really tough to lose a war without even knowing who you were really fighting. Or why.

Which makes me wonder what do WE know about who we are really fighting in Afghanistan?

I thought I knew quite a bit until I read this New York Times story. And it really blew my mind. It's a long article. But it's really well worth reading. I doubt you'll feel the same way about Afghanistan afterwards. I know I didn't.

The only ones who can save us from this mess now are Chuck Guite and the Liberal Sponsorship Gang!!!!

We should spring them from prison, just like the Dirty Dozen. And send them to Afghanistan on a mission to identify all the politicians, tribal leaders, war lords and thugs who need to be bribed.

To keep the peace. And not kill us.

Until we can get the fuck out .

In the meantime, just in case Dick Cheney's Halloween Party turns into a real horror show. I'm thinking of swapping my court jester costume. For something a little bit scarier.

But a lot more practical...

So if there are any Halloween wolves out there waiting to jump us. I'll be ready for them!!

The only thing I can't figure out. Ring a ding ding!