Village Idiots and the Klown Klan 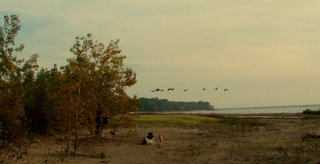 I went down to the beach today, just me and my dog Kerouac. He did his doggy thing. I just tried to chillout after my last angry post. It was a beautiful early fall day. It was easy to see the seasons are changing. But instead of running over the dunes with my dog, as I usually do. I just sat on a log and wondered whether my country was changing too. And leaving me behind.

I've always believed that some bad things could never happen in Canada. That we'd always remain an oasis of sanity in an increasingly crazy world. Always act like Canadians. Now I'm not so sure.

Take the appearance of Environment Minister Rona Ambrose before a Parliamentary Committee today. She used to be the Queen of Stephen Harper's Klown Klan Court.

She was always being photographed next to Great Leader staring adoringly at him. She gave him glamor, he gave her clout. But then he gave her the Environment Ministry and she disappeared. Only to pop up today playing a completely different role.

Once she was the Queen of the Klown Klan Court. Now she's just the Village Idiot. And the first recipient of my new award!!! 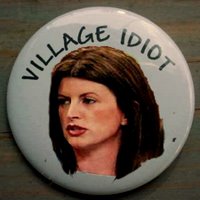 Canadians' No. 1 priority is air quality, meaning the purity of the air they breathe, while climate change is "another issue that they're very concerned with," she said.

"Kyoto did not fail this country," she said. "The Liberal Party of Canada failed Kyoto."

In other words, let's just concentrate on cutting down on air pollution, give the oil industry blanket amnesty, and fuck the rest of the planet. Talk about a mindboggling combination of stupidity and neocon greed. If the village idiot keeps shedding IQ points like that, we'll soon have to water her.

Besides when did that kind of selfishness become a Canadian value?

But wretched Rona wasn't the only recipient of my Village Idiot Award today. Bev Oda got one too. For her appearance before a Parliamentary Committee on the Status of Women. 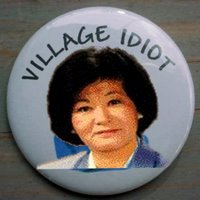 Instead of funding advocacy groups, Oda said taxpayers' dollars should go toward programs that " help women in their daily lives, to help them in their communities."

Translation: no money to help advance the equality rights of women. Lots of money for baking and sewing classes. And all kinds of money for faith-based groups. Sound familiar?

You'd think Oda would know something about inequality and injustice. And when did helping oppressed groups seek justice stop being a Canadian value?

And then there was this story. The one that makes me so angry. But today just made me sad.

"The prime minister has indicated that he is bringing the matter forward -- the issue of same-sex marriage -- on a free vote. And there may be certain options open to the government as to what the response should be in either event, whether that opening is successful or not successful."

When did it become an option to even discuss legitimizing discrimination against a long persecuted minority group? When did that become a Canadian value?

I don't what's happening to my country. I'm not even sure it's mine anymore. I don't understand why more people don't share my fears about its future. Why we are so bloody passive. Why we're letting these crazy neocons and theocons destroy our most precious Canadian values. Without even taking to the streets to try and stop them. Before it's too late.

Maybe we're just too wealthy and greedy and piggy to care about the human rights of others. Or give a damm about the Planet. We just care about ourselves. Maybe Canadians are too small for their country. Maybe this country was born to be swallowed up by the Amerikan Beast . Or rip itself apart.

We'll soon find out. Although it doesn't make any difference to me. I'll still fight for my rights no matter what. I'll never surrender. We'll fight these crazy bigots all alone if we have to.

But until I'm summoned to the trenches for that final battle, I'll still be running with my dog on that beach. Still loving who I want to love. Free as I want to be.

Although I will be wearing this t-shirt a lot. 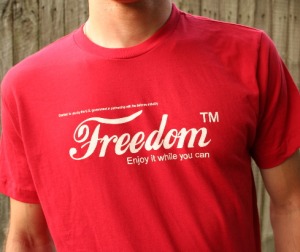 A couple of points, I love autumn - my favourite time of year.

Secondly, if I was a conspiracy theorist, I would suggest that big business knows we have rooted the environment, and it just doesn't give a @#$%.

Short term gain is all that matters. If they get rich in their lifetime, that is the only focus and stuff everything else.

Does that make me sound overly cynical? Yeah, I guess it does ;)

I should have known you would name your dog something like Kerouac.

It’s not like the country changed overnight, we just have a Parliament taken over by bigots and an ineffectual opposition, even with a minority government. The greedy little bastards know this might be the best chance they get so they’re busy re-writing the nation in their own image. It won’t last forever but there will be a mess to clean up when it’s over. In the meantime, all we can do is remind people that what’s happening now isn’t in the best interest of, or even the true nature of Canada.

I have to get that shirt.

Oh, THANK YOU for getting rid of that damned word verification.

well i'm sorry you are going through your grieving about canada. i barely remember what the process was like, it was so many years ago....can't remember the last time i sung the anthym....long ago.

amost hate to say this but the cons are only the epitomy of what has existed for a long time. mind you, aboriginal perspective cuts through the crap of the hundreds of years of bullshit.

would it be of any consolence to say you'll move out of anger and tears soon to acceptance? when that happens you'll have the strength to hold above and not let the bastards grind you down.

Hi Beep! I wonder what Australia is like in the fall. Do the leaves change colours like they do here? Of course the difference is that by the time fall arrives you're probably glad to get some relief from your long and hot summer. While, alas, here we're mourning the end of our teeny weeny one :(
But I agree with you completely about the big business types. A system that celebrates profit and greed will eventually torch the planet and doom us all....

Hi Bruce! Uh oh....I don't like the sound of that...about the pooch I mean. But when I got him I was going through my Kerouac phase... When I heard he was a tortured homosexual, as well as French Canadian, I naturally swooned over him and the other beats.And it turned out to be an inspired choice, as Kerouac aka Kerry, Big Boy, or Shit Bag, has more on the road and air miles than most dogs! And definitely more than Kerouac who as you know couldn't even drive!!!
Still I guess it is a little pretentious.Ugh. But since most people have forgotten poor Jack it doesn't really matter...I hope you're right about sanity prevailing. The cold hard facts seem to back you up. But there's a cold chill in the air that makes me really wonder.I hope it's just autumn...

Hey Scout! I'm still not prepared to give up this country for lost. I'm afraid they're going to pry it loose from my cold dead hands. Although I understand why aboriginal people lost their faith in this country long ago.
As for acceptance...I know what you mean...and you have to do whatever makes you strong...I just hate the sound of that word. I long ago accepted who I am. But I'll never accept to live, for even one millionth of a second, as anything less than a full class citizen...So I have to save up some anger for that. They have sown a hateful wind. Now let them reap the whirlwind....

hey simon, don't give up your anger!!! that's what's needed from young warriors. its just age that transforms our anger into a mellower sort....a kind of 'we watch them, we know what they're doing, and we have every capacity to walk tall and be patient because in the end they view life as win or lose....people like that self-defeat'.

the shame is the toll on lives it takes. but you are very very correct in the wind analogy because nature is the ultimate ruler and we are ALL as free as the winds in our minds , untouchable by them.

each whirlwind that comes from each person makes for a huricane they've never seen the likes of. katrina will pale.