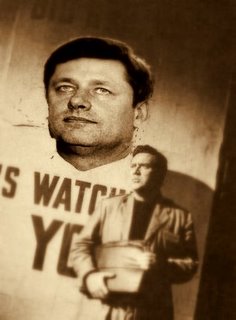 I know Stephen Harper so well.... I've studied him like a bug for years. I've warned about his authoritarian tendencies. And his fatal character flaw. But even after all of that I still can't quite place him myself. I can't decide whether he's Big Brother, the enigmatic, sinister tyrant from Orwell's "1984." 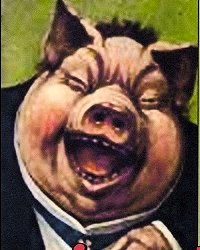 The brutish porker tyrant from Orwell's "Animal Farm."
All tyrants look the same to me. I get them all mixed up.

But then so does Great Leader . He's got a tyrant identity crisis.

When he stood up in the House of Commons to defend Peter Mackay, he was obviously acting like Napoleon. Because only a pig would do that.

But then came the story about how Harper's little pet Josee Verner had managed to get into Afghanistan for a pathetic little photo-op.

While those poor Senators were held up by the Cons, and then mugged....

"The Senate's security and defence committee wanted to go to Afghanistan to investigate the reconstruction spending, but they couldn't get in and had to spend six days in a Dubai hotel. The trip expenses the committee racked up while waiting for permission have been held up for scrutiny for being spent on the public dime."

Now that's Big Brother! Especially the part about publicly humiliating them by investigating their expenses.

Then there was the little nugget that Garth Turner let slip. About how Great Leader has been politicizing Parliamentary committees and turning them into the kind of message control sessions you would expect to encounter in a place like North Korea.

"This government has actually had a PMO senior staffer in national caucus recently instructing MPs on how to politicize the committees and turn them into instruments of government policy. Tory MPs are instructed to meet before committee meetings to plan strategy to help ministers, and to be assigned questions to ask witnesses. Attendance at these meetings is mandatory, and recorded..."

That's Big Brother too. Although when you think of the ReformCon caucus sucking it all up like flunkies..... maybe it's also a little Animal Farm..... 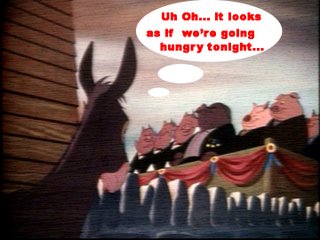 And then there's this story.
Which is both Big Brother and Napoleon at the same time.

Porky because it shows what a cheap and savage political game Harper is playing.

And Big Brother because although Sandra "Squealer" Buckler claimed that:

".....There are some very serious issues before Parliament, and the citizens of London North Centre and Repentigny deserve to have a voice in those debates...."

They really don't have a voice. The PMO calls the shots.

"Haskett knew about the snap nomination meeting for a Conservative candidate for London-North-Centre even before local party officials and with what a political scientist at Huron University College suspects is encouragement orchestrated by Prime Minister Stephen Harper..."

"He was in charge and he was telling me what to do," Stirling said of his noon-hour chat with Joseph Dow, director of Ontario operations for the Conservative Party of Canada..."

So there you have it. Exposed at last. Now you know what happened to Garth. Forget about the grassroots. Forget about democracy. Harper wants a homophobic wingnut to have the nomination. And What Great Leader wants Great Leader gets.

This ReformCon Party is just Stephen Harper all the time. He's a deeply disturbed control freak. He's a secret religious fanatic. And the most dangerous political leader in Canadian history. If he's acting like a tyrant now, can you imagine what he would be like if he ever got a majority? We'd be forced to call him Big Napoleon!!!

But then I don't really care whether Harper is Napoleon or Big Brother. It's really Harpo's problem not mine. I know that all tyrants always end up getting toppled. No matter what they look or sound like. They always bite the dust. Just like Great Leader will.

The ReformCons can go on and on about how War is Peace. How hating gays is loving them. How Ignorance is Strength. How freedom is slavery. And oinkety oink oink oink....

But Canadians know a tyrant when they see one. And you can count on one thing.

This pig will soon be boinked....

Harper is someone with social values that go back to the McCarthy era, he has an ego that allows him to think he is the only one who can take all the mistakes in history and do them better. He doesn’t understand that historical failures (like his vision of society) happen for a reason. He doesn’t understand that if he has to act like a tyrant it’s because nobody wants what he wants.

I believe this is the literal definition of a fool.

I agree with Bruce, however Stevie is a dangerous fool, and he's trying the Bush gameplan - divide and divide. I hope Canadians are too smart to let it happen, but with idiots such as Kate, Jason, Steve et al, I'm worried.