The Day They Hanged Garth Turner 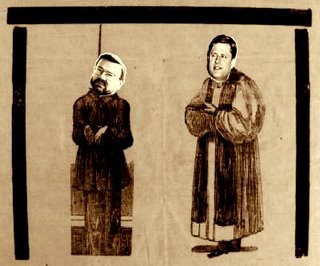 Made the floor disappear under him so to speak. Left him hanging without a Party he had always called his own. Dismantled his computer equipment within minutes of the vote to suspend him. Moved him to the back of the House. Bludgeoned him with their blogs. It was quite a Nazi little show. Or as Paul Wells points out, one that Orwell might have written.

"There was something subtly wrong with Garth Turner. There was something that he lacked: discretion, aloofness, a sort of saving stupidity. You could not say that he was unorthodox. He believed in the principles of Ingsoc (The Conservative Party)...."

"......Yet a faint air of disreputability always clung to him. He said things that would have been better unsaid, he had read too many books, he frequented the Chestnut Tree Cafe, haunt of painters and musicians....."

Ah yes the Chestnut Tree Cafe... Oh sure. It was inevitable. Poor old Garth tried so hard to pretend he was a vibrant part of the New Old Conservative Party, when he was just pain in the ass for the New Old Reform Party. And Stephen Harper's New (Really New) Nazi Government. It wasn't a question of if Garth would get whacked. But when? What I wanted to know was why now?

Then this religious wingnut uber-homophobe surfaced like a bigot beluga on the Don Newman show and kind of explained it all. 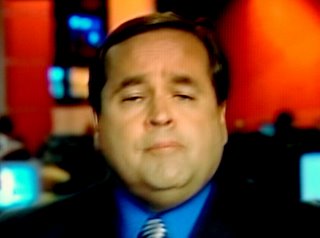 Charles McVety who recently tried to block Turner's nomination because of his support for same-sex marriage, was so obviously overjoyed to see Garth go, I thought for a moment his fat head would explode.

Which, I think you'll agree, would have been a truly horrifying sight. Almost as bad as the end of the world that he believes is imminent. But not before, as he's always telling people, The Battle of Gog and Magog.

But what really had me agog or saying good Goggy today was when the porker homophobe told Newman he had complained to Harper about Turner's attacks on his religious fanatics. And had been very pleased by the way the government had reacted. So pleased you would have thought he had bagged Garth himself. And mounted his head over the altar of his Homophobe Church of the Watch Your Wallet.

Which kind of squares with what Garth had to say today. About the real reason he was wacked.

"The issue [was] my beliefs and policies," he said.

"Turner has been at odds with the party on a number of issues, including the Tories' position on the Kyoto accord and a possible Defence of Religions Act, which would protect public officials who refuse to perform same-sex marriages. .

So that's it. Harper has been throwing a lot of bones recently at the wingnut base of his party. He threw them another chance to kill gay marriage. He threw them the Court Challenges Program. And the Status of Women cuts. He dangled the promise of a so-called Defence of Religions Act over them like a big bloody bone. He wanted to get rid of that thorn in his side. And get political capital in return. So today he threw them Garth.

It's as simple as that........ And then it really isn't. It's more about Stephen Harper and the man he really is. 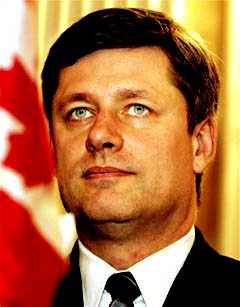 Ever since I started blogging I've tried to warn people about the man who would be Great Leader. How he believes that he owns the truth. His fights with Preston Manning. His scary rages and his dark sulks.

And what would happen if absolute power was given to a man with such a dangerous character flaw.

"The problem is that people who think like Harper can eventually come to think that everyone is against them. Come to believe that only they are in possession of the pure unvarnished truth. That everyone else is either too stupid, or too corrupt, or too weak to take the ruthless measures necessary to get the job done...."

And that was back in May.... Now you see what happened even with a minority. The man has turned into a tyrant right before our eyes. Cabinet Ministers and MPs are muzzled or just used as props. Every little speech or Kiwanis function has to be approved by the PMO. No dissent is tolerated. Now that Garth is gone, Harper is in complete control. Just like he always wanted.

He'll take it way out of the Canadian mainstream. Cripple its chances of ever getting a majority. As he already has.

Until it splits once more into the old Conservative Party and the Old Reform Party. And the right-wing will be marginalized for a generation. As I told a Conservative blogger today. You thought you were getting a Saviour. But what you got was a Terminator. Those Blogging Whories may be too dum and fanatically loyal to Great Leader to understand that. But one day they will...

As for the rest of us, if we don't understand by now what Steven Harper is all about. And what's happening to our country.

What I wouldn't give to have a face to face with this McVety mouthpiece. I think I could handle myself pretty well and make him squirm over his hypocrisy concerning the bible and how it applies to secular law. He certainly is a James Dobson wannabe and if he is not stopped, will trample all over Canada's constitution after Harper and his gang of thugs destroy it. Canadians should become very familiar with McVety and what his plans are for Canada. And people shouldn't fool themselves that he's just after gays either. He's after women, environmental and health and safety regulations, the destruction of separation of church and state, single people, common law couples, health care benefits and many more things that make us a just and civil society. Maybe if Canadians knew what was REALLY going on, they will votes these pricks out on the next election.

I would say anyone that doesn't get what Harpo's about at this point should hold their breath and not let it out.

It's akin to putting your hand on a hot burner over and over, not realizing that the smell of burning pork is from your own hand.

Sadly, I have family members who think Harpo's doing a good job. I ask them "A good job of what, exactly?" and never get a decent response. Like Americans that defend the god forsaken Military Commissions Act...delusions.

It's always darkest before the dawn, right?

Simon, you haven't lost the touch. I just wish the rest of the Reform sheep would wake up and see what Stevo has done.
Back in the late eighties, I was approached by a co-worker to go to a rally for a new party. Reform, they called it, because it was going to reform the way government was conducted. The grassroots would be paramount, the MPs would not be parrots, but would represent their constituency, the PM would not be whipping the MPs, everything would be transparent and above board. I found it rather humerous, as I was also approached in the sixties to support the NDP for the same reasons. Anyway, I passed on the opportunity, perhaps because I've been around politics my entire life and watched the swill being tossed. Even though I was financially conservative, I was socially liberal, and didn't agree with the ruling Liberals on several issues, I truly believed in a strong central government that would provide common programs, such as health and Native affairs, poverty etc across our great country. I thought Preston Manning was a principled man who was stuck in the 19th century, and as I was not ever willing to take us back to that century, I was unwilling to support his platform - I'm female after all and we've suffered discrimination for as long as the gay community.
Stevo has come to represent all my nightmares. Bush lite doesn't even begin to describe him. Peter McKay is as bad - someone who represented himself as one thing, then turned tail and revealed himself in his true colours - power, power and more power. I have more respect for Belinda.
Don't stop expressing your thoughts.

Hi Waterboy! I agree that porker McVety is a loathsome creature indeed. I don't understand why he's risen so fast in the ranks. But the best stuff I've read about him is Marci McDonald's story in Walrus Magazine "Harper and the Theocons." You can read it by signing up for their one-month free trial. And you're right he's against a lot more than gay rights. What stunned me is his opposition to doing anything to save the planet. Lest it delay the arrival of the "Messiah." These people are crazy and should be locked up....

Hey Jay! I know what you mean. I've heard people say the same thing about Harper.People who should know better.I blame it on poor reporting from the dumbo media, as well as our fragmented world. People judge him on this issue or that one and overlook the big picture. The incredible damage he is doing to our country. It has been a dark time. But don't worry brother,I can see the first signs of a new day breaking in the sky !!! Five months ago it looked as if they were heading for a majority. Now they'll be lucky to hang on to power.They're dying on the vine. I'm more hopeful now than I have been for quite a while. Any more of this good news and I'm going to have to start thinking about what I am going to wear to our victory party!!! :)

Hi anonymous! Thanks for your nice comments. And don't worry I'll never give up.I'm just as mad about their assault on the rights of Canadian women, as I am about their neverending war on the gay community. I honestly can't believe the ferocity of their attack on women. That any Canadian government would ever act like that, and do so with so much undisguised glee absolutely sickens me, and makes me really mad.I also feel sorry for Belinda. I quite like her and her progressive views. And I'm disgusted by the way Mackay has apparently tried to intimidate and creep her out. But all of the above is also good for me. It's like throwing coal into my little steam engine.And just keeps me chugging along!